A bit of fun with This Day in History – Richard III

I was culling through my usual list of sites this morning and found out on this date, King Richard III was killed at the Battle of Bosworth Field. Richard has been in the news quite a bit lately, with the discovery of his remains in a church parking lot and reburial. I sat for a few minutes and wondered what the news coverage would be like if our modern 24 hour blood sells extravaganzas provided on the spot coverage.  I nearly short circuited my brain thinking about how Fox would lay on the outrage and decided I couldn’t go down that rabbit hole. Well at least not sober.   From tabloids to the more staid papers – it’s an amusing thought experiment.

Here’s my take on a more conservative approach to his death. 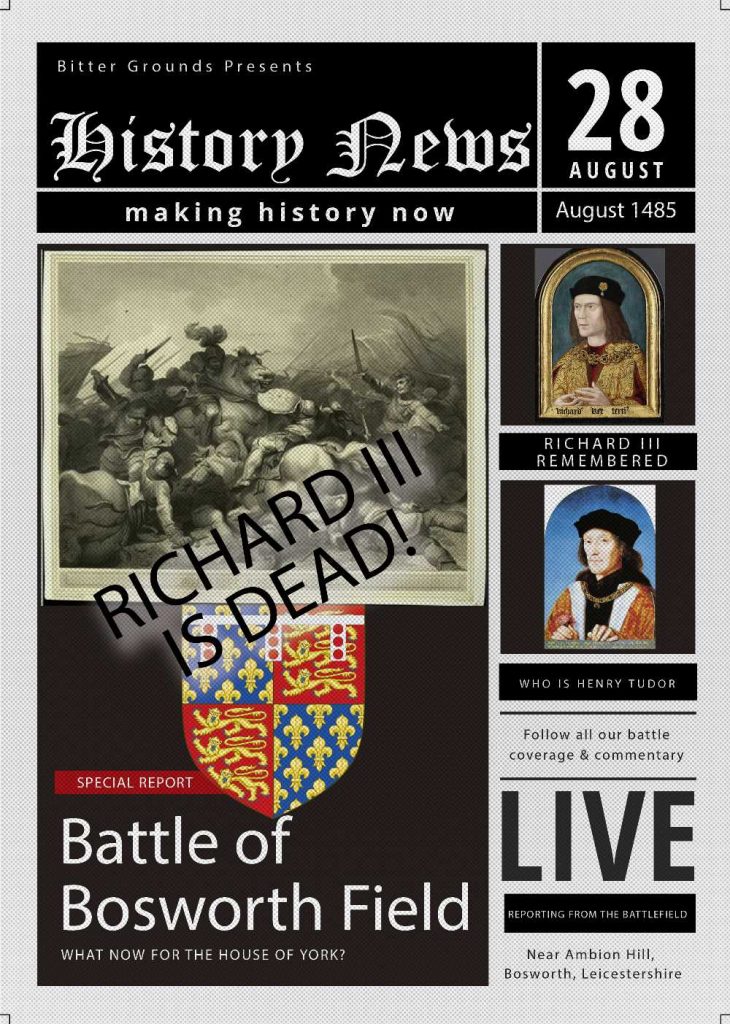 A quick trip to your local library will produce a wealth of excellent books on the subject. I’m pretty sure the librarian would be thrilled to help you select material.  You can also find a treasure trove of online sources that cover the battle and histories of Richard III and Henry VII. Here are a few to get you started:

This Day in History: https://www.history.com/this-day-in-history/battle-of-bosworth-field
Encyclopaedia Britannica  – Battle of Bosworth Field
House of Plantagenet on Wikipedia offers an extensive bibliography for those inclined to dive deep into history https://en.wikipedia.org/wiki/House_of_Plantagenet
Richard III – BBC History page
The Richard III Society has an outstanding website http://www.richardiii.net/
Henry VII – BBC History page
There are a number of Tudor Society sites on the internet –  The Tudor Society  and  The Henry Tudor Society

All the images used are licensed under Creative Commons:

Previous post
Talman auction set for sometime in the fall
John H. Talman stamps will have an auction sometime this…
← Adult fidget spinners
We use cookies to ensure that we give you the best experience on our website. If you continue to use this site we will assume that you are happy with it.OkNoRead more