A little philately, climbing in Nepal & a trip down memory lane 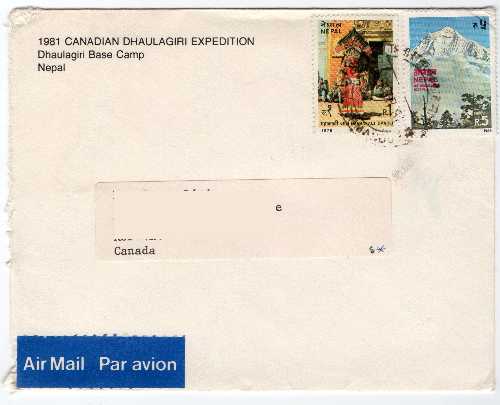 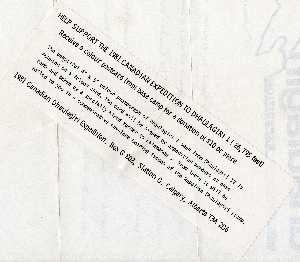 Over Christmas I was rooting around my book shelf, debating whether to get rid of some old text books I’ve had hanging around since my Queen’s university days. I was thumbing through one and found something I had tucked inside way back in ’81:

Back in the early 1980s, a Canadian team of mountain climbers were planned an expedition to Nepal to climb Dhaulagiri, the 7th highest mountain in the world. I remember reading about it in a magazine and running off to the library to look up the location – this was long before internet days so I spent an hour in the stacks reading about Nepal and the region. The team was doing a fund raiser so I whipped off a letter to them asking … you know I can’t remember what I asked. That was a long time ago.

Anyway, I rec’d a letter back from the leader of the team Jon Jones: 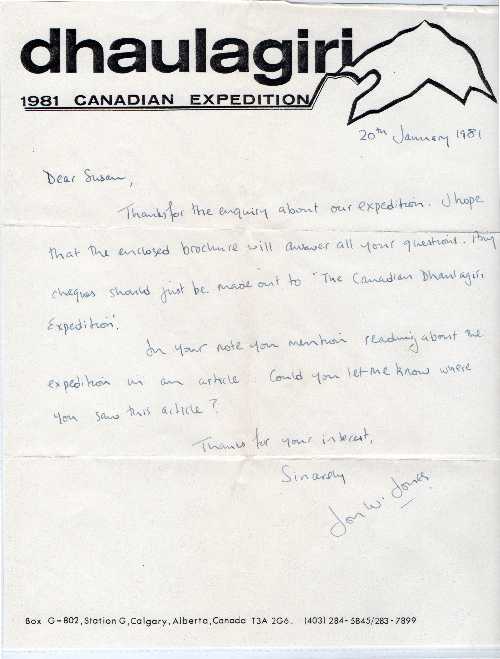 It’s funny, I vividly remember reading the letter, thinking a couple of things – Canadians climbing in the Himalayas and stamps from Nepal! So I scrapped together the princely sum of $10 and sent it off. Now back then, that was a LOT of money. It pretty much meant I did without something. I was a student on a strict budget, there by the grace of loans and grants. It was no small thing to come up with $10 – it represented part of my food budget. But hell, I’d eaten peanut butter sandwiches lunches for years, another weeks would be worth it. Off went my cheque.

Later, I rec’d a card from Nepal, as promised.

The best part were the signatures from all the climbers.

Well… okay and the stamps. The stamps really were my prime motivator. I wanted those stamps. It’s funny, I remember rec’ing the letter from Mr Jones and how excited I was that cold winter day. Getting a letter was always fun, but the prospect of having one from somewhere so exotic … intoxicating. This was in the day you never phoned long distance before 6pm (rates went down after 6), cell phones were strictly Star Trek territory and there was no instant communication. Letters were it.  When the card arrived from Nepal, I propped it up on a book shelf to admire it, but wasn’t sure how to keep it safe.  I knew the stamps would stay on the envelope, but I was still a neophyte collector and wasn’t sure how to display or save envelopes correctly. I was  a student, which meant moving a lot, so I tucked the letter, card and envelope away in a book for safe keeping.  School got in the way, and the cover stayed in the book for decades, forgotten until this past Christmas. So that’s 1, 2, 3 … how many decades? Finally, it’s where it belongs, in my stamp collection, carefully slipped into acid free covers.

I did a bit of research on the crew that went up the mountain and found this:

Dhaulagiri. Our expedition was originally to attempt the southwest pillar but without enough tested Himalayan climbers living in Canada, we changed to the first-ascent route. We were Jon Jones, leader, Dr. Chuck Masters, Jim Elzinga, Don Gardner, my brother Alan and I. We arrived at the first Base Camp at 12,000 feet after 14 days of walking. We eventually established our upper Base Camp at 15,300 feet on April 7. The camps above were mostly at standard places. An intermediate Camp I at 17,000 feet, used only during the first week, was on the way to Advance Base at 18,300 feet. From this camp on the northeast col, the northeast ridge really begins. There were three camps above at 21,000, 23,000 and 24,400 feet. Rope was fixed between 21,500 feet and the last camp so that the less experienced members could move freely between camps. Actually, partly due to sickness, only Alan Burgess, Elzinga and I reached 23,000 feet, supported to 21,000 feet by Masters and Gardner. Shortly after, Elzinga left the expedition when altitude sickness meant he could no longer hope to attempt the summit. The summit was reached by Alan and me on May 17 after a 12-hour day beginning at 24,400 feet.

Turns out, they went on to become Canadian mountaineering legends! Who knew back in ’81. I flatter myself now that my lowly $10 made a difference. I partially donated because I knew I’d never go mountain climbing and this was my way of participating on the fringes.

.. but, yea,  it really was about getting a letter from Nepal.

Previous post
Web design 101 – how not to market your website
I operae on the assumption that it's easy to get…
← North Borneo State – where I torture a bit of history & show a few stamps
We use cookies to ensure that we give you the best experience on our website. If you continue to use this site we will assume that you are happy with it.OkNoRead more