Attack of the ATOMIC SPIDERS at midnight

Ok, I’m admitting to a severe spider phobia.  Snakes, preying mantis (which are the coolest creatures in the entire bug kingdom by the way), all sorts of crawly/flying things … not a problem. Slap a spare pair of legs on that body and my instinct is to go running at top speed in the opposite direction.

I don’t hate spiders; I’m simply knee wobbly terrified of them.  Spiders and I have had a long standing truce over the years, they stay out of my room and I don’t go out of my way to harass them. It’s worked quite well for over 2 decades. Until last night that is.  I was in bed watching some random garbage when a HUGE … I mean H-U-G-E spider skittered up the tv screen. He must have been at least 10” long …. Ok .. he was about ½” long … but he sure as shit looked huge to me.  The first thought that scrambled through my scrambled brains was “OH SHIT OH SHIT OH SHIT”. The second thought was “Can I wake up my 78 year old mother to catch that spider”. I nixed the second idea, but I seriously thought about it. I actually peaked out the door to see if her light was on.  Yes, I am a coward.

So … I spent most of the night wondering where he was. At one point I panicked and thought he was on my bed, which led to a quick whipping off of the covers and a shake (both me and the blankets).  This morning I banged my runners together and shook them, just in case he was lurking there (I really have to stop watching Australian nature shows…. Their damned spiders are the stuff of nightmares) and inspected my clothes before putting them on. Chances are, he isn’t even in the room any longer. But tonight, I’ll don armour and go and search all the crevices.

When I was a kid, vacations with my dad and his wife inevitably ended up in some kind of a spider admiration group hug. Do you know how many spiders there are in the Everglades? No, do you? I could never live there. The two of them would stop at every fricking spider web and ooohhh and awe over it.  Oh and yes, take photos of them…. Yup … photos. Bad enough we were standing in a swamp that had alligators and spiders, they wanted to take souvenir photos of them. I once muttered something about next time they should leave me at home and take the spiders on a nice vacation, which, as you can guess really didn’t go over well.

The weird part is, I have a hard time killing spider. I have a grudging admiration for them and the job they do, despite my unfettered arachnophobia.  I also hate squishing things. First you have to find a magazine you don’t want anymore & then afterwards you have a disgusting mess to clean up. I don’t do well with squishy bug guts on the floor.  Also, the digital age is hell on magazines and I’ll be damned if I’m swatting anything with my tablet.

But, the bigger reason is my sister’s voice. I can hear her whispering over my shoulder saying “you know, if you squish him, he’ll just come back bigger and meaner”. My siblings and I never missed the 2pm monster movie matinee on Saturday afternoons.  All the best atomic bomb paranoia played out with mutated bugs.  Up until her death, my sister and I would still laugh about the “Great Spider Events”.  We shared a room for years and whenever a spider sauntered through, we’d both be up on the beds peaking over the edge at it. We’d have serious discussions about strategies to rid ourselves of the intruder. We had one big problem – we were both dirt sucking cowards. Neither of us wanted to squish the spider or flush it down a sink. You see … we watched too many movies, where the tiny spider turns into this: 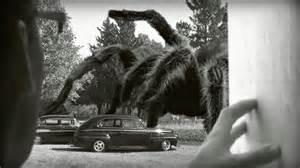 No way we were going to risk a mutant spider coming back to get us so we were faced with trapping it under a glass.  Which in turn led to whispered arguments about which of us was going to do the deed.  Alas, I was smaller and Cindy won most of the arguments. I became adept at dropping a water glass on arachnids. Once he was safely trapped, we’d drag the glass away and leave him somewhere till morning. To be safe, we’d put a book on top of the glass, just in case he used his atomic strength to push the glass over. Logic wasn’t our forte.  In the morning, she’d get one of our brothers to take him away.

Over the years, the fear abated (a bit). Until about 15 years ago when I was under a desk chasing some computer cables for a customer. I pulled the computer away from the wall and reached behind feeling around. Oh … that was such a mistake. My hand landed on a web, complete with bug carcases and the resident spider, which was a pretty good size.  He’d been back there snacking on flies for a long time so was big and plump.  I let out an “OH SHIT”  loud enough to bring the customer running. I backed out from under the desk so fast I banged the top of my head on the desk and desperately tried to shake the spider off.  It had begun to panic as well and was scrambling up my hand and onto my shirt. So there I was, in a customer’s den, doing the dance of the frightened spider.  I was waving my arm around frantically trying to shake the it off, the poor customer was crying out “what happened, what happened” and the spider clinging to me for dear life.  With more wild arm waving I grabbed a magazine and whooshed the spider off. He went flying off somewhere, never to be seen again and I jumped out of the room, still dancing around smacking all parts of my body. I was sure I could feel him crawling under my sleeves for hours.  All I could manage was “spider, spider”.  She raised an eyebrow and said “don’t like ‘em, eh?” Which could be considered a slight understatement.  She got out the vacuum and scooped up the rest of the webbing, and I gingerly went back to work. But I kept an eye open for that spider.  I was sure he was going to come back for some kind of revenge for destroying his home.

And now the spider lurking in my room looks like this to me: 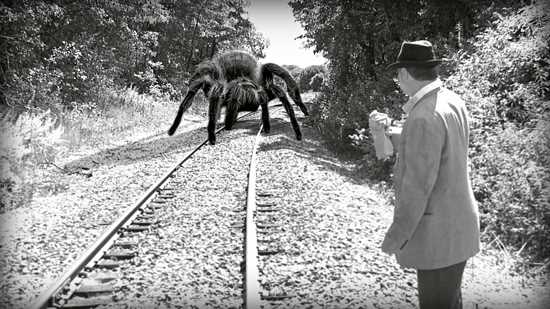 … is it illegal to send your senior citizen mother in to tackle an atomic spider?

Win App review – a little something to block out the gawd awful noise
Icon for White Noise Machine Win 10 app White Noise…
← Heartbreak on Tomato Ridge – more tales from my balcony garden
We use cookies to ensure that we give you the best experience on our website. If you continue to use this site we will assume that you are happy with it.OkNoRead more