Every once in awhile I see an app that puzzles me. Avast antivirus app for Windows 10 is one. It doesn’t really do anything except … well … nothing.  After writing the first draft of this review, I realised my real frustration stems from the fact I expected so much more from the company. They offer great antivirus protection and that isn’t reflected in their offering.

Avast vastly over estimates peoples’ ability to understand how antivirus programs work and assumed everyone would get that the offering is not protection of any sort. They are overly optimistic that people would carefully read their store page.  The unwary out there have mistakenly believed they’ve installed antivirus protection. The way the store page is setup is unintentionally vague. The app never says “This is NOT antivirus protection”. Turns out a surprising number of people don’t really get how things like antivirus programs work. Throw in the new concept of apps for Windows and you have a mix ready for misunderstandings.  So as a result, the app is being installed as a replacement for the actual program.

After talking to a few customers, I had to disabuse them of the notion they had downloaded a new antivirus program so they’ll be safe.  These aren’t dumb people by any stretch of the imagination. They see them tools, nothing more. Their eyes glaze over when I’m explaining the ins and outs of protection. This, coupled with the ambiguous store page, has led to confusion about the apps purpose.

The Avast app is simply an advertising platform for their products … which brings me to another complaint.  It offers no functionality beyond a half hearted blog, tucked way down way down on the app. So vague product information, a blog that’s hidden away like some embarrassing relative and no real information, all of which has created a half-hearted app.

If I were designing Avast’s app I’d rework it this way:

Avast had so many opportunities to sell their product and educate the public but they’ve missed the boat. Instead they offer up a sad little app.

Oh … one last thought:  I’d also add a splash of colour to offset and compliment their orange branding.  It’s very difficult to read the white on orange and it’s a bit overwhelming. 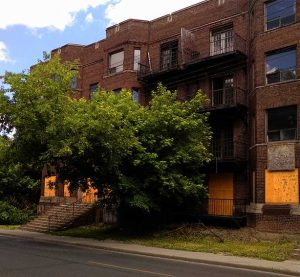 1929 apartment building in Toronto – abandoned & unloved
I was trotting along Spadina Rd, north of St. Clair…
← App Reviews – defining the good, the bad and the downright unuseable
We use cookies to ensure that we give you the best experience on our website. If you continue to use this site we will assume that you are happy with it.Ok