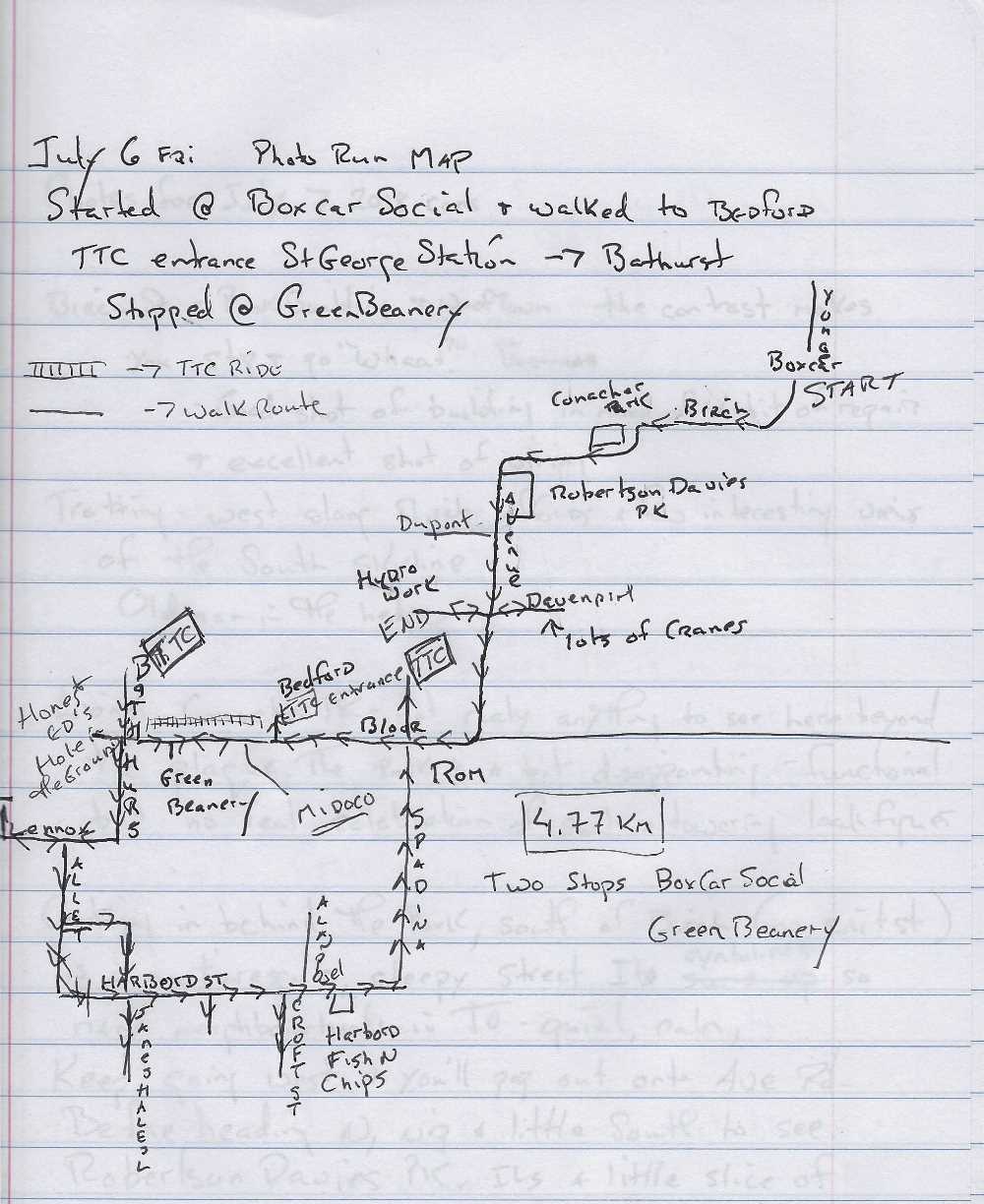 Arggh! I hate when I lose my writing rhythm.  If I stray from a schedule I start to think “oh I’ll do it tomorrow” and before you know it, tomorrow has turned into a week or more. On the positive side, I’ve been working quite diligently on the Mapping Toronto Project. I have the first route all mapped and I’ve done most of the walk.  This coming week, I’ll trot along the path with a timer and take the photos I’ve decided need adding and I’ll be ready to post. Just a handful more to parse and I think you’ll like the walk. It’s a nice leisure look at the Yonge / St Clair neigbourhood.

So what else have I done, besides throwing my back out and whining like a little child for week? Once I was able to move without whimpering I decided to do an epic walk that cut through a few neighbourhoods. Well, it was an accident actually. I was supposed to meet a friend for a pint, but they had to work so I consoled myself with an espresso at the Boxcar Social. Enjoyed the drink, stretched and thought, beautiful day, why not walk the last  knots out of my back and see test a few areas.  The walk exploded from there. This is the result: 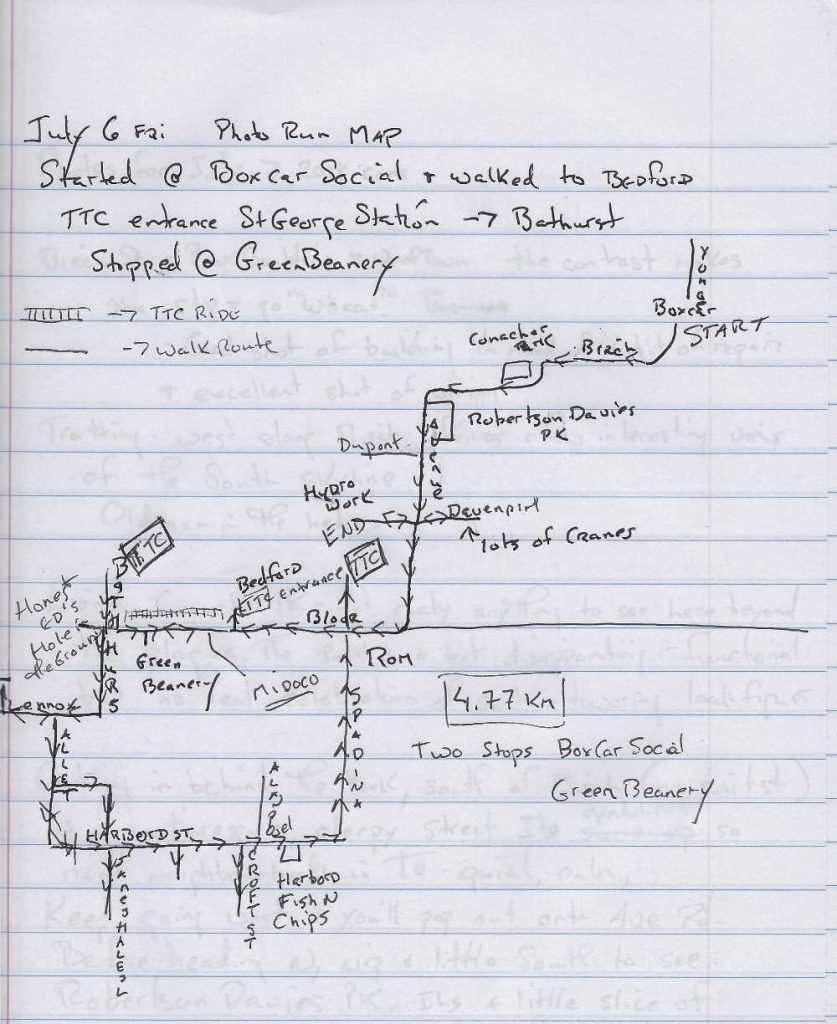 Obviously it’s not to scale, but I’m pleased that it makes sense. It got a wee bit squeezed in the bottom part but still readable. My maps are usually a bizarre mess that displays my inability to tell left from right / north from west.  I’m perpetually lost.  I have mapping software, but I enjoy sitting with pen and paper sketching out routes I walk and inserting little notes. They jog my memory when I’m parked in front of the keyboard, writing about the day. I have scribbly bits of paper all over the place, some that make no sense even to me, detailing photos I’ve taken, routes, places that need return visits, questions about neighbourhoods  etc. Yesterday I stopped at Midoco on Bloor to grab a new notebook. They have the best selection, but I opted for a plain flexible hard covered lined book, instead of the sleek ‘n lovely offerings that made my heart go pity pat. Function won, alas.

Notebooks are essential to keep track of my meanderings. I often joke I am incapable of walking a straight line and equally incapable of remembering where many photos were taken. When I’m walking, I usually have my camera at the ready and simply follow where the lens leads me. This results in some torturous lines.

For those of you that are peering at the map and going “wtf?” here’s the route:

Boxcar Social café on Yonge near Summerhill TTC. GOOD ESPRESSO. Worth the stop
South on Yonge to Birch St
East on Birch to Lionel Conacher Park
South onto Gange Ave and follow along the loop to Avenue Rd with a stop to listen to the train rumble by
South on Avenue Rd to Robertson Davies Park with stops to admire construction sites
Continue south on Avenue to Davenport
West on Davenport to watch the Toronto Hydro crew work
East on Davenport to watch the big crane install
Back to Avenue Road and south to Bloor St with stops to watch more construction sites
West on Bloor to Bedford Rd, playing “Tourist Dodge’em”
Decide it’s time to eat so hop a subway car at St. George TTC station on Bedford go west to Bathurst
Exit Bathurst TTC go south to Bloor
East on Bloor to Midoco to ogle the art supplies, fawn over the pens and pencils & fondle the notebooks
West on Bloor to the Green Beanery for latte and refried bean tortilla
West to corner of Bloor and Bathurst to look at the big hole that used to be Honest Ed’s
South on Bathurst to Lennox
West on Lennox to Markham to look at the derelict Victorian buildings, reminding self to look up what the developer plans are for them
Backtrack and head east on Lennox to the alleyway beside the Randolph Centre for Arts
South on the alley to look at all the graffiti and artwork
Exit onto Hendrick St and go east to Bathurst
South on Bathurst to Harbord St
East on Harbord St
Stop at James Hale Ln to admire murals
East on Harbord  stopping occasionally to look at graffiti and art scattered along the route while heading towards Spadina St
Stop at Harbord Fish and Chips building and wonder if they are as good as they used to when I lived closer to the area
North on Spadina to Bloor, realising there is no space left on the card for more photos
West on Bloor to Cobbs Bakery to pick up buns
East on Bloor to Spadina
North on Spadina to the TTC station and head home.

This is a typical route when I wander off. I enjoy just walking and seeing the city as a tourist, which is what I think the Mapping Toronto Project will showcase – being a tourist in my own city.  Each neigbourhood is different, with something fun to offer. Yesterday, with that thought firmly in mind, I filled the camera card for the first time. If I keep this up, I’ll have to purchase a second as backup. There was so much art work, architecture and more to enjoy, I couldn’t stop taking photos.  Most aren’t worth keeping, but I have them marked for a return visit (or two or three) to try a different angle, maybe a rainy day shot to improve the scene or wait until it’s busier/quieter.  I’ve archived a handful as a reminder to come back when I have a better lens.  But I think I found my groove at last and I’m eager to get the Mapping Toronto Project officially underway. Look for it in about a week.

← Harbourfront visit - all my ducks in a row ... and a goose and gull too. PT 1 - I sacrificed my espresso on the altar of Left Field's oatmeal ale → 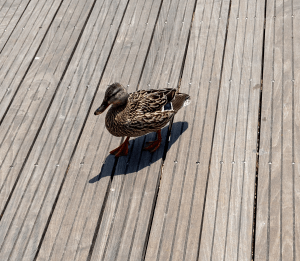 Harbourfront visit – all my ducks in a row … and a goose and gull too.
The original title was going to be Harbourfront Expedition part…
← Tweaking the horizontal hold again
We use cookies to ensure that we give you the best experience on our website. If you continue to use this site we will assume that you are happy with it.OkNoRead more