Contents hide
1. Computer curiosities from the past
2. One foray into the past dredged up this:
3. Note the ripping speed of 10 mbps.

I was helping a customer clean out their “box ‘o useless parts” aka computer curiosities a couple of weeks ago. Every customer has one, you know, that box of computer manuals, cables, electrical devices that have no identifiable purpose. They “have no idea what they belong to but keep just because well … one day I might need it”.

Computer curiosities from the past

I always enjoy this, it’s like a little blast from the past. Occasionally I find a  treasure, usually it’s a mountain of obsolete computer parts. I can count on at least 2 parallel printer cables, various pin to USB adapters, mice, keyboards, old PDAs that died grisly deaths (often involving a toilet for some reason), 5 ¼ floppies, Windows 3.1 disks, and old printer ribbons.

Once in a while someone drags out a zip drive or even better a dot matrix printer. On one memorable day someone revealed a beautiful Underwood 1930s typewriter. It was gorgeous! A wonderful piece of technology. Not exactly an electronic component, but hey, it’s a precursor relic as far as I’m concerned – that invaluable archeological evidence of the evolution of word processing. We found a home for the typewriter and it’s proudly on display in someone’s house. The 1920s and 30s typewriters were works of art and deserve to be preserved. If you have an old one kicking around, or are like me and just appreciate them, check out the Typewriter database website.

Sometimes I’m staggered by the sheer amount of stuff shoved into a closet. It happens when a customer is downsizing and moving to a smaller place. Out comes everything – and I mean everything. Years ago, I found an old Coleco Adam computer along with a number of games and cassettes. We sold it for a damned good price. I was surprised to find how many collectors are out there – the unit was pristine and had the manuals, box and all sorts of extras. The customer drove home with cash jingling in her pocket and a grin. I don’t think she ever told her son how much she made. She simply said “I warned him I was getting rid of everything, his loss” That’s rare, usually everything heads to recycling, which is a bit heart breaking.

One foray into the past dredged up this:

Ah yes, dial-up days. I don’t get nostalgic for them.

Whoa check this out!

Note the ripping speed of 10 mbps.

I remember installing many GVC cards, including this particular one. It made me laugh. I can’t remember which company, but one butchered the manual translation so badly, I kept it for years. The schematics were backwards. This may not be much of a problem for some people, but I have a real problem with left/right and get easily confused. It can be so bad, I sometimes put tags on my screen telling me which is the left and which is right. That particular card had pin settings you had to set, of so, yea, it was a pain.

While taking this photo, my memory flashed onto the 14.4 bps modem I bought decades ago – for a short while I had the fastest dial up in the neighbourhood. I could download a megs worth of data faster than anyone else. And no kids, we didn’t stream video. That was a sci fi notion.

I look forward to the next Cabinet of Curiosities. 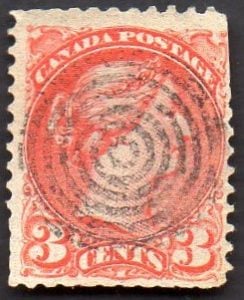 Queen Victoria – small queens
Not in a pithy mood lately so I'll just share…
← Bing Maps – all grown up
We use cookies to ensure that we give you the best experience on our website. If you continue to use this site we will assume that you are happy with it.Ok