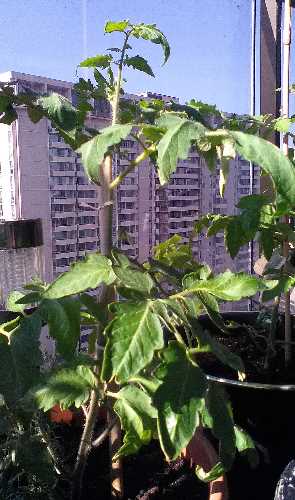 During my daily garden check Saturday afternoon, I spotted a few aphids lurking on the morning glory.  For some reason, I found their mere presence an affront.  After last year’s pepper plant infestation debacle, I plotted and planned my little balcony garden layout with a ruthlessness that was sure to frighten off any invaders.  I posted herb guards around each pepper and went so far as to form a chive moat around one of the larger pepper plants. “HA … get through those defenses”. Who knew aphids liked morning glories? I was so obsessed with keeping them off my peppers, it didn’t dawn on me, the squishy pests would latch onto something else.

With embarassing glee, I flicked the few aphids I found, off the balcony and thought “Got ‘em”. Well … sometime during the night an entire battalion of aphids parachuted onto our 20th floor balcony and infested the entire plant. How could I go from a couple of aphids to a full blown invasion in 12 hrs? The plant was swarmed. I stomped up and down the balcony for a full 5 minutes berating the enemy…

TO ARMS … or more precisely a soapy insecticide bath.  Mom and I took to the battle field armed with our soapy water and covered the plant.  Whenever we ran fingers over a leaf, dozens of dying insects rolled off. For someone who hates getting her fingers dirty, this was particularly disturbing – little bugs by the handful …   clean, soapy bugs … but bugs nonetheless.

I just did another check this afternoon and must admit to a malicious happiness in seeing nothing but dead bugs. And the peppers are completely untouched.  We’ll have to keep a close on the garden, and tomorrow, we’ll give it another bath just in case. There’s bound to be a few of the little white vampires hiding somewhere.

The tomatoes are coming along nicely.  I’m soon going to have to get larger stakes, they’ve already outgrown the ones I used.  They’ve begun to grow rapidly, after a very slow start.

I had despaired over the cucumbers, convinced they had all given up, but last week they had a sudden burst of energy and are growing at an astonishing rate. Finger crossed, we may actually have a few. But the nasturtiums are going to out-do everything this year: 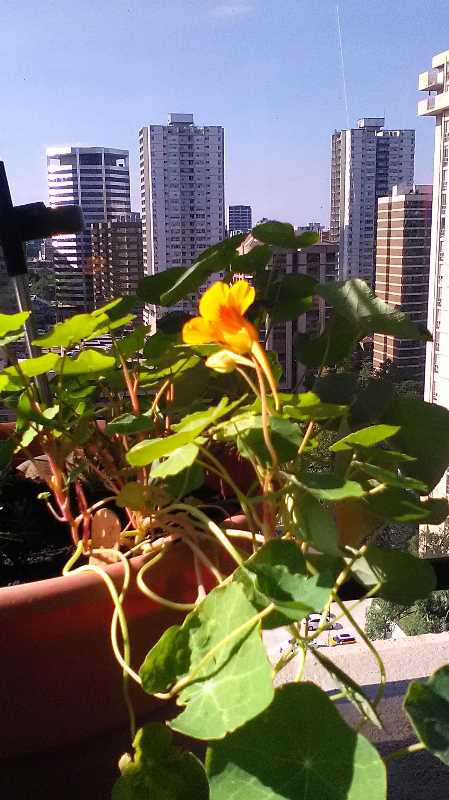 I’ll grab a better shot later in the week. This one doesn’t do justice to their size, but I liked the colours. I’ll keep you posted on any further movement on the bug front.

Lillies in bloom – testing the Acer Liquid phone camera
I took my new cell phone out for a bit…
← More fun with Cortana – 50 Shades of Hell
We use cookies to ensure that we give you the best experience on our website. If you continue to use this site we will assume that you are happy with it.OkNoRead more