I’m sure my friends are a little tired of hearing me mutter about the artwork in the Union TTC station. I’ve been nattering on for months now. I’m not a person who thinks art should be all fluffy lambs and pretty scenery – art can and should challenge. I like gamboling livestock, don’t get me wrong, but I really enjoy art that offers me something new each time I see it. There is a lot of modern Canadian art I’ve grown to deeply appreciate. Which brings me to the title of this photo essay: “Dreariest artwork in the city”. When the TTC renovated the Union stations, they did a great job. Big, bright, roomy. And then they slapped up some of the most depressing images on the platform:

It’s an endless row of depressing, dark and oppressive images that stretch along the length of the platform:

It doesn’t end, stretching from one end to the other. I call the one above “The Leering Man”.

I feel utterly hopeless when I look at them … not really the imagery you want on a subway platform. A bit further up from where I was standing is an appalling set that includes people with horribly distorted fingers, a mother figure who looks utterly wretched and hopeless with a child picking it’s nose.

I’ve actually overheard someone say to meet them on the platform near the kid with his finger up his nose. It’s that bad.

Holy Hanna TTC, throw us a bone, offer something that doesn’t make me feel like flinging myself into oblivion. Maybe even a fluffy lamb or two? Something? Anything but what’s down there. 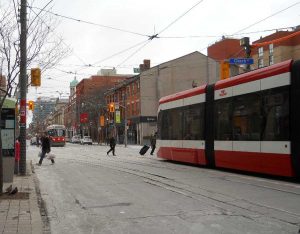