I’m an inveterate collector of all things airmail – maps, stamps, tags, ettiquettes, covers, pamphlets detailing the routes and even stocks for the complanies themselves. I used to focus solely on Canadian airmail until someone gave me a set of lovely Mexican airmails from the 1930s. I looked up a map of the mail routes and was hooked all over again – I had to have more. So, my modest little collection of Canadian airmails exploded into two hefty binders and a number of books on international airmail routes.

While scouring through the Canadian Archives one day, I came across a 1940 map laying out the various routes in Canada. It includes the remote northern routes that relied heavily on the bush pilots for delivery. A lot of the small northern routes used to be served by private arilines like Cherry Red and Patricia Airways, but by 1940, they had pretty much all disappeared, with the routes being folded into Canada Post. 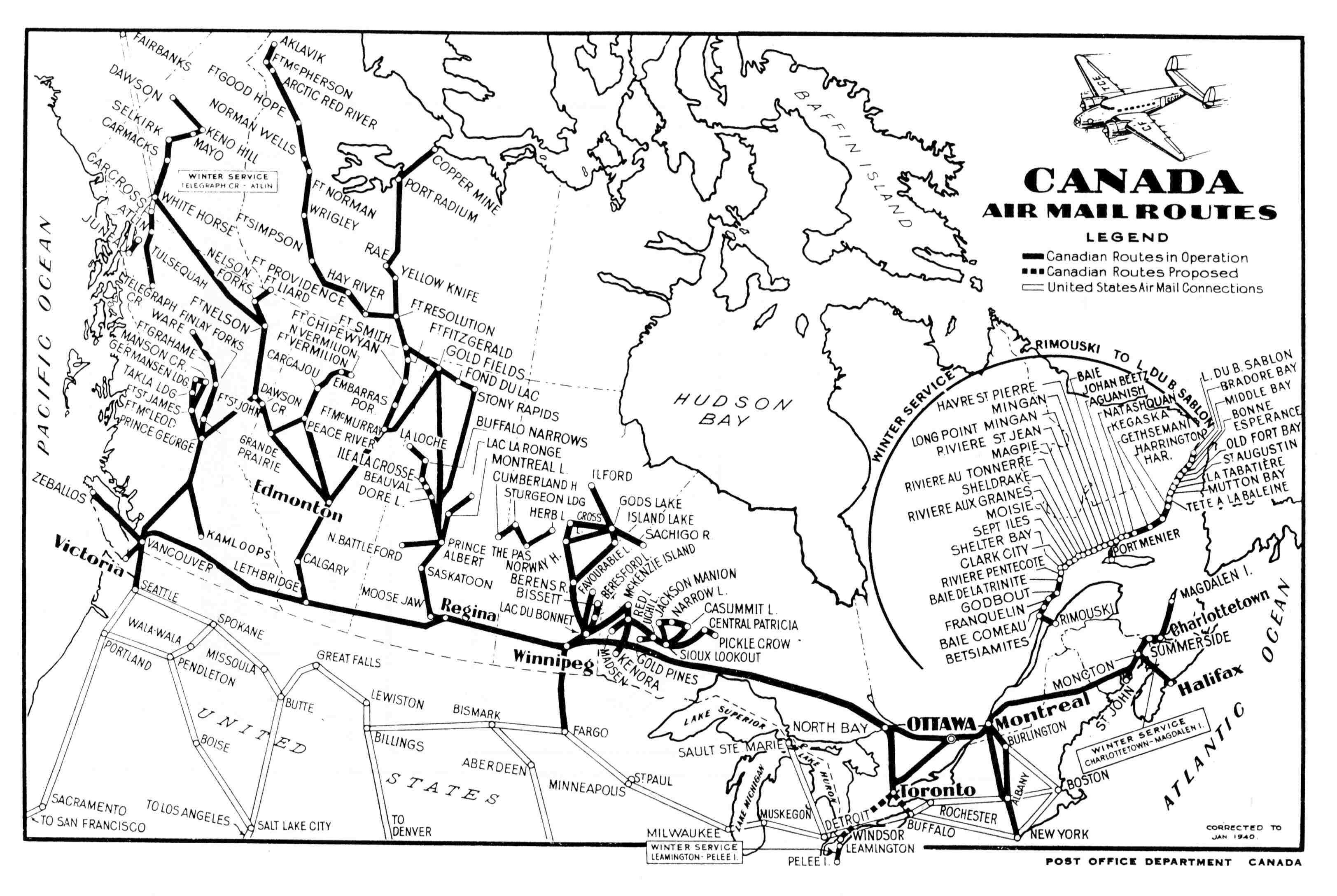 The first airmail flight in Canada took place  June 24th 1918 on a flight between Montreal and Toronto. Captain Brian Peck, of the Royal Airforce, flew the first route in a JN-4 Curtiss two-seater airplane. He was posted at Leaside Airfield during WW1 and the flight was part publicity stunt by the Aerial League of the British Empire to encourage enlistment and show off, what they believed was the future of transportation and part a bit of fun between friends who thought it would be great to have mail delivered by air. The Post Office got wind of the flight and arranged for official mail to be carried to test the feasibility of more such flights. 120 letters were loaded onto the biplane.  At 10:12 am, Captain Peck, with his mechanc Corporal C.W. Mathers, took off from Montreal. After refueling stops in Kingston and Deseranto, the airplane successfully landed in Toronto, at 4:55 pm.  The flight was deemed a smashing success, with the Post Office planning future flights.

From such modest beginnings, grew the complex map above. The remote routes were run by bush pilots who charged a modest fee to carry the mail north. Many of them issued their own stamps – semi-officials – that were supposed to be placed on the back of the envelope.  You can find many with the stamps smacked on the front, right beside the official stamps. These routes and stamps were sanctioned by the post office, and are now very collectable. Even collectors on a modest budget can find some semi-postals for a reasonable price. However, the prime covers, with clean cancels go for a premium.

The airlines that carried the mail struggled to make a living. One crash or the lose of government contracts could spell the doom for a service that owned just one aircraft. By the 1930s most of the air services had folded or been absorbed by larger companies or government services. Canada Post took over most of the routes or contracted pilots running regular routes to deliver the mail (without the eternally cool private airmail stamps).

I have some maps of the various bush pilot routes, so I’ll dredge them out of my archives and post them on a future date. In the meantime, enjoy the map above. To see the map in full glory, right click on it and download it to your computer. It’s quite large and detailed, so enjoy

Previous post
Review – Epson Expression Small in One Printers
Went printer shopping last week to replace my tired and…
← Canada – 1859 5c beaver stamp
We use cookies to ensure that we give you the best experience on our website. If you continue to use this site we will assume that you are happy with it.OkNoRead more