I don’t own any of the very first French airmail stamps. They are a wee bit out of my price range.   The first 2 airmail stamps were issued June 25, 1927, and are lovely little overprints. They weren’t issued to the general public, but were sold at the International Aviation Exhibition held in Marsailles in ’27. Attendees could buy one set each. They currently sell for about $150 to $200 Cdn each, depending on the auction. I’ve seen excellent used copies go for more at a couple of auctions in the last year.  They had excellent cancels that made them very attractive.

The next two airmail stamps issued June 28, 1928.  Catalogue # C3 and C4 weren’t designed for airmail, and weren’t even used in France.  These two particular stamps were regular 1920s Louis Pasteur/Marcelin Berthelot stamps, with a surcharge overprinted on them. They were used by the French consul-general in New York City. Letters were carried aboard the SS Ille de France and sailed across the Atlantic. When the ship was about 200 miles off the coast of France, they were “catapulted” to France. The ship had been fitted out with a seaplane catapult that was launched   when the ship was still about 200 miles from the coast, allowing the mail to reach Paris long before the ship docked.  Catpult mail is a popular area for collectors, and was used by many countries, but you have to be braced to spend some serious cash for the best copies.

A cover from that flight go for huge sums – thousands of dollars. A single stamp sells for $1,500 for the C3 and over $6,000 for C4. Covers exist, but are very scarce and go for a far more. I’ve seen a mint C3 come up on Ebay for $1,000 US, but I’d avoid buying them without a certificate verifying it’s authenticity.  Stamp forgeries are so common, it’s hard to avoid being dinged occassionally.

Now, the stamps readily available for those of us on a far stingier budget start with the 1930-31 issues. For just a few dollars you can have decent copies for your collection. Even better, you can find covers for reasonable prices. 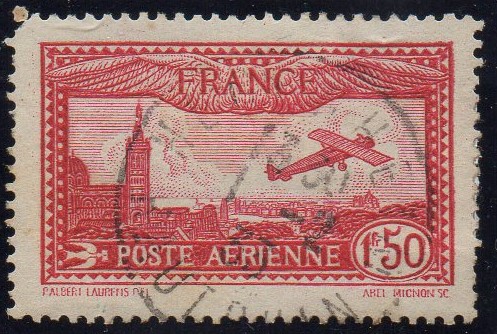 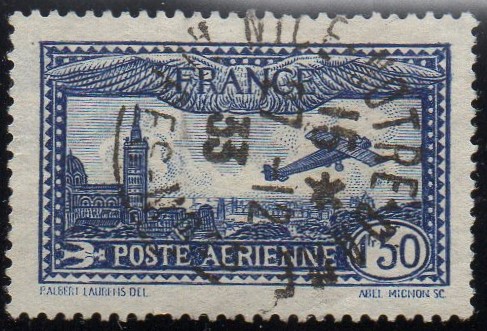 This set sold at the International Air Post show in Paris, Nov 6-20 1930. They initially sold as part of the entrance fee – the face value of the stamp + 5f before being released to the general public. The scene on the stamp is the Church of Notre Dame in Marseille.

C5, used can be found for a dollar or two. A mint copy goes for about $20. If you aren’t fussy about centering, you can find them for much less. C6 (the blue one) sells for slightly less. You can always find copies to buy.  C6 was also issued with E.I.P.A.30 peforated onto the stamp (C6b). These are hard to find and sell for about $700 for a mint unhinged copy.  Hinged will be half the amount and a decent used for around $200 – $300. This is a stamp that is forged a lot. I suspect the majority out there are fakes. If you ever get tempted to lay out cash for one, get it authenticated.

The best part about this modest little pair is the wide variety of cancels you can find.  For the real cancel hound, they can be exciting to explore.

Photo resizing for Surface – Fotor
Windows 8.1's built in photo editing app allows the user…
← Early Canadian Airmail Routes
We use cookies to ensure that we give you the best experience on our website. If you continue to use this site we will assume that you are happy with it.OkNoRead more