Well, I had my first selfie stick encounter today. Selfie sticks are one of those things I read about with wry amusement and slight disbelief. It’s one of those wtf items that are a bit mystifying. I was walking down near St. Lawrence Market just after lunch and stopped to watch this woman walking towards me. I couldn’t figure out if she was trying to commit suicide by walking into traffic or falling headlong onto the concrete. She held this idiotic (yes dears, you do look rather stupid), sticks in front of her as she walked. She was so absorbed in what she was doing, she was oblivious to everything around her … including street curbs, crumbly sidewalks and people minding their own business.

I admit I watched her like a scientist does a peculiar lab  specimen. What she was doing didn’t immediately register with me. The entire scene was so inane.  And in one thunderbolt moment I thought “Selfie Stick … oh oh oh she’s gonna die”. Thankfully that was when one of her friends pulled her away from the road before selfie hit fender.

I don’t understand this craze for taking a gazillion photos of one’s self. It seems so … hmm … so indulgent and self obsessed. I understand a couple when you’re with your friends doing something, but to walk around taking endless photos of yourself. Let’s just say, it strikes me as a boring photo album.

Now.. I have to confess to taking one selfie, about 12 years ago. I was wandering around Hadrian’s Wall. Ok, ok, I was lost and couldn’t find damn Wall. I remember leaving a great little spot called Haltwhistle and striking out across some fields. Lots and lots of fields … and sheep.  Lots and lots of sheep. Sheep everywhere. Big sheep! I didn’t know they grew that big. It’s a bit embarrassing to say you lost a big fucking wall that stretches across an entire country, but I did. I was soooo lost. Finally I found a sign and I remember standing by it thinking “I’m going to take a photo of myself under this sign. That way, when they find my bones and camera, strewn among the sheep, they’ll at least know what I looked like”.

I finally found the Wall. It was the BIG thing in the distance. Kind of hard to miss. I still have the photo too. I keep it on my computer and pop it open occasionally when I feel rather stupid. It makes me feel better. Nothing can be as dumb as the day I misplaced Hadrian’s wall. That is my one and only selfie. 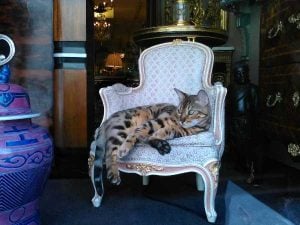 A chair fit for a cat god
Walking home a few days ago and saw this regal…
← Who knew Diana Krall was this talented
We use cookies to ensure that we give you the best experience on our website. If you continue to use this site we will assume that you are happy with it.Ok