Further offerings from the National Film Board of Canada

I’ve been poking about the NFB archives again and stumbled across a great film featuring Leonard Maltin’s favourite pics from the NFB. He pays a nice tribute to the innovative annimation the NFB funded starting with a Norman McLaren film. McLaren is one of those underappreciated pioneers of the NFB animation division.  I watched Hen Hop when I was in high school – it was a revelation. Not all animation looked like mass market Saturday morning cartoons. Image that.  Animation was also about pushing artistic boundries, exploring ideas and yes having fun.  I’ve loved McLaren ever since.

Last  spring, Montreal ran a 100th anniversary celebration of McLaren. Montréal’s Quartier des Spectacles presented McLaren Wall-to-Wall featuring much of his work in a big, bold format and the NFB has much of his work online, free to watch.

This film is @95 min, and shows some of the best animation form the NFB – including a great one by McLaren and Oscar Peterson (film score). If you don’t have time, click on the link, book mark the page and go back later. 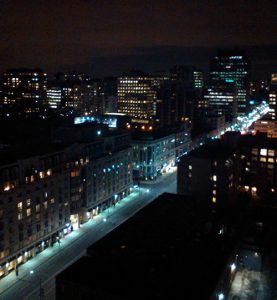 Toronto – north skyline view with film grain effects
PHOTOGRAPHY - NIGHT SETTING W/ FILM GRAIN & DRY BRUSH…
← Flipboard joins Bitter Grounds
We use cookies to ensure that we give you the best experience on our website. If you continue to use this site we will assume that you are happy with it.OkNoRead more