I acquired an impressive German FDC recently, courtesy of a fellow collector in Germany. He posted a message on a stamp collecting forum about a special Deutsche Post commemorative cancel honouring the Canadian army. He kindly sent 3 covers/postcards that had the cancel. What I didn’t expect was the FDC displayed below. It has 3 elements that make it one of the more attractive FDCs I’ve seen in years. 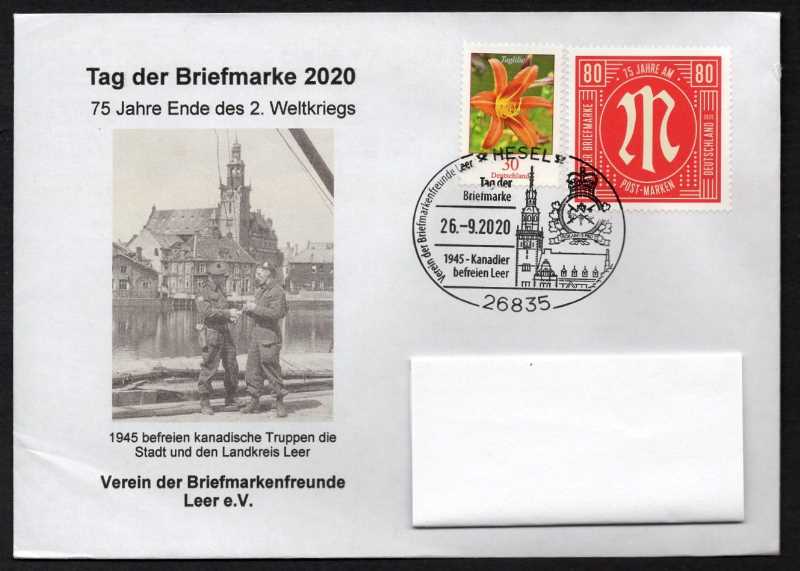 2 Canadian soldiers in front of the Rathaus (townhall) in Leer, Germany

Deutsche post issued the First Day Cover (FDC) with a special cancel commemorating both the 75th anniversary of the end of World War II and Canada’s role in liberating Leer, Germany. The cancel displays both the Leer Rathaus and the Canadian army badge. It’s a touching design. 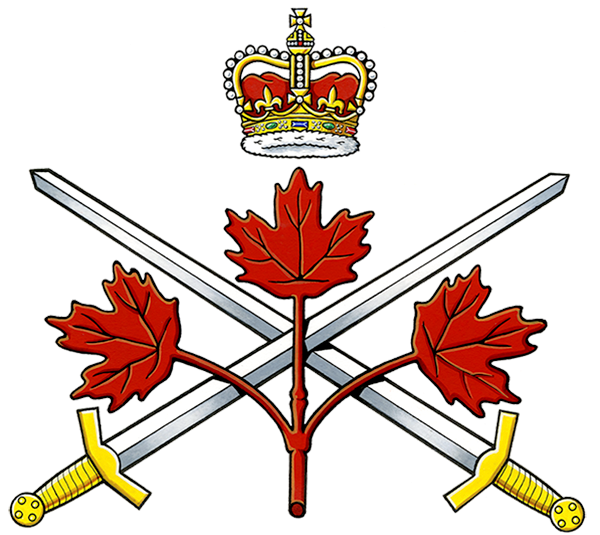 Emblem of the Canadian army

It took some detective work to find details about both the cancel and the photo used on the FDC. I started with a (very) rough translation from the German FDC.

Leer is in the Northwest of Germany, across the river from Groningen province, Netherlands. When Canadian troops swept across the northern parts of Europe, they crossed the bridge from Groningen to Leer and liberated the city.

The cancel was created for the annual German-Dutch exchange day. Apologies for the following bad translation from the original German.

The traditional German-Dutch Exchange Day 2020 will take place on 26 September in Hesel.

The hall, which philatelists know from the Northwest German Collectors Exchange, held in 2019, is large enough, with an area of around 600 square metres, to allow all visitors to maintain the necessary safety distance.

Exchange and day of the stamp.
The village community house in Jemgum, (Germany) on the other hand, measures only 300 square meters. Therefore, the event had to move from Jemgum to Hesel. On September 26, from 8 a.m. to 2 p.m., the Leer stamp society will not only be inviting you to the Big Exchange Day, but also to the release of a cover, which this year is dedicated to the 75th anniversary of the liberation of the city by Canadian troops.

An “Experience Stamps” team will be there with the new “75 years of AM Post” stamp as well. The association will have available the cover containing both an historic photo and the AM stamp.

Closeup of the special cancel 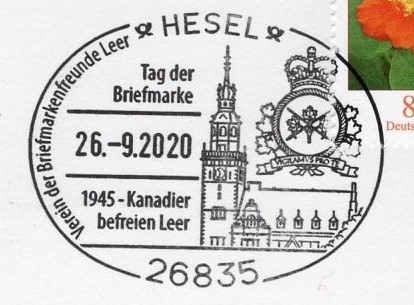 Excellent cancel showing the badge of the Canadian army

AM – Allied Military stamp on the German FDC

There was a pleasant surprise on the FDC – the commemorative AM stamp. It has been released for the upcoming 75-year anniversary of the original AM (Allied Military) post war stamps. AM stamps were issued after the fall of the Nazis, under the US and Great Britain forces. These general issues were in use from Feb. 1946 to June of 1948. 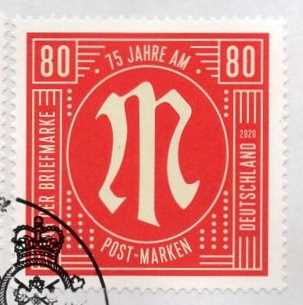 The originals are an interesting grouping to collect. Aside from the basic set, avid collectors can hunt for varieties in colours, types of paper, cancels, perforations, and plate numbers. They are mostly inexpensive and easy to find.

The Allies had set up a temporary postal service in the occupied German Reich, which could also be used for civil mail from March 1945. The “AM-POST” stamps (“Allied Military”) were the first stamps of the Allies on German soil at that time. They initially came from the USA (MiNr.: 1-9), later they were printed in England (MiNr.: 10-15) and Germany (MiNr.: 16-35). – Duetsche Post website 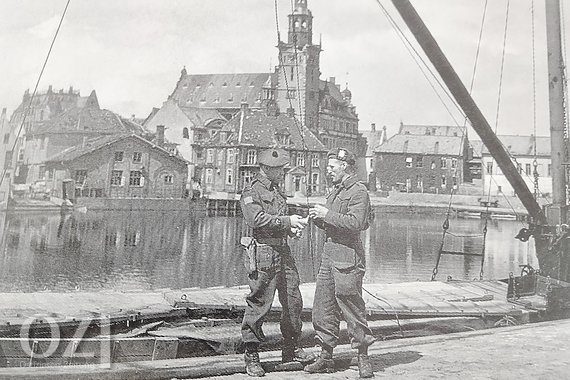 Two Canadian soldiers stand in the city’s harbour after the conquest. Images: Dieter Simon, The End of the War 1945 in Leer, Verlag Schuster 1995

It was difficult to find any reference to the photo used in this German FDC. I found only one in an online newspaper from Germany. Beyond this one link, I couldn’t find anything else. I searched Canadian archives too, but nothing popped up.

This is a good find for any Canadian militaria collector as well as stamp fans, both German and Canadian. 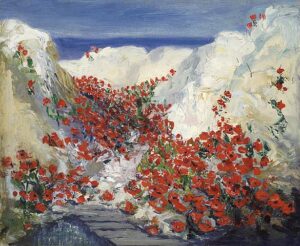