I have a plan involving a map, a Presto Card & a camera

I have a plan and it centres around this map:

That is a map of Toronto neighbourhoods – some indistinguishable from others, many unique. I’m going to hop on and off the TTC (public transit here in Toronto) with my mighty Presto Card pass and photograph each neighbour. Toronto changes rapidly, buildings that are here to day may be gone next time you walk by. But it’s more than the structures – the streets in each neighbourhood are unique and I want to document them.

Oh my, I’m feeling ambitious. Maybe too ambitious because there are 140 neighbourhoods here and getting to some of them by public transit is a major pain in the ass. I’m committing my self to trying.

I’ve trotted through quite a few areas in my travels around the city and only recently started to think of how to turn my meanderings into an exciting, long term project. The idea came to me when I was walking through Little Portugal about 2 weeks ago.  What a treasure of old buildings, street activity and history.  A few days later, I was around Wychwood, looking at old buildings, cafes and wall art. There is so much to photograph in this city. Until now, I’ve been photographing in a bit of a helter-skelter fashion – if I’m in the area, I take photos. Too often I’m without the camera and I think “That’d would be a great shot”. I also find myself going back to the same places repeatedly, which will become boring in a very short while. I need a project – a big job that will force me to take different types of photos.

If I were a linear kind of person, I’d start at #1 and work my way through. That just boring. I’ll throw the numbers into a bag, pull one out and explore. I’m going to start with my own neighbourhood – Yonge and St. Clair. I’ve been casing spots to set up a tripod and have found about 5 excellent areas that offer opportunities.

Am I over ambitious? Oh absolutely. Will I manage to do it? Not a clue. But it’ll be fun trying. As I said, this is a long-term project. Not something I can whip through in a few weeks or months. I’ll return to some areas multiple times because the neighbourhood is historic and chocked full of great street scenes and architecture. Or maybe because the shots weren’t good enough and I need to try again. Some photos will be set aside to turn into artwork, others will be posted on Instagram and Patreon as teasers.

You may have read in previous posts, I’m gearing up to buy myself a DSLR and tripod. I’ll use the new equipment to kick off the “Mapping Toronto” project. After talking to someone down at Henry’s Camera store (everyone wave to Bryce) I came home and evaluated what I wanted equipment wise. Turns out, it’s quite modest.

Henry’s has a couple of good bundles that tweaked my attention and I’ll get one of them.

That’s it. That’s all I need to start with. I’m going back down to pick Bryce’s brains later because I want to know if I can adapt my old Konica 40mm film lens and I have a few new questions. Not sure if it’s practical, but it might bring about some interesting results.  Doesn’t hurt to ask.

I’ll eventually save for a nifty 50 50mm Canon lens that would be fun for street scenes, but that is NOT essential. It’s a toy. Bryce suggested I look at Prime lenses if I became serious about photographing architecture.  They are intriguing to say the least.

Black Friday sales are coming soon, so I’ll be patient and wait to see if the package I want goes on sale.  If not, I’ll take a deep breath and just plunge in.

If you want to follow this project, bookmark this site or pick your favourite social media site over there -> and follow me. You can support Mapping Toronto by clicking the donation links to the right. 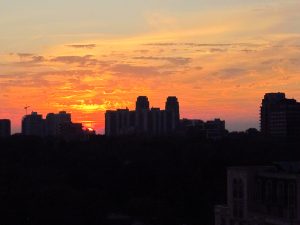 When the sky looks like liquid fire – dusk skyline
Fussing around with my camera during the heatwave earlier this…
← Do I see mammoth burgers buried under that ice?
We use cookies to ensure that we give you the best experience on our website. If you continue to use this site we will assume that you are happy with it.Ok