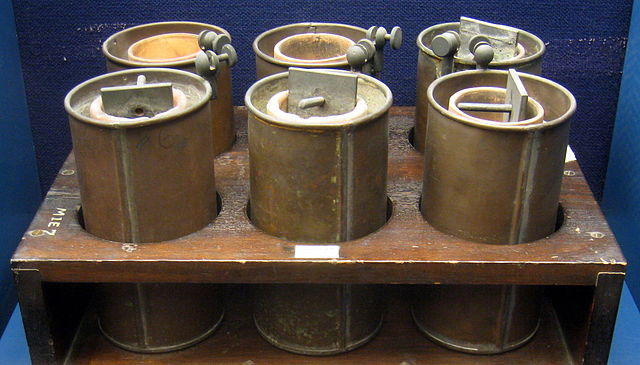 In honour of Exploding Battery Week – the Daniell Battery

Every time you fire up your phone, stop and offer thanks to English chemist and all-around polymath, John Frederick Daniell (1790–1845), inventor of the Daniell Battery. He’s the dapper fellow to the in the picture below. No, he didn’t design the first battery, he was second, but his design has been described as the first practical battery. Alessandro Volta (volt … volta … get it?) developed the first battery. 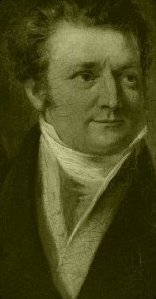 Daniell was a typical 19th century intellectual – a busy, active mind that wasn’t constrained by one discipline – chemistry, physics, meteorological, climatology and a little bit of geology thrown in.  He started his career working at a sugar works where he developed a technique for clarifying sugar.  He later went on to patent his idea. I tried to find the patent but had no luck. Anyone want to fund a trip to the UK archives? I think I could spend a lifetime there looking at patents.

Anyway, while working at the sugar plant, he attended lectures at the Great Windmill Street Anatomical School in London.  It was there that his interest in chemistry was encouraged.  He sat in on lectures by William Thomas Brande, chemist, author of the Manual of Chemistry and later professor at the Royal Institute. The Great Windmill had a powerful influence on Daniell’s passion for chemistry. While there, he formed a lasting friendship with both Brande and Michael Faraday – a name that should ring a bell or two with most of you. 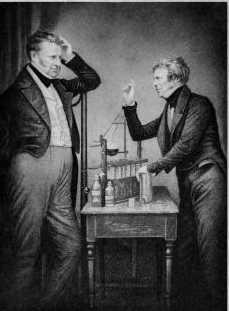 By 1830, Danielle had established a name for himself in the fields of chemistry and meteorology.  His work and influential friends (Samuel Taylor Coleridge among them) helped Daniell obtain the position of first professor of chemistry with the new King’s College London where he could devote all his efforts to science and not on the mundane matter of working to support family. While at King’s College, Danielle worked on advancing Volta’s battery, developing a battery that would be named the Daniell Cell.

So just what was the Daniell Cell? Let’s see if I can get this right the first time. The Daniell Cell was pretty much a copper pot stuffed with a copper sulfate solution. That pot was put into another pot made of earthenware rather than metal. It in turn was filled with sulfuric acid. A zinc electrode was put into the mix to create a reaction. By building on the works of both Volta and Faraday, Daniell created a battery that produced an electric current that was stable and eliminated the pesky and dangerous hydrogen bubble problem that formed with Volta’s model.

Photo of an early Danielle Battery 1836

And here’s another one: 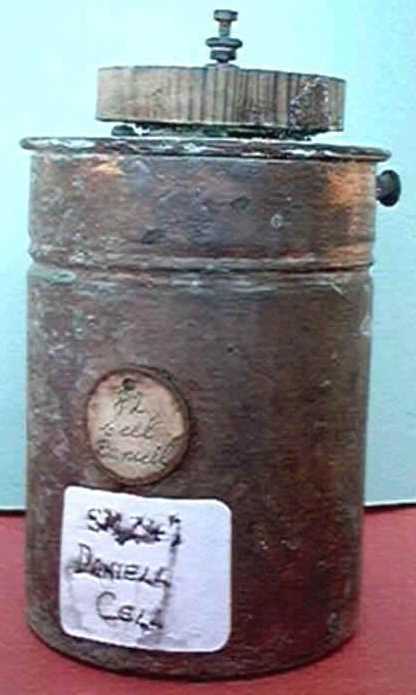 Photo of an early Daniell Battery 1836 courtesy University of Malta

Looks a bit … er … dangerous. Not to mention not very portable, but then that wasn’t a necessity.  I don’t think modern Health & Safety would be impressed.  But here’s the thing, Daniell’s ground-breaking invention fueled a boom in communications.  It was the building block for the expansion of the new telegraphic network that snaked throughout both the UK and US and the new electrical industry until well into the 1870s when newer developments made the Daniell obsolete.  The chemical reaction in the battery sparked the currents that drove the burgeoning communication advancements … all leading 200 years later to your little smart phone.

You can read more on how the Daniell Cell works here: Notes from the Oesper Collections The Daniell Cell William B. Jensen Department of Chemistry, University of Cincinnati, Cincinnati, OH. It opens a pdf you can download and read.

Previous post
Call me when they manage to create real mutant ants
Someone posted this Toronto Star article on their Facebook page…
← Technological marvels – lowly & underappreciated pencil sharpener
We use cookies to ensure that we give you the best experience on our website. If you continue to use this site we will assume that you are happy with it.Ok