I stumbled across an interesting early mail scam while reading through supplements to the Canada Post Guide. I came across a reference to a scam that seemed to plague the postal system to such an extent, the Postmaster felt obliged to issue a directive:

Circulars posted by Clay Burton Vance, Palais Royal, Paris, France, offering to sell horoscopes for $3, have been observed in the mails, and postmasters are instructed to look out for such circulars, which are posted in Paris in square neutral tinted envelopes, and treat them in the same manner as circulars relating to illegal lotteries. Letters are not to be forwarded to the address of Clay Burton Vance, and money orders are not to be made payable to him.

That’s pretty darned specific. I started to wonder who Clay Burton Vance of Paris, France was and what did he do to warrant being singled out by the Canadian Postal authorities.  After digging around a bit I got a pretty clear picture of Mr Vance – he was a scammer of international infamy in a pre-mass communication age.  He used the post office to bilk the unwary for years.

Vance ran his postal scam in the first part of the 20th century and likely raked in a tidy fortune.  I found hundreds of ads that ran year after year,  in papers all around the world. For a mere $3, he would create a personalized horoscope for you, among other services. He drew in his marks with the same ad, promising a free reading and from there, it snowballed into serious money.

The Australians are not amused by the mail scam 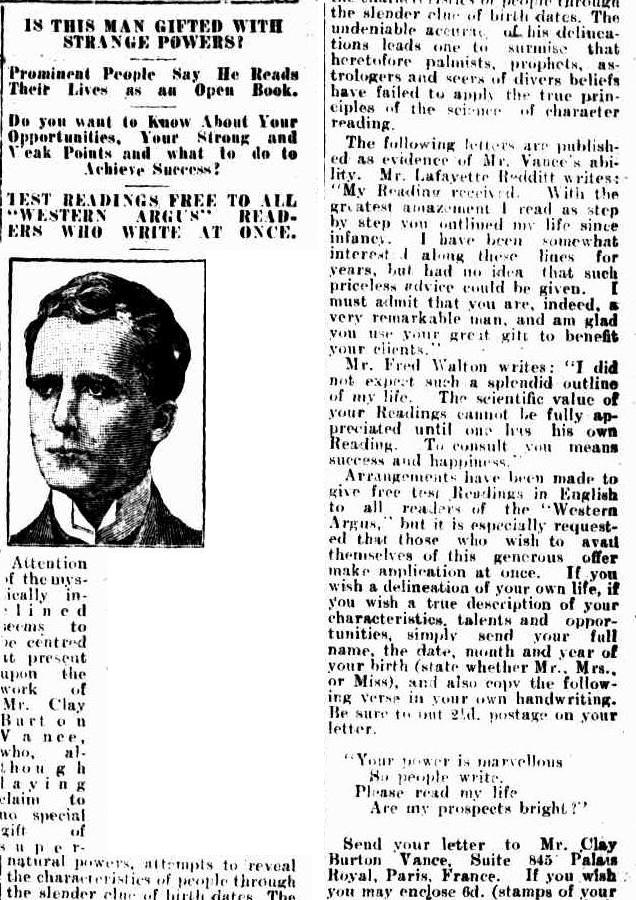 He ran his scams from least from 1911 to 1916, possibly later. How pernicious was Mr. Vance? Prohibitions popped up in other mail services, instructing post masters to return all mail to/from him.

Who was Clay Burton Vance? That’s a good question.  Was he English, French, maybe American? No idea. He left a big footprint, but few clear details.  He was a scammer who would make Nigerian princes envious.  Australian papers began writing articles about his fraud. I loved the big headline screaming out “A Parisian Imposter”. 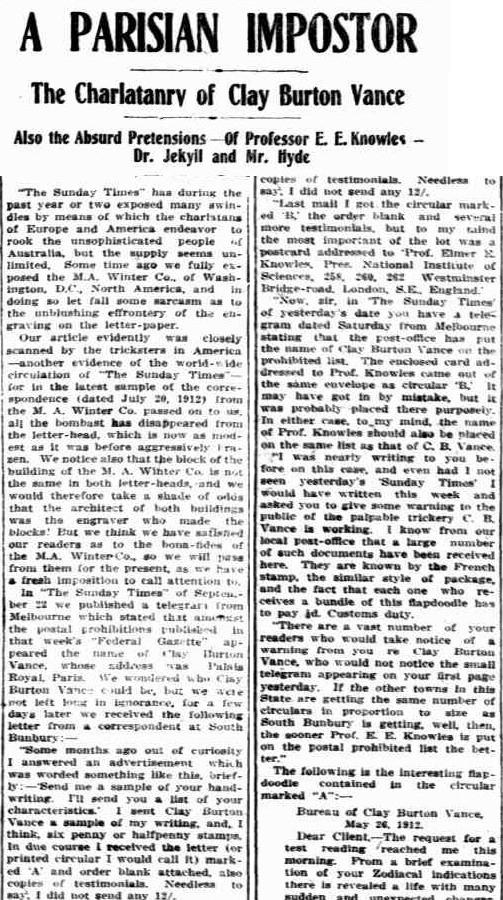 The  scam will be familiar to anyone who’s clicked a link promising something for free only to be hit with a pay wall. Vance did the snail mail version of this. He would offer a free reading or handwriting analysis and, in a classic bait and switch, send off an order form instead of the promised reading.

“…send me a sample of your handwriting. I’ll send you a list of your characteristics”. I sent Clay Burton Vance a sample of my writing, and, I think, six penny or half penny stamps. In due course I received a letter (or printed circular as I would call it) marked ‘A’ and order blank, also copies of testimonials”. Parisian Imposter Sunday Times (Perth, WA : 1902 – 1954), Sunday 6 October 1912, page 1

A year later the Sunday Times ran another article titled Two of a Kind focusing on another scammer who they suspected worked with Vance, (or may have been Vance in my opinion).

How bad does a scammer have to be to warrant a specific mention in Postmaster instructions? Pretty damned bad. The $3 per horoscope would be equivalent of asking for 3 weeks pay. In 1911 the average pay, in Canada, for a labourer was between $1 to $1.50 a week. A skilled job, like civil engineer pulled in $2.55 weekly. (University of BC).

This was serious business. The US Assistant Attorney General filed a suit against Vance in Jan 1916 in an attempt to halt his abuse of the postal system. They went further and forbade post offices around the country from drawing up any money orders to Clay Burton Vance.

you are hereby directed to inform the remitter of any such postal money order that payment thereof has been forbidden, and that the amount thereof will be returned upon the presentation of the original order or a duplicate thereof applied for and obtained under the regulations of the Department  – Post Office Department, Washington Order No. 9420 Jan 29 1916  Case No. 32436-S

US authorities went further in their wrath. They ordered all mail sent to Vance was to be stamped “FRAUDULENT: mail to this address returned by order of the Postmaster General” and returned to sender.  It would be interesting to know if any such covers still exist.

… send your full name, address, the date, month and year of birth (all clearly written ), State whether Mr., Mrs. or Miss, from ad copy in numerous magazines … Correspondence received from Vance

The initial offer was “free”. But as with Australia and Canada, the curious person was soon hit with a fee for the “complete life reading”. What was sent was a vague, nondescript reading: 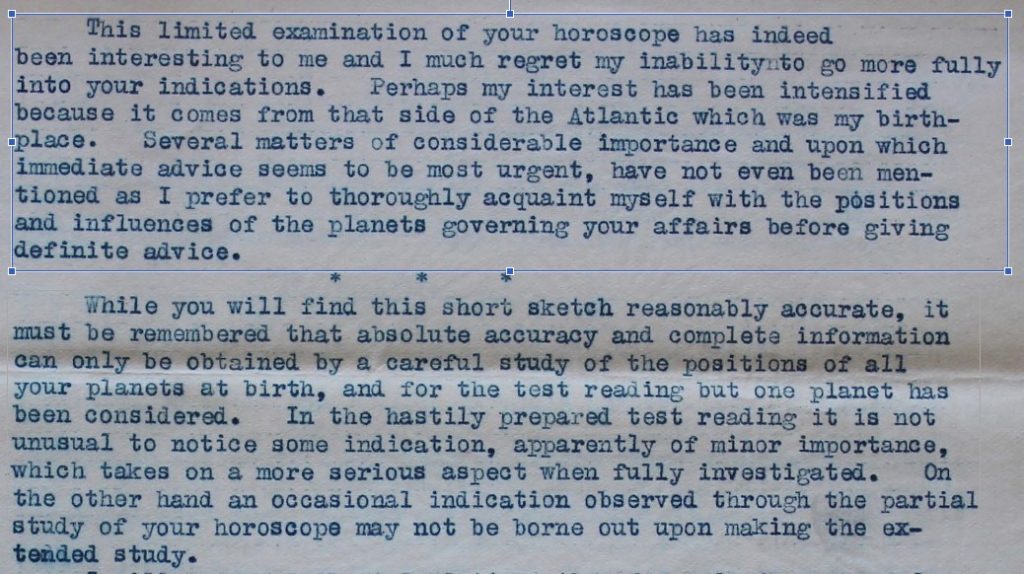 This limited examination of your horoscope has indeed been interesting to me and I much regret my inability into go more fully into your indications. From US Post Office official complaint 1916

Vance would then go on to demand money for the full reading with promises of significant details about the person’s future.

I can assure you that your Complete Life Reading w ill contain information which you would highly prize and I trust you will post your order immediately. From US Post Office official complaint 1916

The post office goes on to explain how the con works: “… [what]Vance does is to send to the remitter one of the forms already made up and printed, according to the sign of the Zodiac under which he alleges the purchaser was born” ( From US Post Office official complaint 1916). In other words, Vance had pre-packaged horoscopes or handwriting analysis that he sent off.

The first request for payment was $3. If the person did not respond, Vance would continue to send requests, slowly dropping the fee to .50c. It’s unclear how many fell for this, but judging from the international response, I’d say Clay Burton Vance was a pretty successful conman.

C. B. Vance of The Hague, Holland incurs the wrath of the US Postal Office

In May of the same year, the Post Office extended the ban to include C. B. Vance No 5 Groenedelstraat, The Hague, Holland for the same mail fraud offences. Looks like things got to hot for Clay Burton Vance of Paris and he set up shop as C.B. Vance of The Hague. I’m sure if a diligent search was made of various archives, this name and address will pop up on fraud lists as well.

I was a bit amused to find Vance also published a book, in Portuguese, Oraculo – A Leitura da Vossa Vida – Revela o Seu Futuro which translates roughly to Oraculo-The reading of your life-reveals your future. It was printed by Livraria Civilização Porto, Portugal. 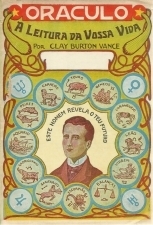 It’s the same photo that shows up in the ads. Makes me wonder if he was Portuguese. It’s highly unlikely he was using his real name. I don’t know if he sold any books, but I’m sure he found willing marks.

A Sampling of Where the Ad Appeared

I gave up after 200 ads and didn’t even get around to non-English speaking papers, but I’m sure he hit them as well. So, who knew – spam predates spam! Mail fraud is as old as the postal system. Modern day email scammers have simply picked up were the snail mail cheats left off.

NOTE: I forgot to bookmark the location of the US Post Office Department’s pdf file on Clay Burton Vance. If you are interested in reading the entire Assist Attorney General file (about 11 pages) leave me a note and I’ll send you a copy. I downloaded the pdf and forgot to save the page location. 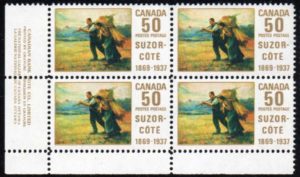