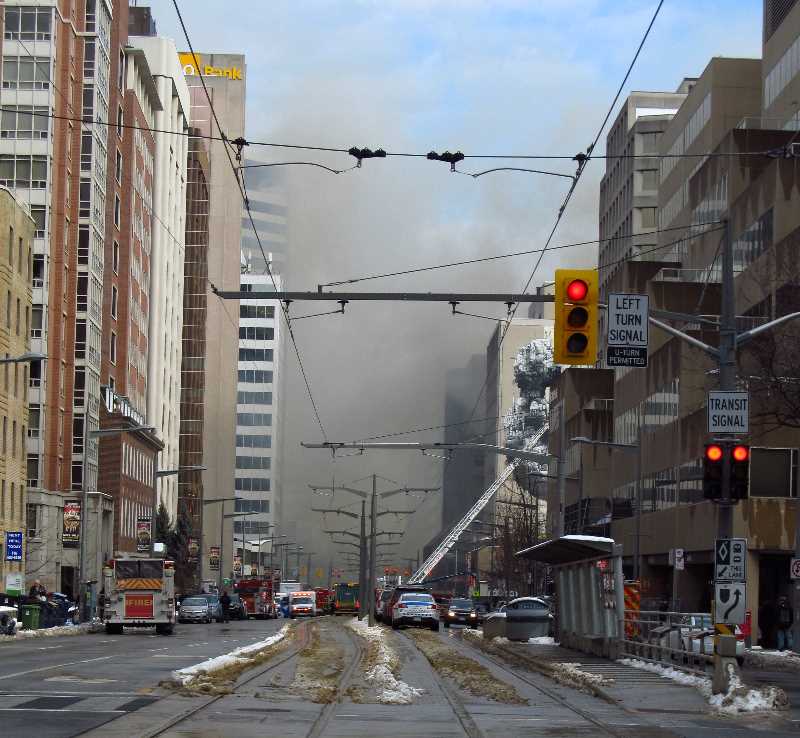 Bit of chaos in the neighbourhood today:

Sitting in my room this morning, feet propped up, reading a trashy book when sirens blared past. Then another, and another and another … they just kept coming. We’re right on a major city artery so it’s not unusual to hear emergency vehicles blasting down the road. After awhile their passing barely registers, they’re just part of the day to day sounds. Even the medivac helicopter that whips down the ravine towards the hospitals rarely merits a comment. Today, it sounded like dozens of emergency vehicles were converging on the neighbourhood, along with an irritating helicopter that kept buzzing around and around.  About 10am I finally wandered out to the balcony to find out what the fuss was. Yup … hell of a fire: 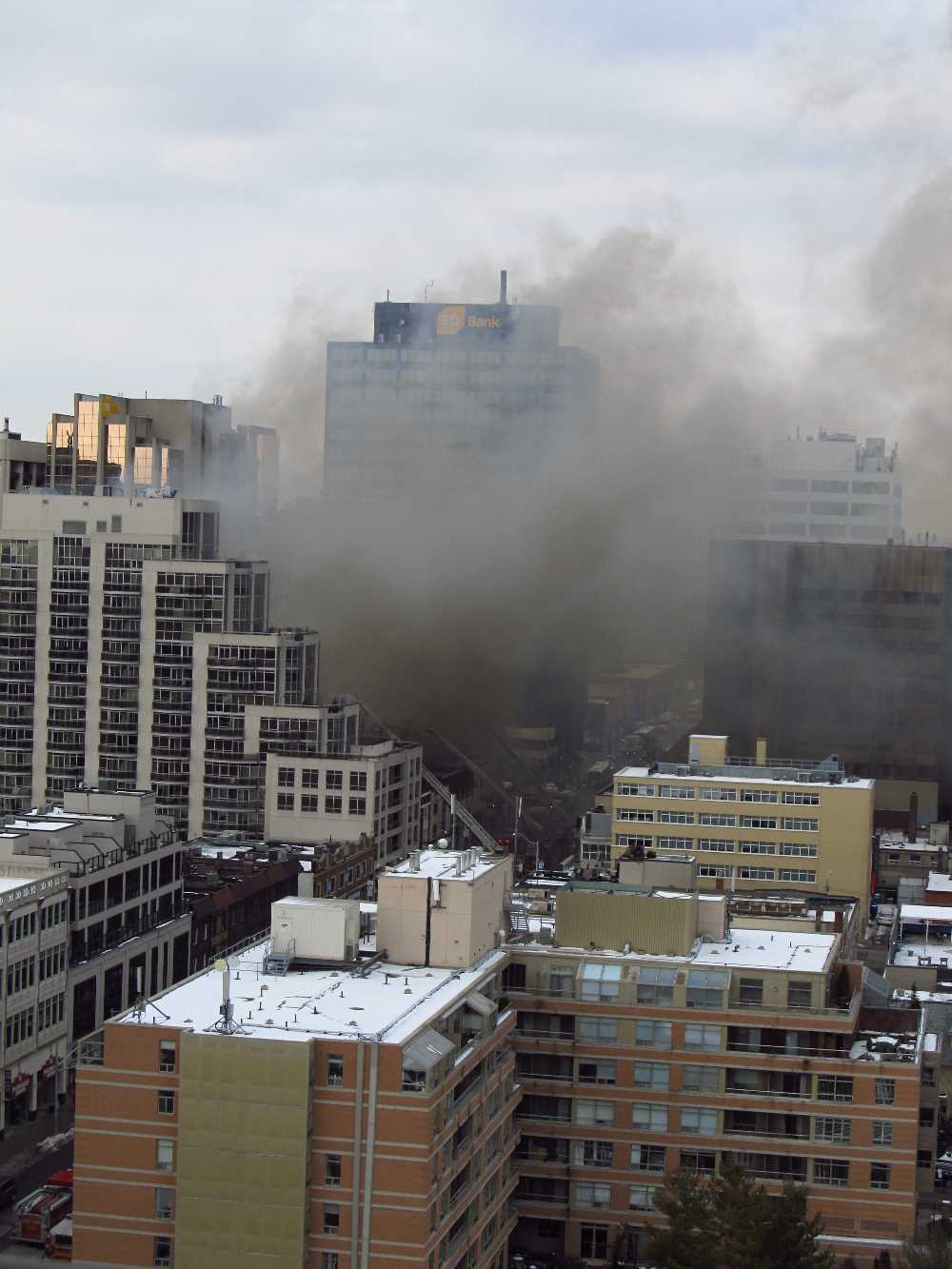 The fire started around 9:30am at the 93 year old Badminton and Racquet Club. By the time fire services arrived, it was already out of control. Doesn’t take long in some of these old buildings. 2 aerial trucks were already deployed when I looked out, more arriving. Eventually 4 aerial trucks, 20+ emergency services vehicles and over 100 fire fighters were battling the blaze. As of 5:30 pm, the aerial trucks were still pouring water onto the building but the smoke was finally dissipating. 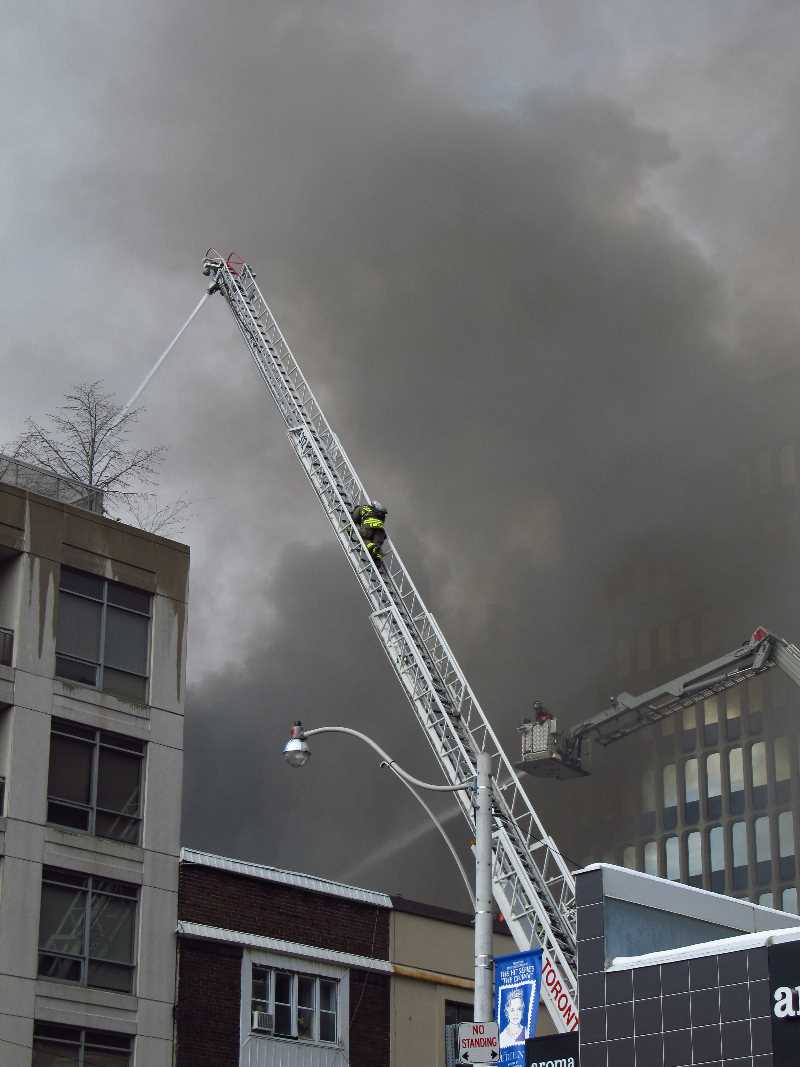 The historic Club is tucked off St. Clair just behind Yonge Street. It’s a peculiar location, if you don’t know it’s there, you’ll go by the driveway without seeing it.  It’s  nestled between a bunch of condos, in a tight slip of land that looks like it was shoe horned in, although it predates all the condos by decades. Not an ideal place to fight a fire. The club was evacuated and so far no reports of injuries, everyone was accounted for. Around noon the roof collapsed and Fire Services focused on preventing the fire from spreading, there wasn’t much they could do to save the club. 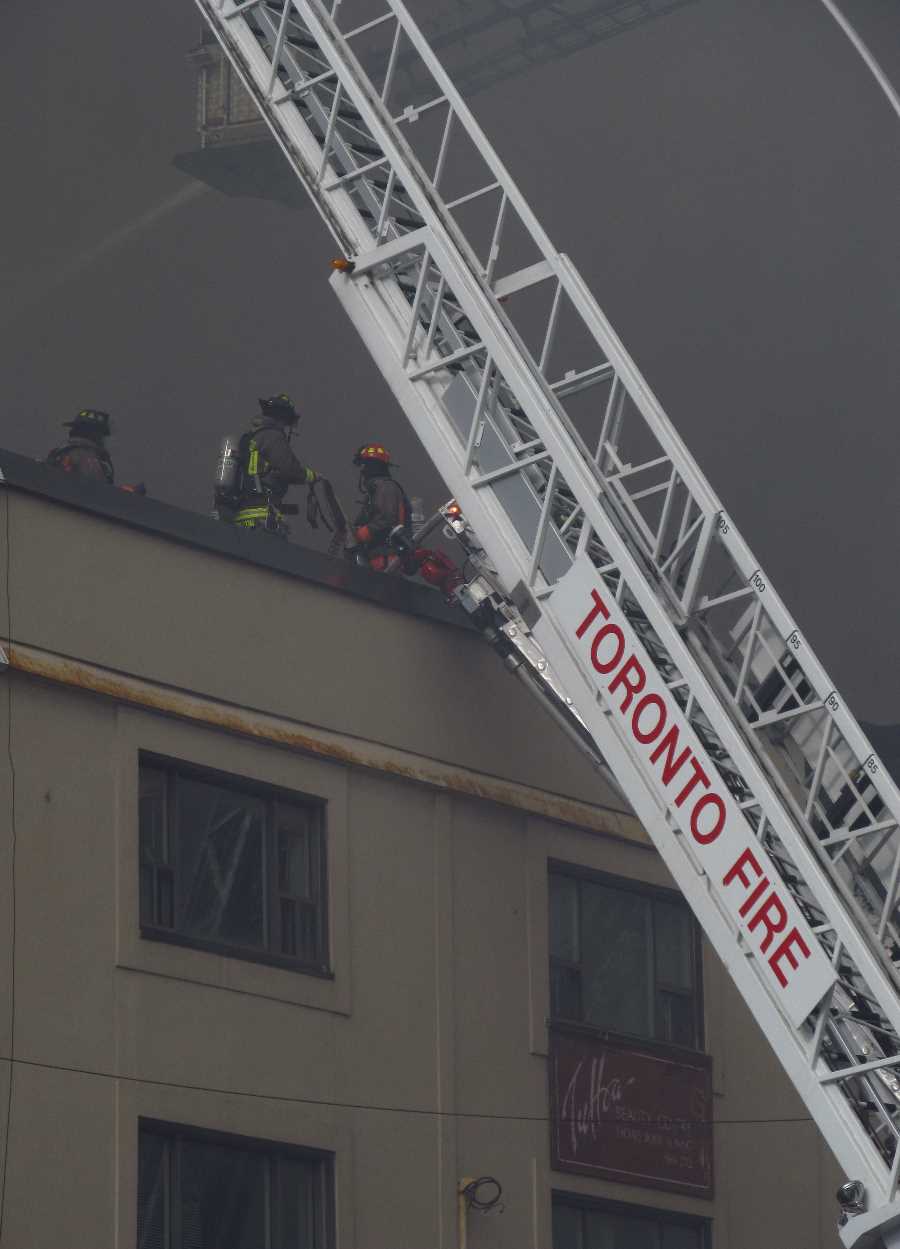 At one point the smoke was so thick, you couldn’t even see the condos/offices across the road: 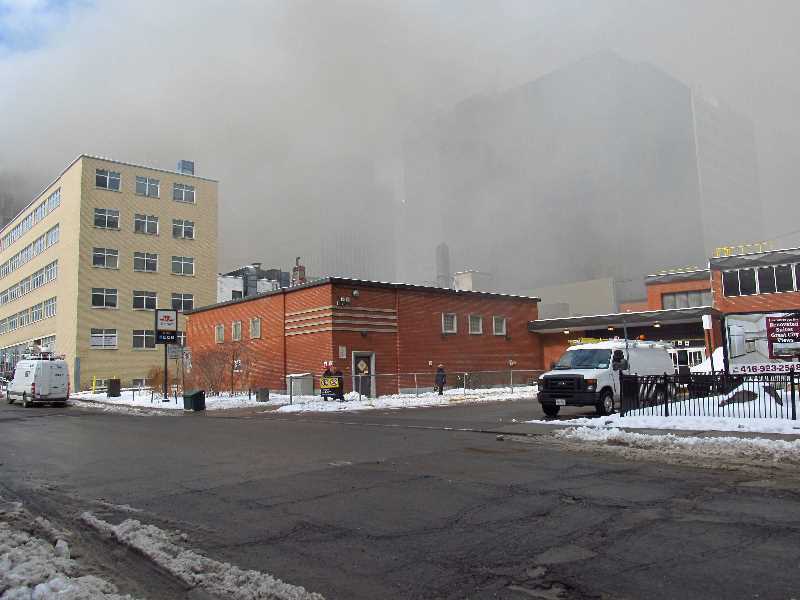 The St. Clair subway station was closed and traffic redirected, creating a hell of a mess for anyone trying to get around. The condo in the picture below, (white stepped building) is one of my favourite buildings in the neighbourhood. It faces onto Yonge St, the Club is directly behind it. I stood watching for a few minutes and the woman beside me sighed and said “that’s my home”. The water and smoke damage will be ferocious. Don’t think much will be salvageable. But, the building didn’t go up in flames, nor did any of the other closely packed condos and businesses. 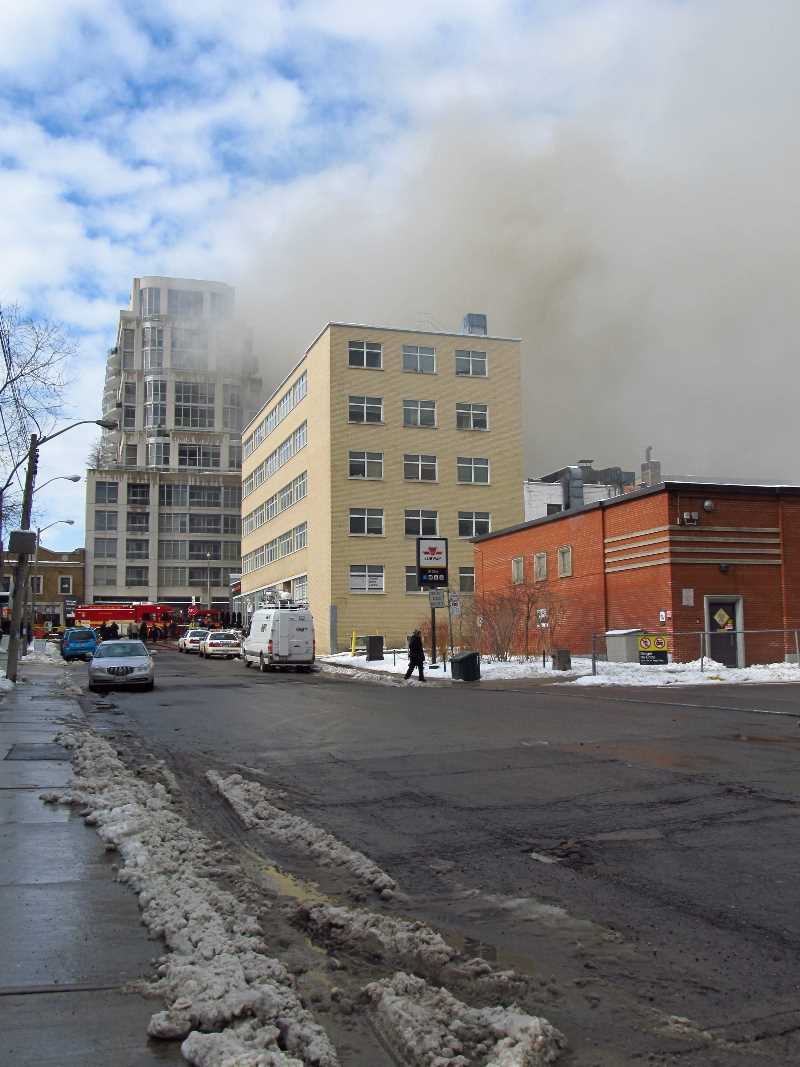 The smoke was blowing north east – heavy, black, ugly smoke. My building is to the south east so we escaped smoke damage. Anything north of Pleasant was swamped with ugly, heavy brown/black smoke. Eventually the St Clair Centre, about a block north east of the fire, was evacuated because of the smoke. It’s going to take a while before the neighbourhood is put back into shape.  Looks like the fire fighters will be there most of the night making sure the fire is completely out. Will be a long night for them. 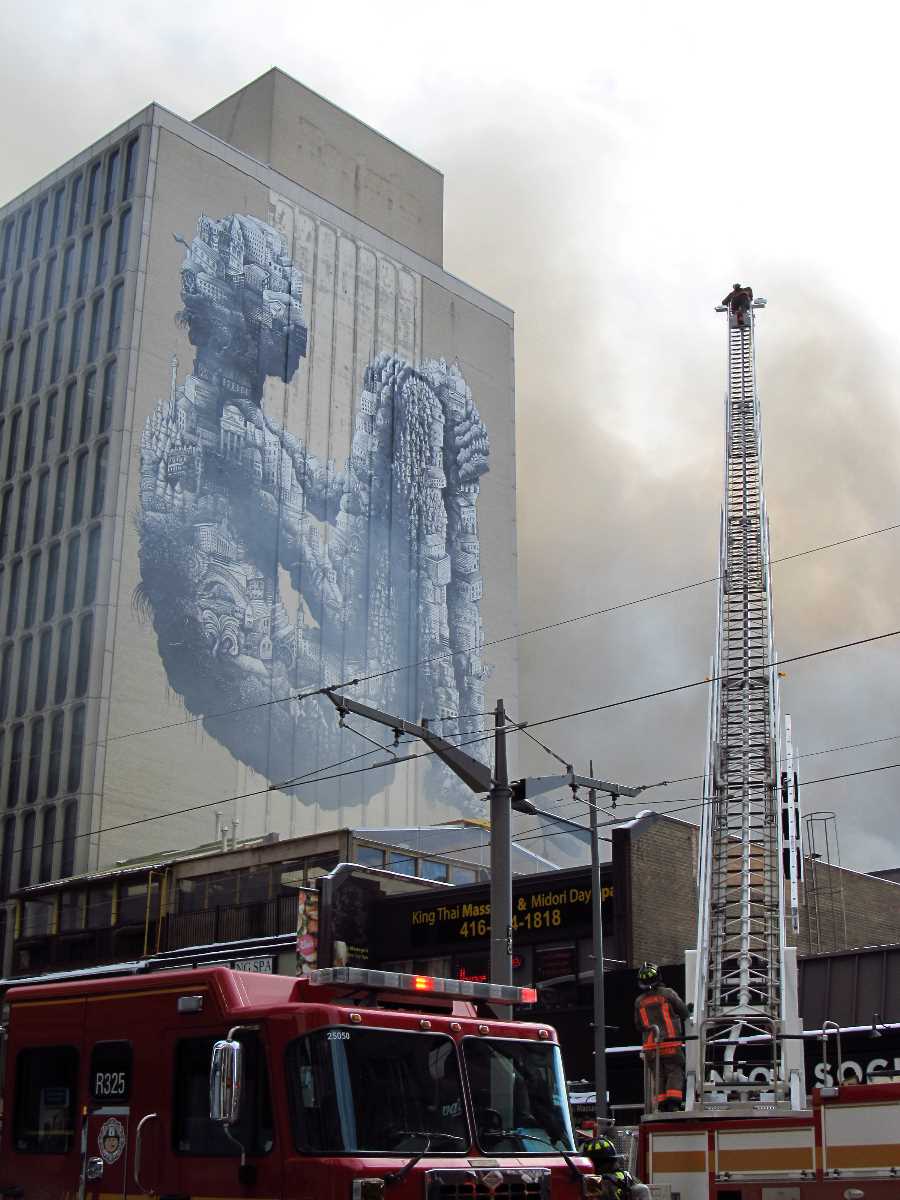 When I look at this photo I think “not a job for amateurs”.  I’m filing this under #respect: 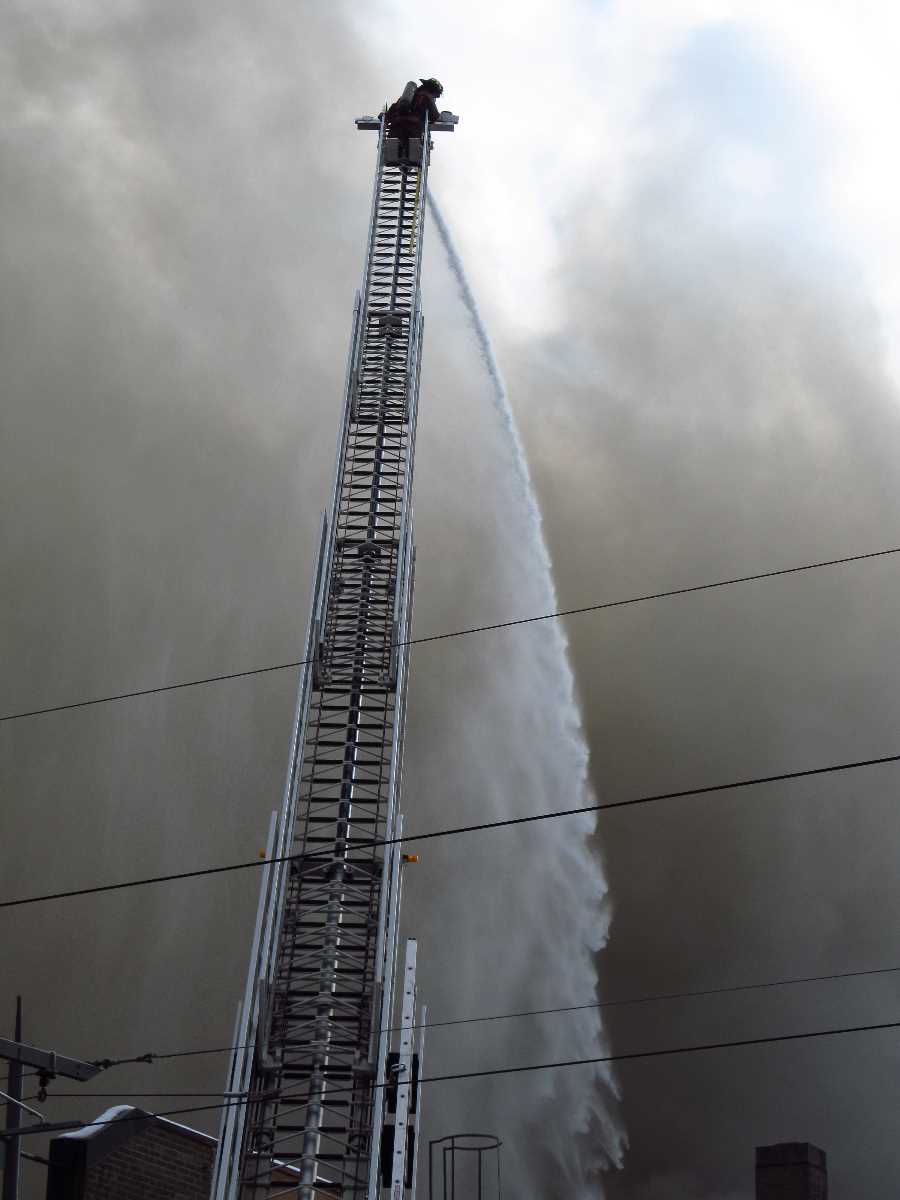 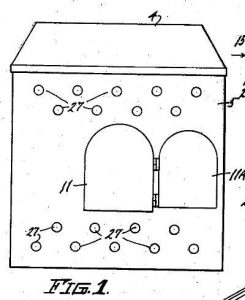 You knew I’d get around to litter boxes eventually
You just knew I was going to get around to…
← Ohhh … Photoshop paint-by-numbers – koi fish repost
We use cookies to ensure that we give you the best experience on our website. If you continue to use this site we will assume that you are happy with it.OkNoRead more