Incredible change in the weather. It’s not sub zero, rainy, cloudy, sleety (is that a word?) blah for a change. Just a beautiful spring day here in Toronto.   In the space of about 2 weeks, we’ve gone from -10 with the wind chill to a balmy, lovely 13 Celsius (that translates to 55 F for my American friends). Lovely jubbly! It’s been a dreary, dreary month. The sunshine is such a break.

The sun and warmth means garden season isn’t long off now. Traditionally it’s the May long weekend – also called the 24 weekend to symbolise the case of beer that will be sacrificed over gardens all over the country. I’ve been rethinking my little balcony garden. We’re up so high, we get tremendous winds so some plants don’t do well. Plus there is a  temp difference, always a bit cooler (especially at night) than on ground level. I wouldn’t have believed it if I hadn’t seen it over the last few years. So we need fairly hearty plants to deal with wind, intense sun in the afternoon and possible chills in the evening.

Last year my peppers were hammered by aphids. I was on the verge of abandoning my peppers, which would break my heart, until I found some plant sites that recommended combining certain plants to discourage aphids. So, I’ll give it a try.

and it’s great for balconies. I’m going to move it against the wall so it gets lots of sun, but protects it more from the wind. Wind became a real issue last year, with the gusts so strong we tied things down. In this planter, I’m going to put the pepper plants along the back, add some chives and oregano between them. Not sure which peppers I can get, some years the pickings are slim. I’m also going to plop in some rosemary again along one end and some thyme (regular and lemon) and nasturtiums in front. I’m going to add a peat mixture to the soil this year. Hopefully it will help prevent the moisture wicking that happens with the wind.

Under the planter, I’m going to line up  basil pots. They’ll get plenty of sun, but have a bit of protection from the wind and direct sun. The sun can be so intense up here, basil tends to die off quickly. I might try some coriander this year and some mint. But, like I said, it really depends on what’s available. Last year was hugely disappointing as far as offerings.

I’ve also picked out a couple of lavender plants, which has done well in the past.  Along the edge we’re going to plant more nasturtiums. Last year they thrived so I’m going to put some with the lavender as well as with the herbs – you can never have too many nasties. Nasturtiums are supposed to be good aphid deterrents. They’ll look great and add a great peppery taste to a salad.

Haven’t picked out tomato plants yet. Looking at a beefsteak variety and hopefully a nice heirloom zebra. Again, it depends on what we can find. Some years the garden centres lack all imagination when it comes to plants. I’m playing with maybe a sunburst zucchini squash. Not sure yet, it might not thrive. But I’ve run across a couple varieties that are supposed to do well in containers.

We’ve had tremendous luck with lettuce varieties as well so we’ll throw one of the mixes in. One summer we had lettuce pretty much for all of august and into Sept.

We’ll need some more ivy – English and German for around the pots. We’ve planted Snapdragons previous years and have been pleased with how they do. Our lilac tree survived the winter and is already showing leaves.  Keeping our fingers crossed that it flowers. We have wildflower seeds as well.   We’re going to devote a large planter just to them and place the planter near the balcony door, so that’s the first thing we see every morning. The bees will enjoy it too. I’ve noticed in the past 2 years, bees making their way up to the 20th floor to hover about our plants, so that makes me happy. 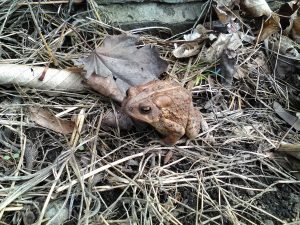 Your week is a true success when you end it by rescuing a #toad
I was up along the nasty stretch of Yonge, just…
← The Theory of Headphone Entanglement
We use cookies to ensure that we give you the best experience on our website. If you continue to use this site we will assume that you are happy with it.OkNoRead more