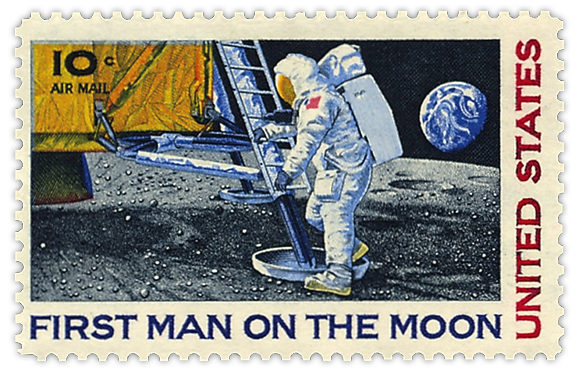 It’s been 50 years since the Apollo Moon landing, and this little stamp captured the world’s excited glimpse of humans stepping out beyond earth. I remember watching this on a black and white tv. As a child, I had the barest awareness that I was watching an important moment in history.

To celebrate this event, USPS issued an airmail stamp (Scotts #C76) in Sept 1969, 2 months after this watershed event. This artistic rendering of the first footstep on the moon is immediately recognisable to everyone.

While that stamp didn’t go to the moon, Apollo 11 did carry something that should pique the interest of any airmail fans  – the first extraterrestrial airmail. The “Flown Apollo 11 covers” are genuine postal covers, complete with stamps, cancels, interesting cachets and serial numbers to identify each.

The 214 covers bore one of 2 different stamps – Scott 1371, the Apollo 8 issue celebrating the first manned flight around the moon or Scott 1338, US flag over the White House – and autographed by the 3 astronauts. The ultimate airmail collectable. Unlike the Apollo 15 unauthorized covers (I’ll write on that at a later date), NASA did know about these and okayed their trip. 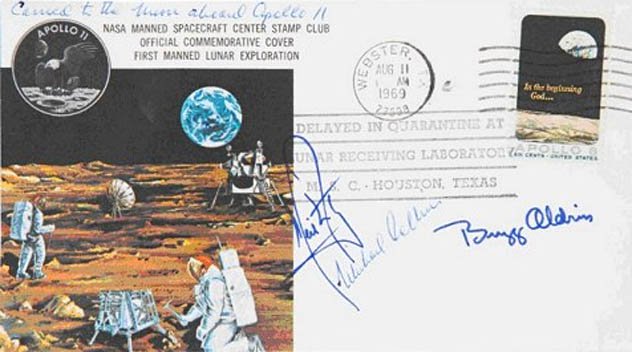 Flown to the Moon postal cover

Three different cachets were used, the one above, Project Apollo 11 displaying the 3 astronaut profiles and the Apollo 11 mission seal.

Each has a stamp that reads “Delayed in Quarantine at Lunar receiving laboratory M.S.C. Houston, Texas”. Like everything else aboard Apollo 11, quarantine was mandatory. The covers have a Webster, Texas Aug 11, 1969 cancel.

The Moon covers also bear a handwritten inscription “Carried to the Moon aboard Apollo 11”. Covers pop up for auction occasionally, but is unusual to see them. According to the website Space Flown Artifacts, Neil Armstrong took 47, Buzz Aldrin 104 and Collins 63. Each used numbering their covers to identify the owner:  N = Neil Armstrong, C = Michael Collins and EEA and A = Buzz Aldrin.

A second set of autographed covers remained on earth, with family members, in case of catastrophic mission failure. These are referred to as “Insurance covers”.

“These covers were currency to our families in the event that we did not return.” Michael Collins r/f Space Flown Artifacts

Undoubtedly these covers would have been worth a fortune had the unthinkable happened. It’s unknown how many exist, but it’s estimated around 1000 were left with the 3 families.  There are a couple of differences between the Moon covers and the insurance covers, including no quarantine markings, no “carried to the moon” hand inscription  and a different location for the signatures.

Where to find auction info

Space Flown Artifacts tracks auctioned covers and their prices. The earliest known auction was 1991 and the cover fetched $13,750. The most expensive cover, to date, sold in Nov 2018 for $156,250. This one was a rare one – it came from the Armstrong Family Collection and had the number N-28. Armstrong held onto all the covers during his life and they never came up for sale or auction until his death. To date, 2 Armstrong covers have been sold – N-28 and N-18. 14 Collins and about 30 Aldrin covers have been put up for auction, with not all selling. If you are a big fan of the Apollo missions, check out Space Flown for updates on the status of covers.

Now that the 50th anniversary has rolled around it’ll be interesting to see what stamps are issued to commemorate the Apollo 11 mission.

Here’s one last image to wind up the article. In 2010, NASA sent up the Lunar Reconnaissance Orbiter which captured stunning images of the Apollo 12, 14 and 17 landing sites. You can even see the footpath left by astronauts along with rover tracks, untouched for decades. Something to think about over your morning coffee.

Interested in space oddities? Check out the article on NASA patent & technical drawing bonanza. I dug around NASA and Google patent pages and found a lot of great tech drawings for space suits, astronaut underwear and control panels.

Can’t get enough photos of the Moon? Check out their page on the Lunar Rec Orbiter here https://www.nasa.gov/mission_pages/LRO/news/apollo-sites.html and NASA’s extensive archives here https://history.nasa.gov/ 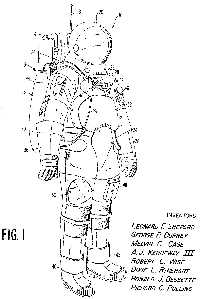 NASA patent & technical drawing bonanza
I’ve been rooting around looking for something interesting to explore…
← 1937 Australia airmail cover to Austria – C3 & C4
We use cookies to ensure that we give you the best experience on our website. If you continue to use this site we will assume that you are happy with it.Ok