I guess I’m supposed to be listing my New Year’s Resolutions for 2017. The thing is … I don’t do the whole “make a promise and break it in record time” commitment shtick. By the way, did you know shtick is in the Word spell check dictionary? I’m impressed. Anyway … I’m sitting here having my usual latte in a slightly new location listening to people blabbering on about their plans for tonight. They have to have that last drink before the year is out, they have to make their resolutions for the New Year, they have to … have to … have to…

Is there something wrong with me that I see tomorrow the same way I see today – Sunday, the day that follows Saturday? Same as it did last week and the week before.  I don’t quite understand the rush to have one last whatever today. (Hopefully) I’ll be around tomorrow to have a drink or whatever floats my boat.

So, after listening to so many around me rattling off their list I’ve decided, shit yea, let’s make a list of promises. And here it is:

2 – “I like the word ‘indolence’ It makes my laziness seem classy” Bernard Williams, philosopher
Stop procrastinating and reset Word defaults so I don’t have to keep adjusting them. Yes, I am that lazy.

3 – “The question of what you want to own is actually the question of how you want to live your life.” ― Marie Kondō, The Life-Changing Magic of Tidying Up: The Japanese Art of Decluttering and Organizing
Throw out the 10 tonnes of crap I’ve accumulated over the years. I’ve been looking at the stuff I own and came to an epiphany over the holidays – I don’t need nor want it. All I want can fit into one small room.

6 – “The test of good manners is to be patient with bad ones.” – Gabirol, The Choice of Pearls.
Be patient when I’m in public. Okay, I blew that one within 30 min of writing it down.  I’m putting an exemption in: I can be snarky & pissy to anyone carting about an SUV sized designer purse, cutting in front of me and swinging the useless piece of shit purse so it hits me on the head … I’m free to retaliate in any fashion I deem appropriate.

7 – “Nice girls don’t swear” Dumbass saying that should be drop kicked into a past century.
Swear less. Another one I blew out the door in record time (see #6). Maybe I should just cut down on a specific swear word. That’s it, I’ll stop using the F word altogether.  This might be a bumpy January.

That’s about it. I think I can manage 4 and 5 quite easily. I already bought two bags of my favourite popcorn so I’m ahead of the game.  It’s a crapshoot as far as the rest.

UPDATE: 7:17pm and I already chewed through #7 and the F word promise. Screw it… 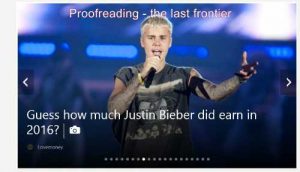 Online editors must think proofreading is a mysterious land
A little something to see out the old year. My…
← Not even for free coffee
We use cookies to ensure that we give you the best experience on our website. If you continue to use this site we will assume that you are happy with it.OkNoRead more