Self portrait? Me and the graffiti

Nice day to wander about with a camera. No rain, for a change.  Was down on Bloor and Bathurst taking a few shots – it’s one of my favourite areas to lurk because it’s always busy. I was standing outside Honest Ed’s (former discount department store, now vacant) looking at all the graffitti that has proliferated. CIties are quirky creatures – they seem to abhore a blank canvas. Leave something long enough and it will be filled.

Some of the graffiti was imaginative; the wall art is spectacular in spots. And then you have the garden variety idiot with a spray can and zero talent. Those are the ones who tag the windows. While standing in front of one of the large windows, I thought the reflection would make a great non-standard selfie. I actually loath selfies for a variety of reasons. I do enjoy self portraits – shots that speak about the neighbourhood and person taking it. When I was standing there looking at the window, graffitti and people striding by, I was struck by how the image captures the empty building. So, I grabbed a couple of shots. When I sat down for a coffee to look over the photos, I ran one through a couple of basic routines – saturation, contrast, increasing shadows yada yada yada and here it is:

Motion Project – Self Portrait of an Urban Scribbler July 07 2017 Bathurst and Bloor, Toronto. Originally meant the scribbler tag to mean me, but after looking at the tagging, it seems to have a double meaning. I’m including it in the Motion Project because it has a kinetic feel to it and fits with what I think of as a city in motion. Kind of cool shot. 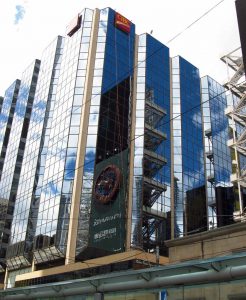