Ok, I tried to like this logo. I really, really tried. I went over it trying to find something positive about Ontario’s contribution to Ontario’s and Canada’s big 150 birthday bash but … wow. Oh wow…. I …. sigh.

I’m not being critical for the sake of being critical. I have some serious issues with the basics in this design. First and foremost is it’s legibility to older eyes. The Ont. gov said it was looking for a design to appeal to millenials. Fine. Cool. But they seem to have forgotten the millions of us here that aren’t under 20 who simply can’t read the logo without a struggle. The logo completely ignores an entire demographic for an event aimed at all of us. And, this seriously pisses me off.

You’re likely saying “come on, it’s not that hard to read”. It is. When I first looked at it, I had to think for a minute about what it actually says. When your market struggles to understand your logo, you’ve already lost.

Here’s an list of what is wrong with the design:

2 – the claustrophopic design creates an optical illusion to my eyes where the words and numbers do a bit of vibrating, making it a even harder to read.

3 – it’s unreadable from a distance.

4 – it looks dreadful shrunk down on a small screen, making it more difficult to read.

5 – the spacing and size of each character is erratic (the nicest description I could come up with). The differences seem to have no purpose other than to squeeze the design into an alloted space.

6 – the type is jagged looking. It has the appearance of being hand drawn with a thick black marker. Sorry, but this makes it look amateurish and sloppy. Not an image Ontario really wants to convey.

8 – there is NO ENERGY, which, when I look back at my rundown, is the single biggest fail.

Come on,  where’s the excitement about the celebration? Where’s the vibrancy? The colour? Where’s the sense of space and breath-taking beauty? Ontario is 1.076 sq kilometres (514,600 miles for my American friends) of cities, towns, villages, farms and wilderness, wild and wonderful woodlands, the Canadian shield, carpets of trilliums in the spring, red maple leafs in the fall, maple syrup, BBQs in the sunshine, strolls along the Sandbanks, paddling along a quiet shore in Algonquin Park, listening to loons cry at dusk,  thousands of lakes, snow, heat, cold, rain, ice fishing, rushing to catch a subway, the sounds of a streetcar grinding on the tracks, street festivals, Shakespeare & Shaw, sitting at Timmies with friends, espresso, microbreweries, wineries, food … oh the food, lining up for Dim Sum, film festivals, a trip to the local amateur playhouse, bush parties, bhangra lessons in city chambers, Pow Wows, May 24 weekend & cottage country, cultures merging from every corner of the earth, history spanning back thousands of years to the first peoples and the Ontario goverment gives us … our parents’ basement. 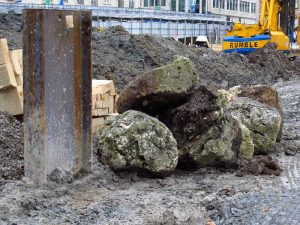 Big rocks, mud ‘n more mud – Construction Still Life Scenes
I think I told you yesterday it was muddy across…
← Well, there’s your problem Sun – more headline mixups
We use cookies to ensure that we give you the best experience on our website. If you continue to use this site we will assume that you are happy with it.OkNoRead more