I’ve been chewing over a font that is getting under my skin lately. Take a look:

It’s Old Printing Press, created by Font Café in 2011, or as I call it Olde Printy Presse (OPP for short). I’ve used some of their fonts in the past, and like their work, they do great stuff, except for OPP. They promote it with this “Stop the press! Bring back the Renaissance with this old style typeface, great for documents needing an enduring antique look”1. ARRRRGGG! Nothing in Olde Printy Presse is remotely similar to Renaissance printing. Here’s the font table:

I’m going to assume, based on OPP, the Renaissance never printed numbers or at least managed to master printing them correctly. Why is there an assumption printers, prior to the magical digital age, produced sloppy, unreadable work?  Just one peak at the Gutenberg Bible tells the casual viewer this is absurd:

They were works of art:

Printers were professionals who trained for years as apprentices.  What Old Printing Press looks like is a mimeograph copy. Remember the mimeographed handouts we used to get? All the millennials can go sit in a corner while the oldsters have a chuckle. The world was divided between those who snorted the fluid fumes from the paper and those who held the still damp handouts by fingertips, flapping the offending document in the air to dry.  Some of those handouts were brutal and looked like OPP. Hard to read, wrinkles embedded in the copy, wretched … yea, those old high school memories!  Anyone who’s grown up in the age of photocopies, won’t understand how truly dreadful mimeographs were.

Anyway, the assumption printing presses were sloppy astonishes me. My great, great, grandfather was a printer who apprenticed in England.  He came to Canada as a young man and set up his own printing business. He passed that onto his sons who continued his business and moved it onto a full publishing company that produced a well-known newspaper.  Unfortunately, the printing company was a dusty memory by the time I appeared onto the scene. Over the past decade I’ve looked at what they produced and discovered a latent appreciation for their work. Typography, layout, production – all were done with care.

Which brings me full circle back to my pissy little rant. Any printer worth their salt, would not have sanctioned anything like that font represents. I can see a great deal of fun in the typeface (one day I’ll learn when to use font and when to use typeface, but in the meantime, humour me). It has a purpose, but holy Hana change the name to Mimeograph, Sans Addictive Fluid not Old Printing Press. It is not an authentic representation of old printing presses, from the 1920s or the Renaissance.

Sure there were bad printers. I’m not saying there weren’t. My point is, the font misrepresents old printing as somehow amateurish and slipshod.  Even the lowly little Victorian era chapbooks, looked better:

The Berkshire lady’s garland. And Margaret and the minister.

Granted, not all were well produced, but by and large, the printing was very good. As the British Library points out, the printer took pains to choose the right typography and style for each little book.2

I think what the designer was trying to do was replicate this:

http://digital.nls.uk/107740776
Account of some imginary apparitions, the effects of fear or fraud
From various authors. Dunbar : Printed for and sold by G. Miller at whose shop may be had, a variety of small histories, sermons &c.
Catechisms, ballads, children’s books and pictures. Whole sale and retail., [1795-1804]. Book National Library of Scotland

The print above is a example of a poorly produced chapbook, poor print quality, seriously foxed paper and not aging well, but it’s still infinitely easier to read than OPP. Old Printing Press exaggerates these flaws to such an extent, it is a pale caricature a printing press and it certainly does not represent the Renaissance.

I’ll end this with one of my favourite example of early print: Aldus Mantius’ Hypnerotomachia Poliphili from 1499, a masterpiece from the maligned Renaissance era:

Aldus Manutius of Venice printed Hypnerotomachia Poliphili (The Strife of Love in a Dream) in 1499. Everything about the book is quality – from the layout, to the choice of font and actual printing. There’s a flow to the layout, and energy. And not a sign of sloppiness to be seen.  There is nothing in Old Printing Press that resembles the Rennaissance.

Art in the form of the printed page.

If you enjoyed this article and would like to see more on the history of typography, let me know by leaving a comment or hitting the FB like button.

2. The National Library of Scotland and the British Library have a delightful selection of Victorian era chapbooks on digital display. http://www.bl.uk/romantics-and-victorians/articles/chapbooks and http://digital.nls.uk/chapbooks-printed-in-scotland/pageturner.cfm?id=104184103 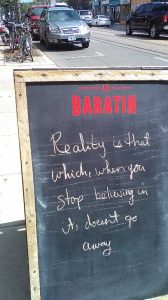 Little Portugal, French cooking & a lazy Monday afternoon in Toronto
Went for lunch with a friend this afternoon. She wanted to…
← Another corporate logo update – Sears
We use cookies to ensure that we give you the best experience on our website. If you continue to use this site we will assume that you are happy with it.OkNoRead more