Are you still using Google+? Hopefully you received the note about it’s pending demise.  Google is putting an end to their social media experiment on April 2nd.  G+ has limped along for years, never really taking off with the public. Forbes magazine ran an article back in 2015 titled Five Reasons Why Google+ Died. It’s taken another 4 years for Alphabet to bury the corpse.

Google Plus, the company’s social network, is like a ghost town. Want to see your old roommate’s baby or post your vacation status? Chances are, you’ll use Facebook instead. Feb 14 2014 The Plus in Google Plus? It’s Mostly for Google by Claire Cain Miller behind a NYT paywall article.

The New York Times was right. People may have signed up for an account, but they weren’t visiting it on a regular basis, like they do Instagram or Facebook – people just didn’t take to the platform. I played around with Google+ for a bit but quickly gave up because it was just too messy to work with. I didn’t enjoy posting or looking for new material. And quite frankly it was more bother than it was worth. I saw very little return for my effort.

So what does this mean?

1 – If you have a lot of photos on your G+ page, think about  moving them to a safe place because they will be deleted after April 2. Google will allow you to download & save your content  prior to the close date – see this article for help Download your Google+ data.

NOTE:  photos stored on Google Photos will not be affected. This is a separate entity.

2 – Using Google+ to sign in will no longer be an option after April. Any + sign-in button will become non functional. Google will be replacing the feature with a basic Google sign-in option.

3 – Comments will vanish. Sorry folks, but any comments you left while signed in with your Google+ account will simply go away. This is already happening on Blogger sites, so if you are a Blogger user and start seeing comments disappearing, this is the likely culprit.

If you missed the email notification, visit the Google page Shutting down Google+ for consumer (personal) accounts on April 2, 2019.

** Evidently some people think Gmail accounts will be closed. This only affects Google+, the social media platform. It will not touch Gmail, Google drive, Blogger, or Google Photos. 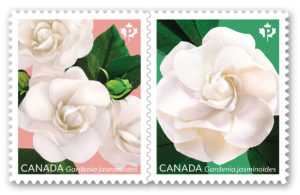 Canada Post’s gardenia stamps
Spring is in the air for stamp collectors, courtesy of…
← Presto Card has an app, but don’t get too excited
We use cookies to ensure that we give you the best experience on our website. If you continue to use this site we will assume that you are happy with it.Ok