A struggle to get a realistic pencil sketch 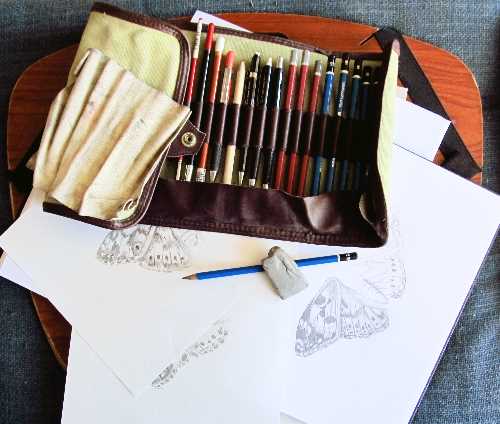 My pencil sketch of a butterfly isn’t going well. I’m not sure what I’m doing wrong, but it just isn’t working out. It’s ok. But none of my attempts are realistic so far. To improve, I am keeping a journal of the steps taken to draw a realistic butterfly.

I couldn’t seem to get the pencil strokes right.  The pencil sketch has more of a draft feel to it, but the delicate wings are baffling me. I can get the body and the shadows, but how do I capture a realistic feel to the wings? 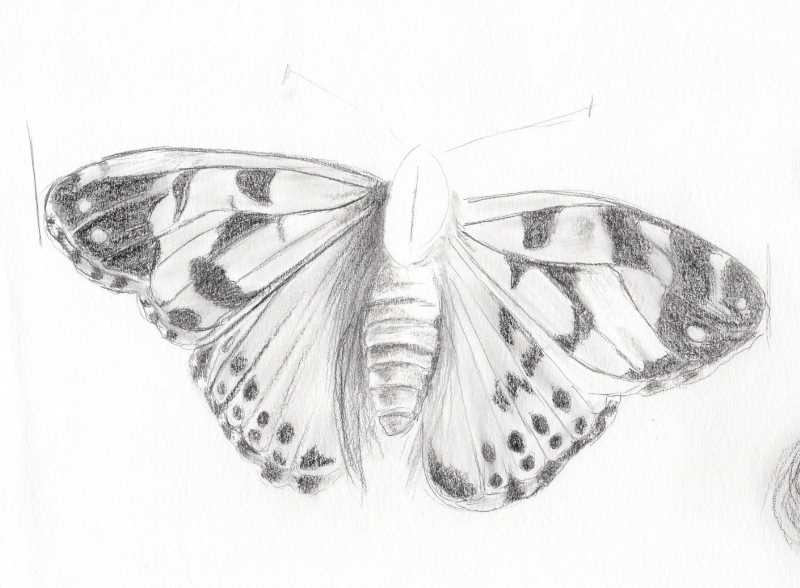 I became frustrated with this and abandoned it.

Can’t remember what paper I used. It’s something I have laying around for doodling on. I thought maybe, I need rougher paper, something that would grab the pencil lead a bit more. Butterfly 1 was set aside. 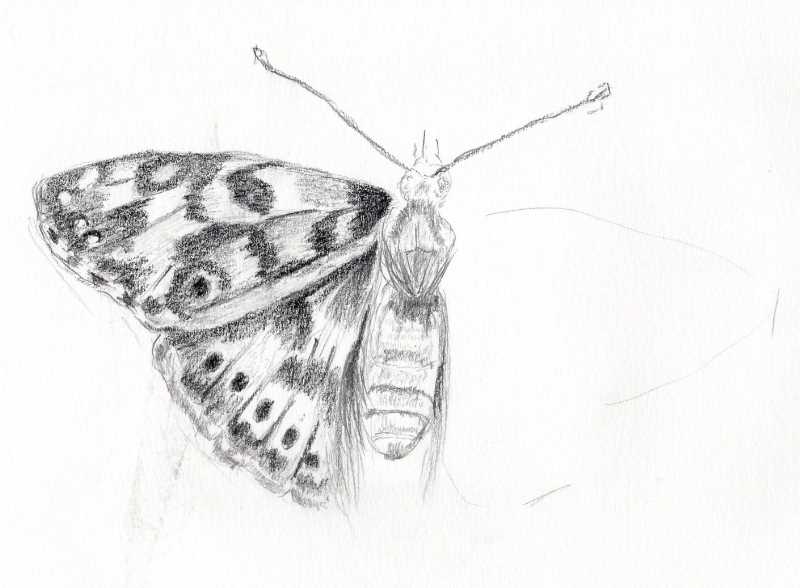 Hmm, ok, but not realistic

I stopped at the body. The entire sketch wasn’t working. Still very two dimensional. I switched up the style and tried a stippling pattern on some of the wing portions, trying for a less mechanical feel to the bug parts. I spent about an hour working on different strokes and styles, moving between a mechanical pencil and regular pencils of various lead types. I tend to rely on 2b pencils more than I should, but I love the way it feels running across paper. And that’s where I went wrong, again, with this drawing. It’s too uniform in the blacks, and I didn’t leave myself room for lacy sections of the wing.

Looking at the second drawing makes me think just a mechanical pencil should be used. Start with a basic HB and then gradually shift to a softer led?

In search of sketching help

I watch several YouTube artists channels that have helped enormously. In this instance, I need something a bit more butterfly oriented. This one is useful for the basics How to Draw a Butterfly Step-by-Step.  It’s helpful in understanding the outline and patterns but doesn’t get down to sketching a realistic butterfly with pencils. This next site has a bit more shadowing details Easy Drawings and Sketches. I like how they shade parts of the wings to give them depth. Both helped in understanding butterfly bodies.

Third kick at the pencil can 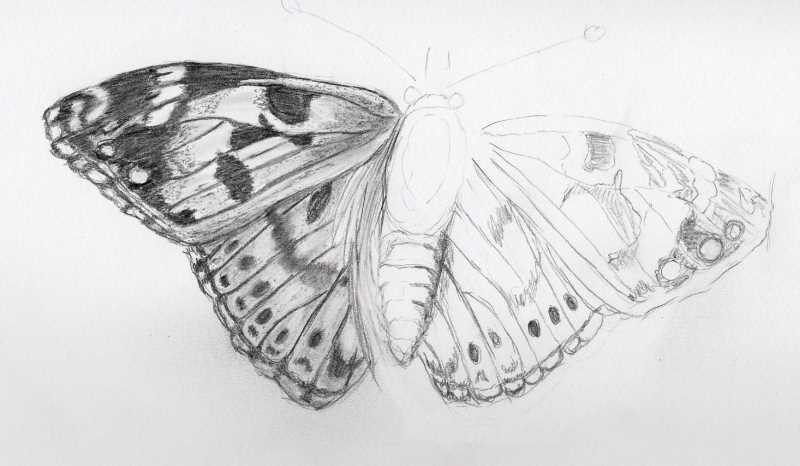 Third try and it’s still not there

This one is better, but still missing depth. I’ll go back at it tonight and see how the second wing fleshes out. This time I used a gentler hand on the shading and switched up between the mechanical pencil leads and a very sharp 6b for the darkest spots. Keeping the point on a 6b is a trial.

The body has potential but needs more work. The soft feathery bits around the body need more depth and an airy feel to them, but that’s easy to correct as I go along. At this point, I’m not sure what I’m going to do for the head. I’ve spent so much time fussing with the wings. I haven’t even thought about it.

Although the wings are better defined in this sketch, I still went too heavy handed on it. That’s my drawing kryptonite. I never know when to stop with the shading and strong strokes. But the patterns are much better this outing.

There’s still an element to the butterfly’s structure I’m missing. Something about them I’m not understanding. More research is required.

Butterfly biology and summing up

This has been a maddening and satisfying exercise. I’m attempting to push myself creatively and try drawing things that … are scary to draw. No, butterflies aren’t frightening (at least to me). The fear of failing is. It’s easy to start a sketch and give up when it doesn’t work. I’m applying the ideas I’ve acquired from my amateur photography sessions to my drawing – just keep at it. Examine everything, look for tips and hints from people who are better and keep a progress journal.

One thing I did when I started drawing birds was look at ornithology texts. I went through many books and websites that dealt with detailed anatomy of bird eyes, feet, beaks, and differences in feathers. It wasn’t until I understood more about bird anatomy did my drawings improve. At that point, my pencil sketches took on a realistic feel.

I also took several trips to the Royal Ontario Museum and used their ornithology resources. The ROM has “birds on a stick” you can access to see the details up close. Their material is first rate and accessible for novices like me. I spent hours doing nothing but drawing bird feet, beaks, and eyes. Unfortunately, that’s not a luxury I can tap into at this time. I’ll have to make do with internet resources.

My recent searches took me to Cornel University’s little pdf The Biology of Butterflies compiled by Emily Kearny, Cornell University, 2010. It illustrated what I’ve been doing wrong.

Do you see what I’ve been missing? Two vital misunderstandings of butterfly anatomy. First is the wing order. There is a forewing and a hindwing. That clarifies how the shadows on the wing should fall. It’s a subtle aspect, but important.

The bigger triumph of knowledge is in the second image. Those lines I’ve been glossing over are wing veins. They aren’t the pattern, they are veins. Funny how this bit of information has made me want to try a new butterfly pencil sketch. Knowing where all the veins are, are like following a road map to the butterfly’s design. This is exciting.

So, there you go. You get to share my successes and failures. Although, I hesitate to use the word failure in hindsight. Less a failure than a building block to achieving stronger skills.

Use Skype without an account for meetings
Microsoft has rolled out a few useful updates lately, the…
← Another stab at close up photos
We use cookies to ensure that we give you the best experience on our website. If you continue to use this site we will assume that you are happy with it.OkNoRead more