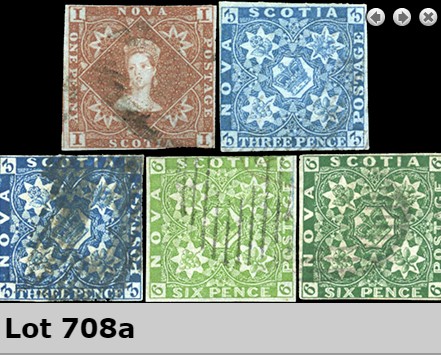 Well, this was fascinating. I kept an eye on the Maresch & Son auction from earlier this week. I suggested in my post from the 21, the stamps might go for significantly less than the estimate and I was correct. Mind you, it didn’t take a clairvoyant to figure out the prices would be lower. With the current economic crash and pandemic fears, people are being extremely cautious. I was surprised at how low some went for. Makes me wish I had been in a position to bid on them.

The collection of early Canadian airmail proof cachets sold for less than half the estimated $1000 value. Someone snagged them for $425 (cdn). This could be a great centre-piece for pioneer airmail collectors. I have about 20 different cachet covers and  love looking at them. 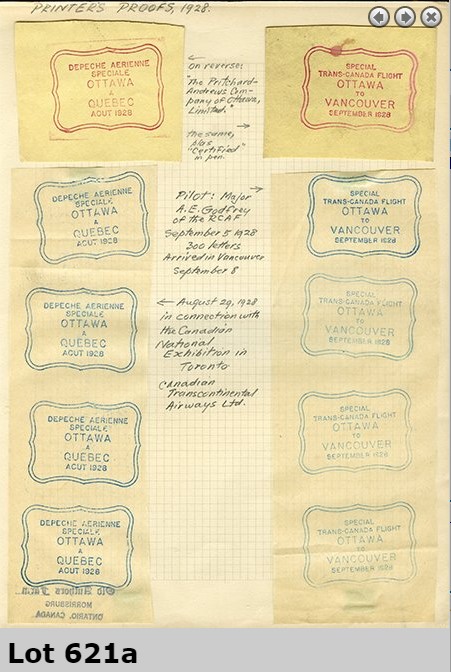 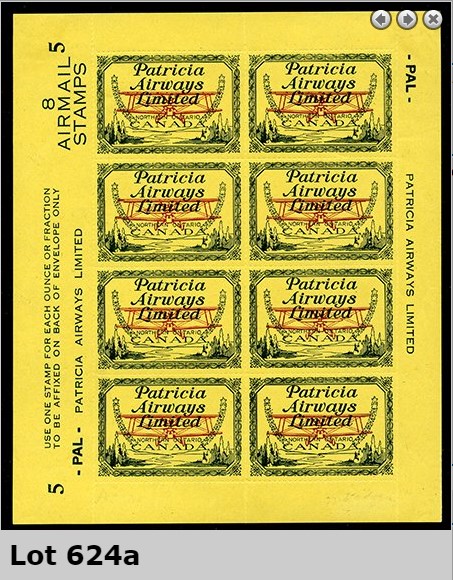 Valued at $480 sold for a mere $177 (cdn). Oh what a bargain. This one made my heart skip a bit. I own just one Patricia and coveted this full sheet. Ah the sins of stamp collecting. 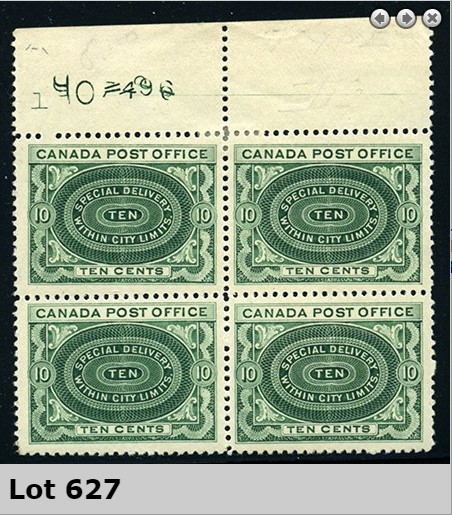 It was a big surprise and I’m sure collector of Nova Scotia stamps received a hell of a shock when their $325 (cdn) bid won a lot estimated at $2200.

Not all lots sold for far below the estimates. A few even exceeded the predicted price. But that’s the way auctions go. Some days bargains are to be had and other days, bidders war breaks out. The pandemic certainly had an impact. I’ll be watching a couple of upcoming auctions to see if this was a one off or not.

Check out the prices realised at https://stampauctionnetwork.com/RM/RM557.cfm . Not sure how long it will available so don’t waste time. 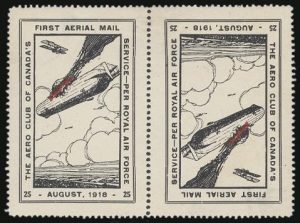 I’m back lurking around Vance Auction’s  October listings, this time looking at the airmails. Oh and be still my beating heart! The first offerings in Canadian semi-postals knocked my socks off. Now is the time to dig up some extra cash and go wild. What has my pulse racing? Check them out: 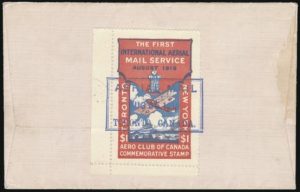 The cachet is strong and doesn’t look like it’s suffered any fading over time – ‘AERIAL MAIL AUG 25, 1919 TORONTO CANADA’ .  All three are worth checking out if you’re a semi-official collector. Check out lots 6760 to 6762. 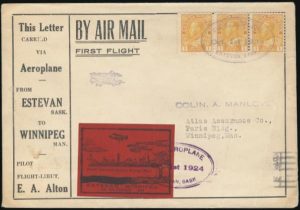 Talman auction set for sometime in the fall

John H. Talman stamps will have an auction sometime this fall.  At last. I’ve been waiting months for the announcement.

He’s going to keep us waiting for the date, but I expect it’ll be sometime the end of Sept.  It’s been awhile since his last auction and I’m really looking forward to it. If you’re in Toronto, it’s a chance to attend a friendly, relaxed auction with some nice people in attendance. I enjoy his auctions, but don’t get down to them often.  Hopefully I’ll be able to go this fall. Auctions are usually held at the Eagle’s Club at  17 Elm, Toronto ON M5G 1H1, downtown but check back closer to auction day to be sure.

There are only 17 items posted to date, and no images.  Talman usually has a good selection of airmails, and superb Canadian covers on offer but we’ll have to be patient until the rest of the items are listed. It’ll be interesting to see how the catalogue shakes out -> http://talmanstamps.com/

And before I forget,  check out Talman’s page over at Hipstamp for ongoing online auctions -> https://www.hipstamp.com/store/john-talman-stamps-collectibles. If you aren’t familiar with HipStamp, it’s a safe and saner alternative to eBay, which is so rife with scammers I turn a cynical eye to pretty much most sales now.  There is also a section for postcards (HipCard) and comics (HipComics) which I’m going to start looking thoroughly examining. Yes, I collect comics – well only Scrooge McDuck comics, but I enjoy looking through the selection. I’ll throw interesting items up, from both postcards and comics, as I see them. Lots of fun!

For those  following my previous post on Vance Auction’s Hindenburg salvaged mail, that auction is tomorrow.  Results usually take a couple of weeks before they’re posted, but I’ll keep an eye open for realised prices. I can’t wait to see if it comes close to the 8 grand listed. 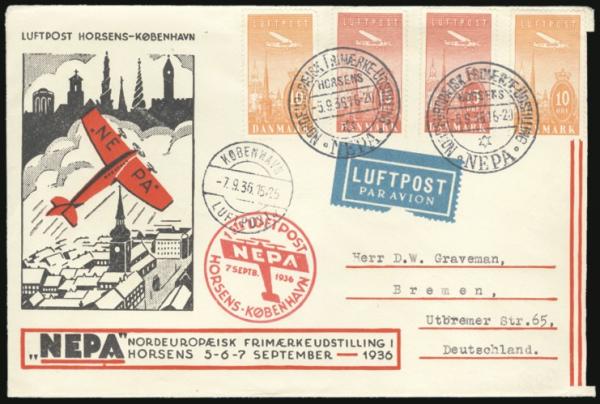 What’s up – this month’s Vance auction

Time to ogle the latest Vance Auction catalogue for Wednesday, March 21, 2018!. A cursory look popped up dozens of gems. One of my favourite categories is First Flight covers (FFC) ad as expected, there are a number of lots offering Canadian FFC from the 1920s to late 30s. Many are reasonably priced for airmail fans on budgets. One lot, in particular, that caught my eye is a shoe box full of covers and postcards, including “multi-franked airmail, mainly from Vatican City & USA but has many other countries incl Malta, Br. Africa, Peru, etc”. Est price is only $100 and would be a fun sorter box. (lot 971).  Most of the covers are too recent for my tastes, but if you collect post-1980s covers, this may be the pick of the lot. Here’s one that I have my eyes on:

Beautiful Denmark cover “Horsens to Copenhagen / North Europe Philatelic Exhibition 7 Sept 1936”. This one hits all the marks – cancels are crisp, colours, vivid, clean stamps. Overall a fun cover estimated price $75. (lot 2029). I realised today I don’t have any Danish airmail! So, this is on my list to watch. But this one sets my heart beating: 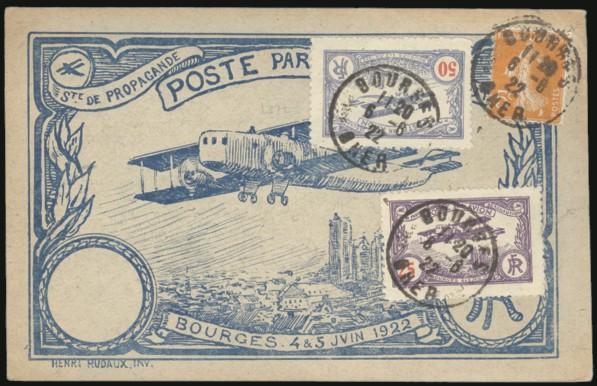 No one does airmail like the French. The early stamps and postcards were works of art in themselves. This 1922 exhibition card is perfect example and expected to fetch $125.  (lot 2129) I’m still sifting through the Canadian semi-officials and airmails, so I’ll post my favourites later.