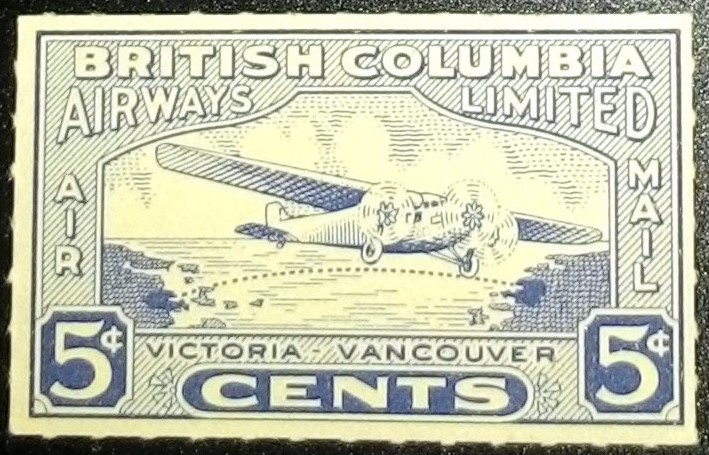 Buckle up stamp fans, time for a story about BC Airways and another foray into my favourite area – Canadian history and airmail.

If you are an airmail collector, you should look at Canada’s fascinating semi-official airmail history. Semi-officials were a branch of airmail stamps, issued by individual airlines. Canada Post sanctioned the private printing, allowing airlines to collect fees for delivering mail, usually to remote bush areas like the northern mining communities. Although the stamps were supposed to be affixed to the back of a cover, they often snuck onto the front, proudly displayed beside regular postage.

It’s a rich history to explore for airmail and pioneer aviation fans alike. If you happen to be a history buff, well bonus all around! A couple of sources will help you explore semis – van Dam’s catalogue and website are treasure troves of information. van Dam is also one of the most reliable sources around for purchasing semi-officials.  You can pick up copies of Unity Canada and Sanabria Airmail catalogues for pricing and a bit of information about the flights. Sanabria is harder to find, but copies occasionally pop up on eBay.

The best book is The Pioneer and Semi-Official Air Stamps of Canada 1918-1934 by Longworth-Dames. Semi-officials are ignored by Scotts and Gibbons general catalogues, though they might be in one of their speciality catalogues. If you are serious about semi-officials, you need van Dam and Longworth-Dames, although I do wish van Dam sorted their dreadfully dated website out. I bang my head on the keyboard every time I use it.

Today’s offering is from one of Canada’s shortest-lived airlines, British Columbia Airways:

BC Airways served the Vancouver-Victoria-Seattle area. They issued a single stamp before the airline folded in 1928. BC Airways was formed Nov 27, 1927 and flew a Ford 4-AT Trimotor: 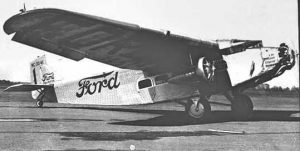 Ford Trimotor 4-AT – The Tin Goose

The Ford 4-AT was an excellent beast. This trim, 3 engine monoplane cut a dashing figure in a day when biplanes were still common. The Tin Goose (as it was affectionately called) hauled freight or 8 passengers and 2 crew and saw service in every corner of the world. 79 4-ATs were built between 1927-1933 by the Ford company. Its iconic shape is instantly associated with the romantic, golden age of air travel. Pan-Am flew them on their Havana-Cuba route. Amelia Earhart flew one. Lindbergh flew an AT across the Atlantic and Admiral Byrd flew an AT on his flight to the South Pole. It was an amazing aircraft used by bush pilots, passenger airlines, and the military.

Capable of carrying 8 passengers and 2 crew, the 4 went into service delivering freight and mail on it’s first flight July 23, 1928. The semi-official stamp was printed Aug 3, 1928 and the first official airmail flight went out Aug 4. On Aug 16, the airline began taking passengers across the San Juan de Fuca Straight. Less than 2 weeks later, the company ended with the crash of their only airplane. On a foggy Aug 25 morning, BC Airways, piloted by Harold Walker, from Seattle (an airmail pilot) and L. Carson of Victoria, co-pilot, crashed into the water near Port Townsend, Washington. Both crewmen and 4 or 5 passengers were killed. 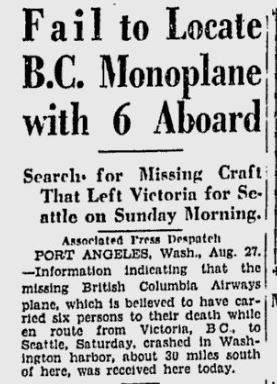 Ottawa Citizen article on the 1928 crash

The crash made headlines in many major papers. Not only was it Canada’s first passenger plane crash, the flight also carried some notable people. The Ottawa Citizen reported the airplane was last seen flying over Port Hadlock, so low, people could read the words on the fuselage. Eyewitnesses said it was missing motors and heading for the bay. A fisherman saw a monoplane fly overhead and crash some distance away. By the time he got to the site, there was no sign of the plane or passengers. There were a few reports of oil patches on the water, but no wreckage was ever found despite extensive searches.

On board was Alexander McCallum Scott, an barrister and MP from Glasgow, Scotland, along with his wife. Scott was a personal friend of the former UK Prime Minister Ramsay MacDonald, so the crash received extensive coverage. Also onboard was Dr D. B Holden from Victoria, a doctor in Victoria for 38 years and Thomas E. Lake, a manager with Union Oil, just returned from managing a branch in Asia. A few sites say there were 5 or 6 passengers, but these were the only people I could verify. Contemporary reports all indicate 4 passengers, 2 crew.

Shortly after the crash, BC Airways folded. Whether due to the crash or not isn’t clear. Airlines in the ‘20s and ‘30s came and went with astonishing speed.

This 5¢ stamp is easily found. It was printed by Colonist Printing and Publishing Co., in Victoria and issued 1928. According to Sanabria, 110,000 stamps were printed but that figure doesn’t sound right. This was a small company with a limited route and no hopes of delivering that many letters. The average print for many semi-officials hovered around 3000 – 5000, not in the tens of thousands. I’ve misplaced my Longworth-Dames so can’t verify the number. But I’ll bet a toonie, the number is incorrect.

A single mint copy can be bought for $12.50, lower for ones with small defects. Covers are far more expensive – a good quality one fetches $170 on average.

There are a couple of known flaws to watch for in this issue:

The flaws increase the value from around $12 to $50 per stamp. The singles are easily found, lots floating around to pick up. Even the flaws are fairly common. Covers can be found at most airmail auctions and van Dam always has a couple of lovely covers to look over.

One last article about the crash 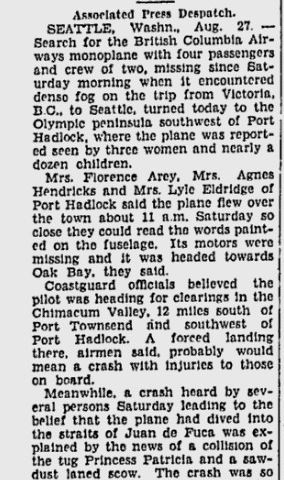 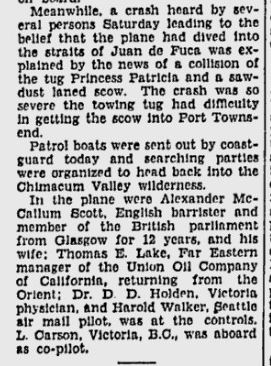