A simple urban pencil sketch – snippets of life in Toronto

For years, I’ve wanted to try my hand at an urban pencil sketch. Drawing random snippets of life in a single frame has an emotional appeal to me. I’m attracted to any pencil sketches that show life in a city setting. But I’ve never been able to pull off a decent urban sketch. My sense of perspective is a bit off. It’s difficult for me to draw a street scene without everything looking slightly Daliesque. Domes slide off the tops of buildings, windows unaligned and a comical sense of proportions that throw the drawing into complete disarray.

I’ve bought so many “How to” books and read many websites that run through getting perspective correct, but after decades of trying I had stopped. My most heartfelt dream was to wander the city with a journal and sketch urban scenes on the go. I think, that’s why I eventually gravitated to a camera. Many of my shots are setup the way I see an urban pencil sketch unfolding. It’s difficult to explain, but this photo will help:

The photo above was taken about 2 or 3 years ago. I was standing outside Allen Gardens watching people wander through the building. I kept seeing each frame telling a story. Blink and the scene changed. This is the type of image I always wanted to sketch out. But the skills weren’t there. In hindsight, it was less skills than the fear of failing that held me back. I was so busy reading How To books, I forgot to say, “screw it” and just draw.

I spent yesterday working on a new pencil drawing titled Waiting for the Subway. I’ve been less than thrilled by photos I’ve taken lately so it was time to shift gears and focus on sketching for a while. Earlier I worked my way through a slightly lopsided butterfly. The sketch came out better than I hoped, but it also gave me clues as to where I go wrong. I realised, although I use little guides to get the proportions correct, I tend to ignore them, once I start drawing in detail. I focus too much on one side of an image (usually the left side, go figure) and don’t see the entire picture.  This in turn leads me to get one portion spot on, and the rest looking like it’s tagged on at the end.

Here’s the completed butterfly to show you what I mean 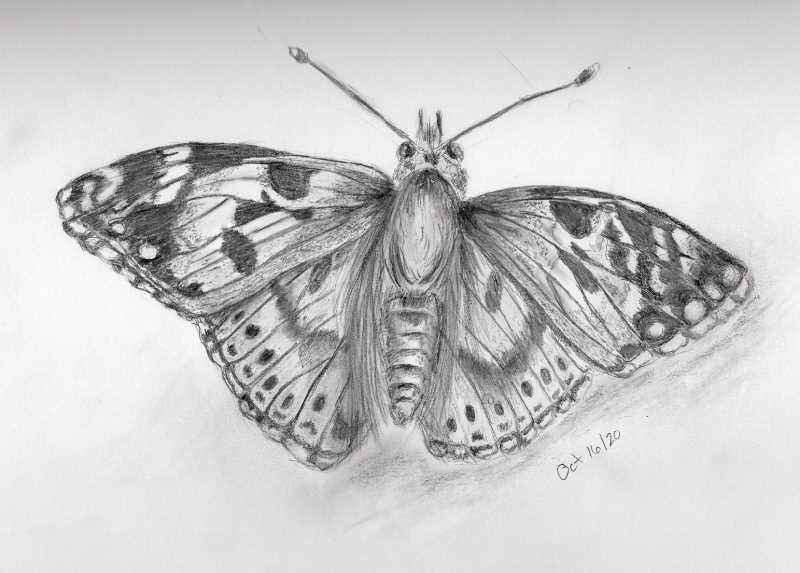 It’s completed, but a bit lopsided

I realised I need to work on both sides of the image to keep the proportions correct.  Critiquing the butterfly encouraged me to try urban sketching again. I started with a basic multistory building to practice. I carefully laid out the grid, laid out the edges of the building, and started layering in the bricks and windows. The drawing was lopsided, but not as bad as previous attempts. It was good practice.

Next attempt in my sketching forays was a photo I took while waiting for the subway. I used it as the basis of some digital art, but never tried to free hand the scene.  I measured the lines on the original and laid them out on the paper, carefully measuring the distance between the vanishing lines. Then, instead of starting on one section and working out, I created a complete outline, not just guides. 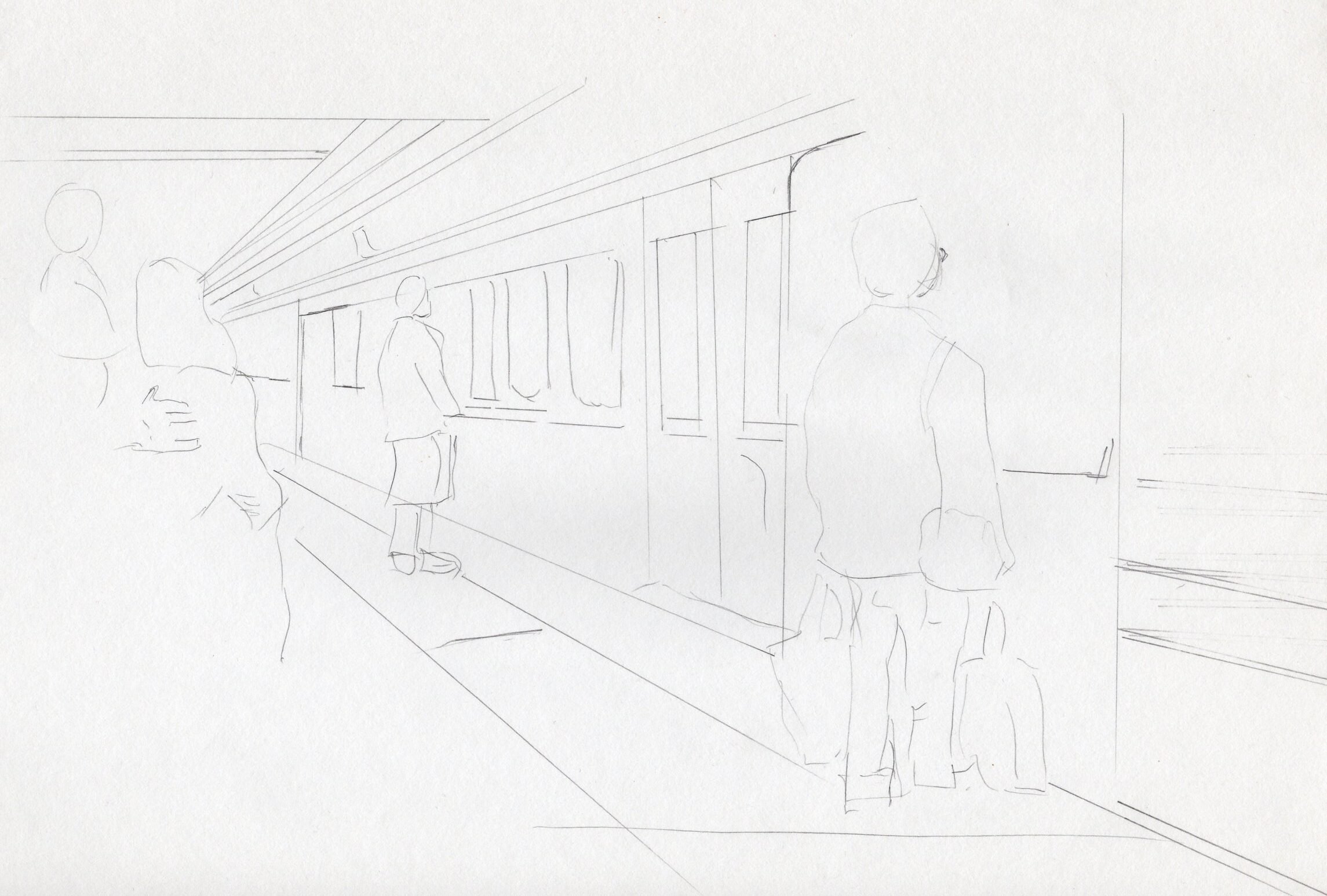 The basic outline of the subway at Union station

So far so good. I debated what pencil to use and settled on a mechanical pencil and gradually built up the framework. That’s my second fatal flaw, I start out too heavy handed when I draw and end up with a dark, heavy picture. 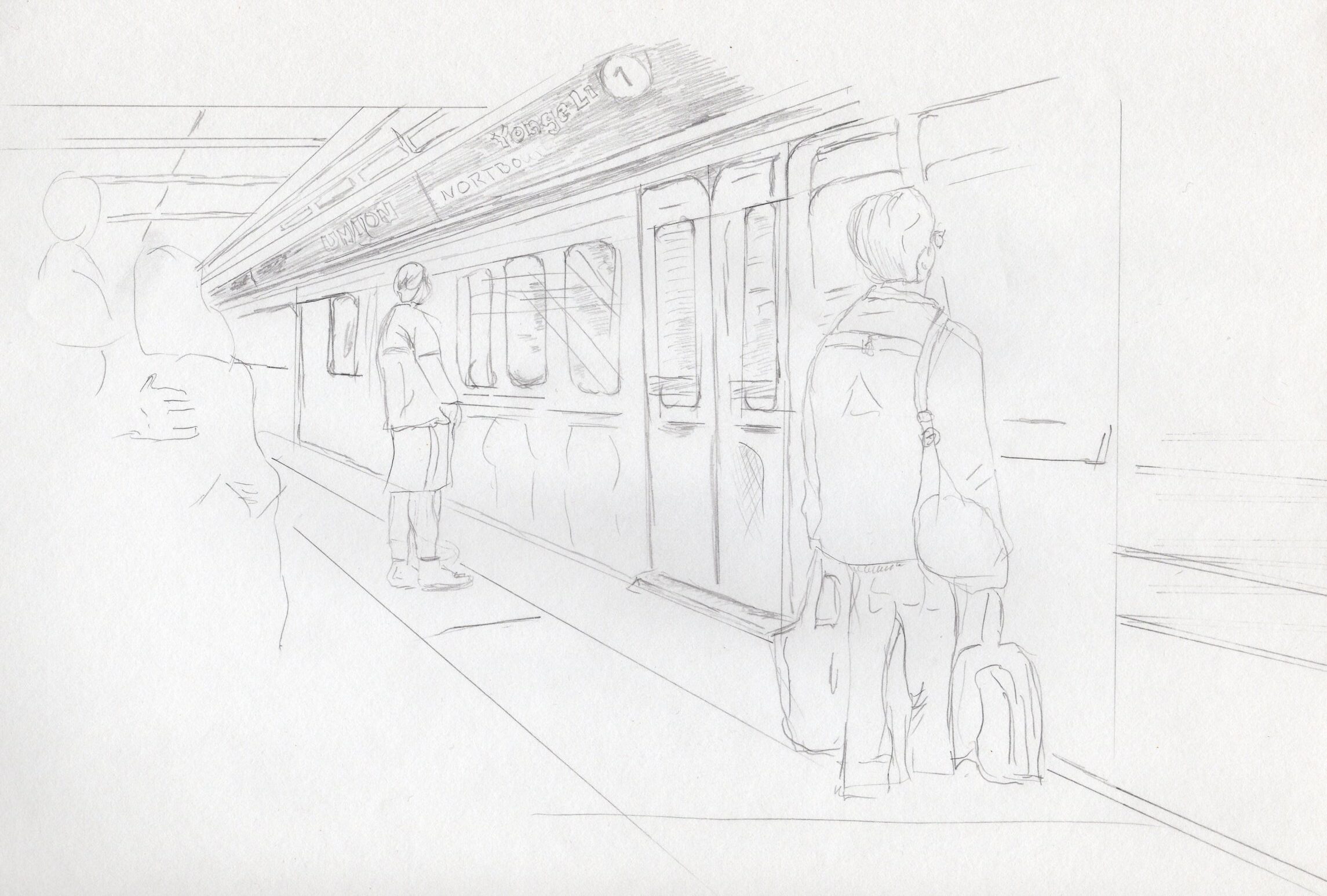 A bit of shading to flesh out details

I moved slowly, working back and forth, adding shadows, and building up the human figures. I also experimented with different shading techniques. Cross hatching works well for this sketch. 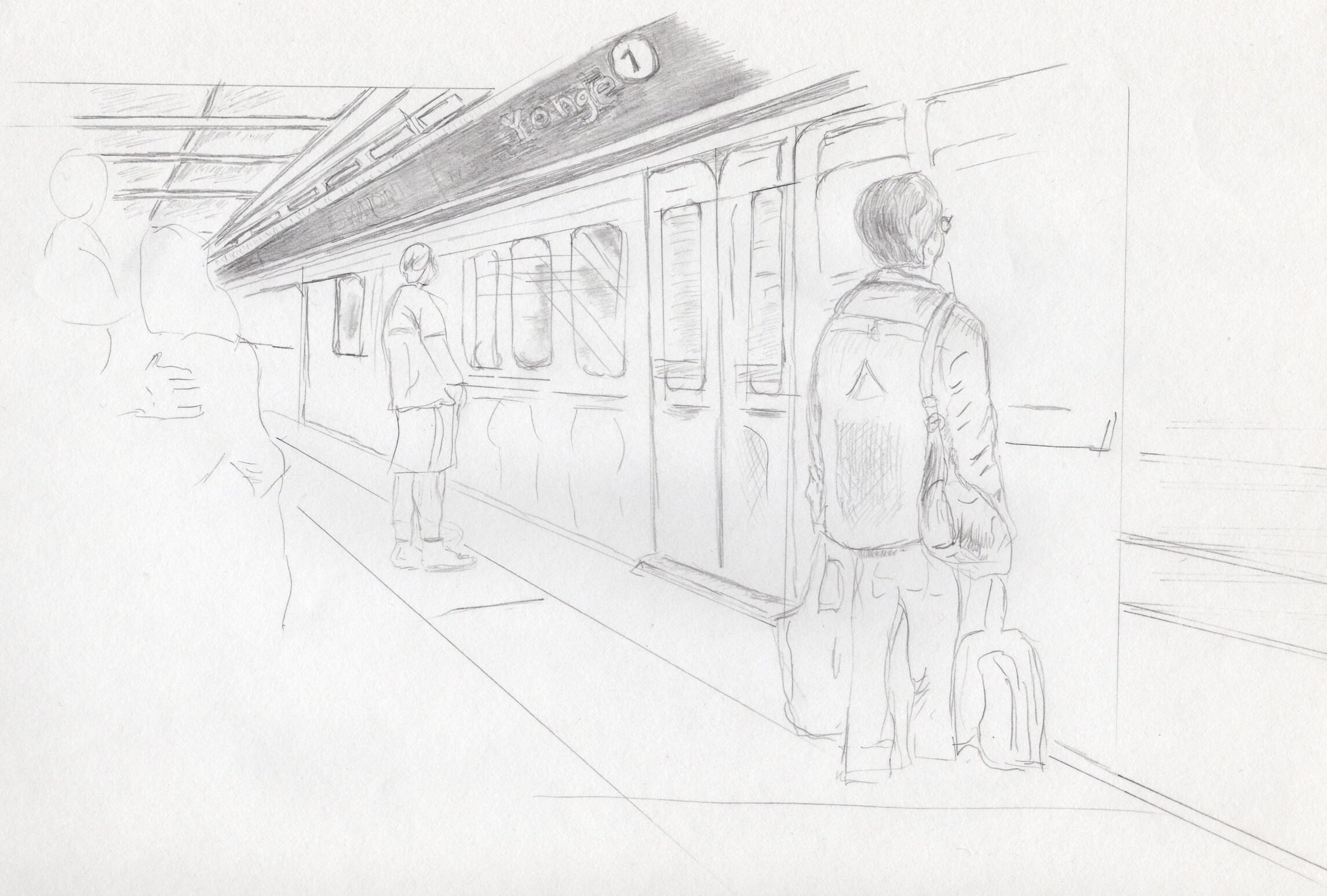 Working on the entire picture, rather than focusing on one small part, allowed me to make numerous micro adjustments as I went. It prevented the sketch from taking on that familiar unbalanced look.

Fleshing out the people on the platform 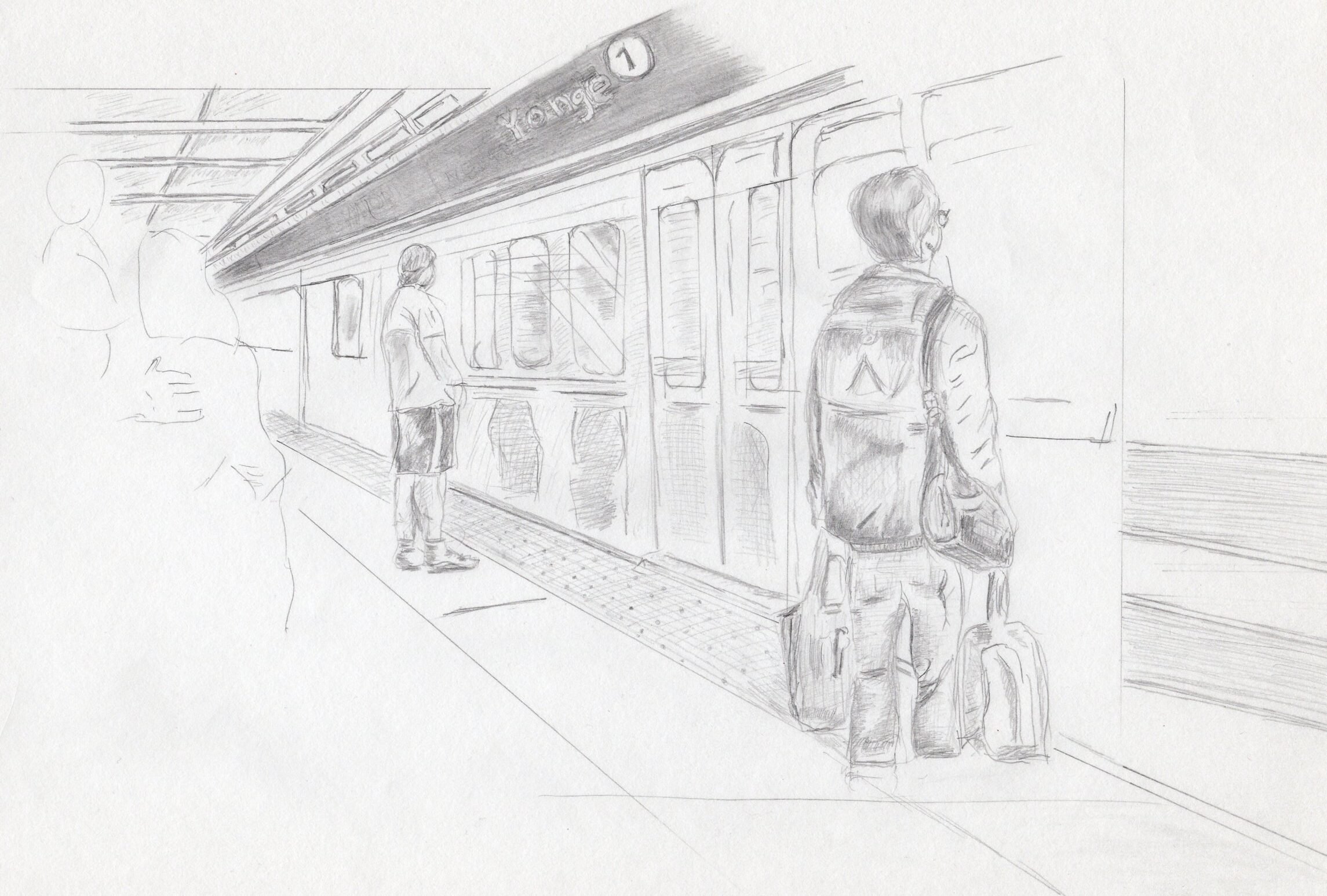 Slowly building up the shadows

I stopped at this point and evaluated the shading. Where did I want to go with this? I knew my history of over doing things, so I had to think carefully.

Time for my faithful 2B pencil 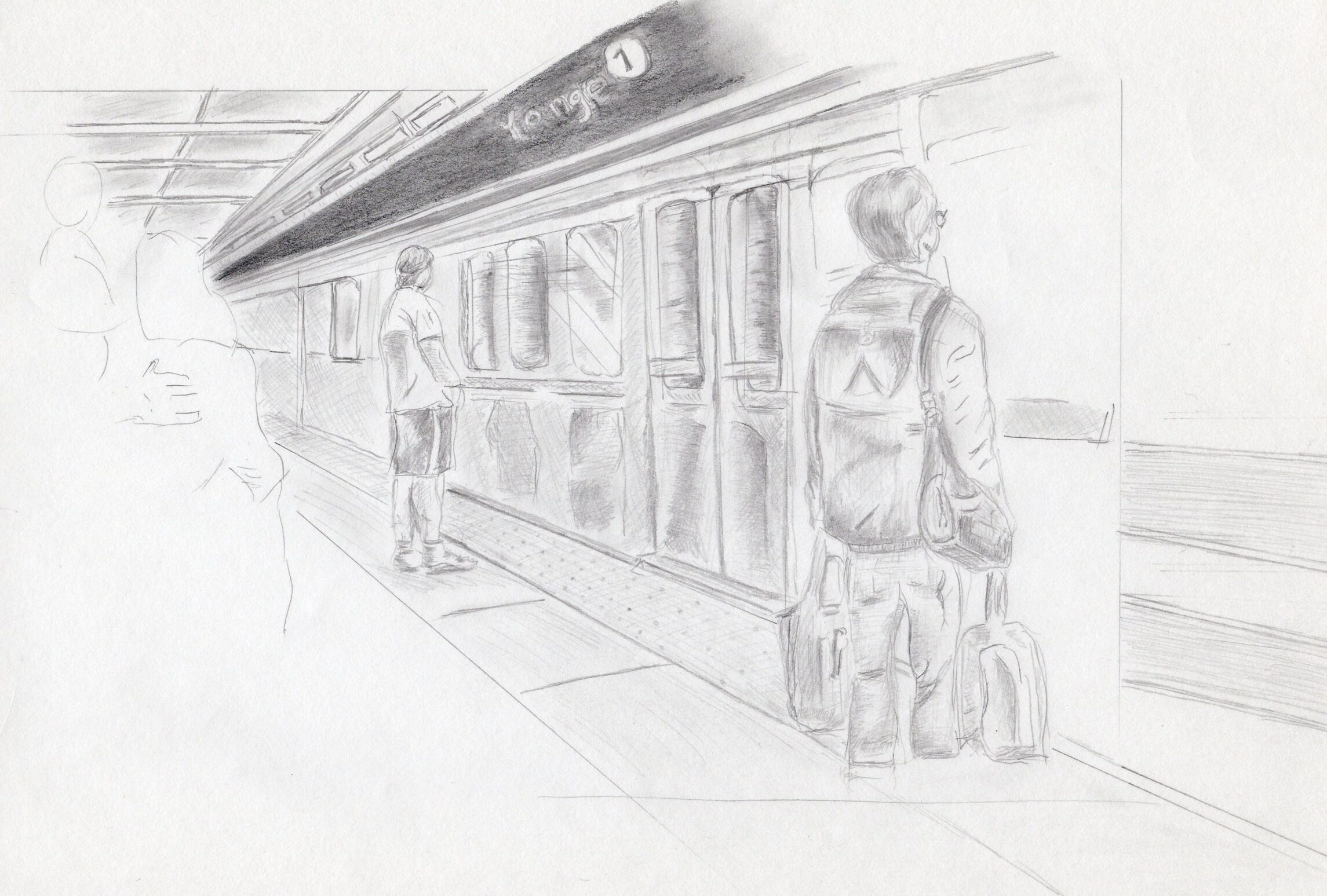 A darker lead was needed, so time for my beloved 2B pencil. I focused on the sign to give it emphasis.  I also used the 2B pencil on various parts of the clothing to bring out the creases and highlights.

My first urban pencil sketch completed – Waiting for the Subway 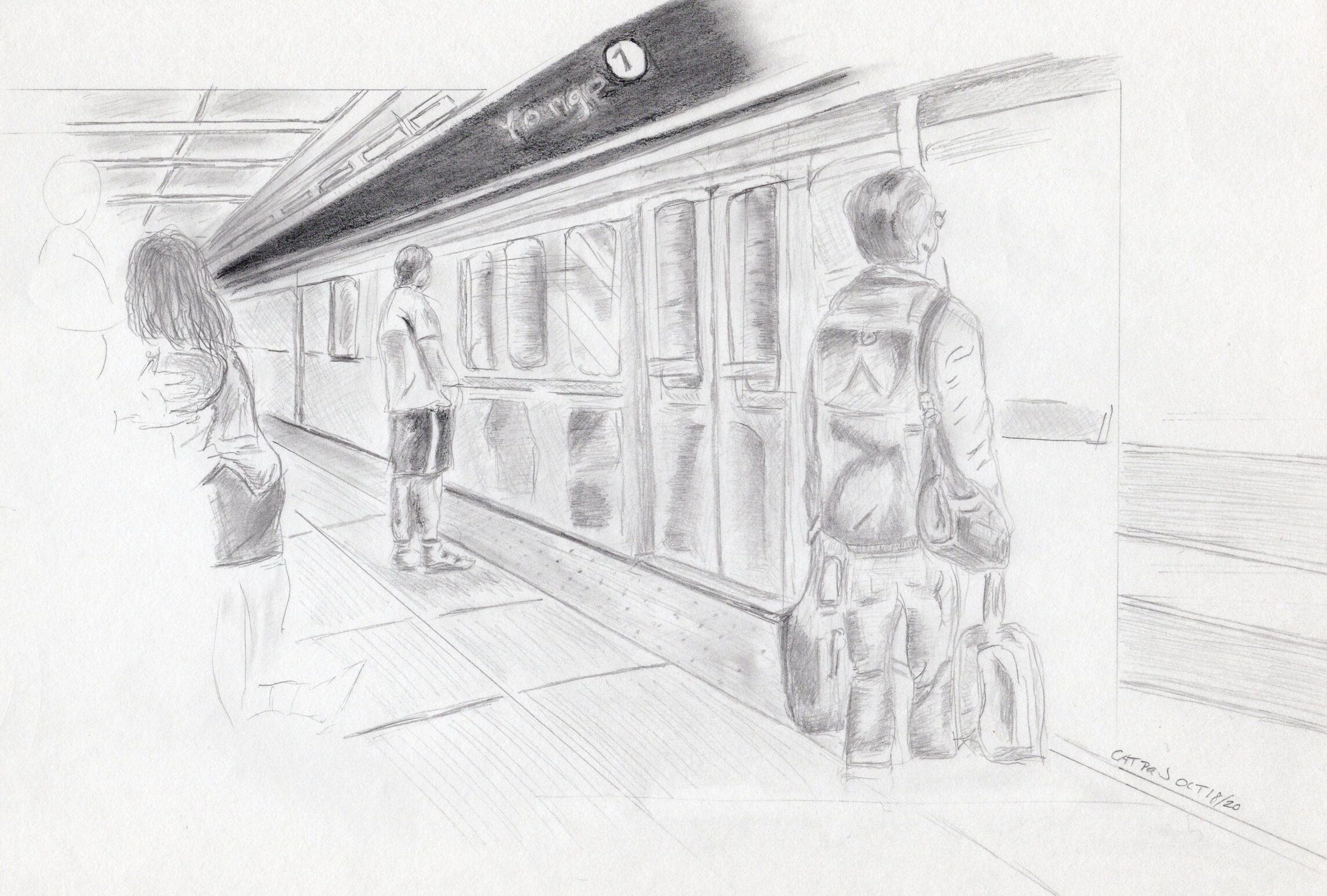 To complete the sketch, I used a 9B lead on the sign above the platform to make it really pop. It guides the eye along the platform and seems to pull everything together.

I didn’t finish the people on the left of the platform. I liked the way they started to come out of the wall. I also wimped out on the lady with all the bags. No feet. I struggled with them and decided no feet was the only choice. Overall, I’m thrilled to have pulled it off. My first genuine urban pencil sketch.

What will be my next urban pencil sketch? No idea, but I feel cocky now.

I’m working on my Wacom/Photoshop brush techniques. Well, that’s a flattering way of saying I’m trying to teach myself how to use different brushes in Photoshop. It’s quite amazing how flexible they are. I’ve spent years working with Photoshop, strictly for photos, never seriously looking to use it for original art. I’m working towards a full freehand drawing, but my brush control has a long way to go first.

To date, I’ve been using photos and doing line tracings of them and then “painting” them in. It’s a great way of expanding a brush skills. I’m working on a photo of Osgood Hall and Toronto City Hall I took a few weeks ago. Here’s the first pass: 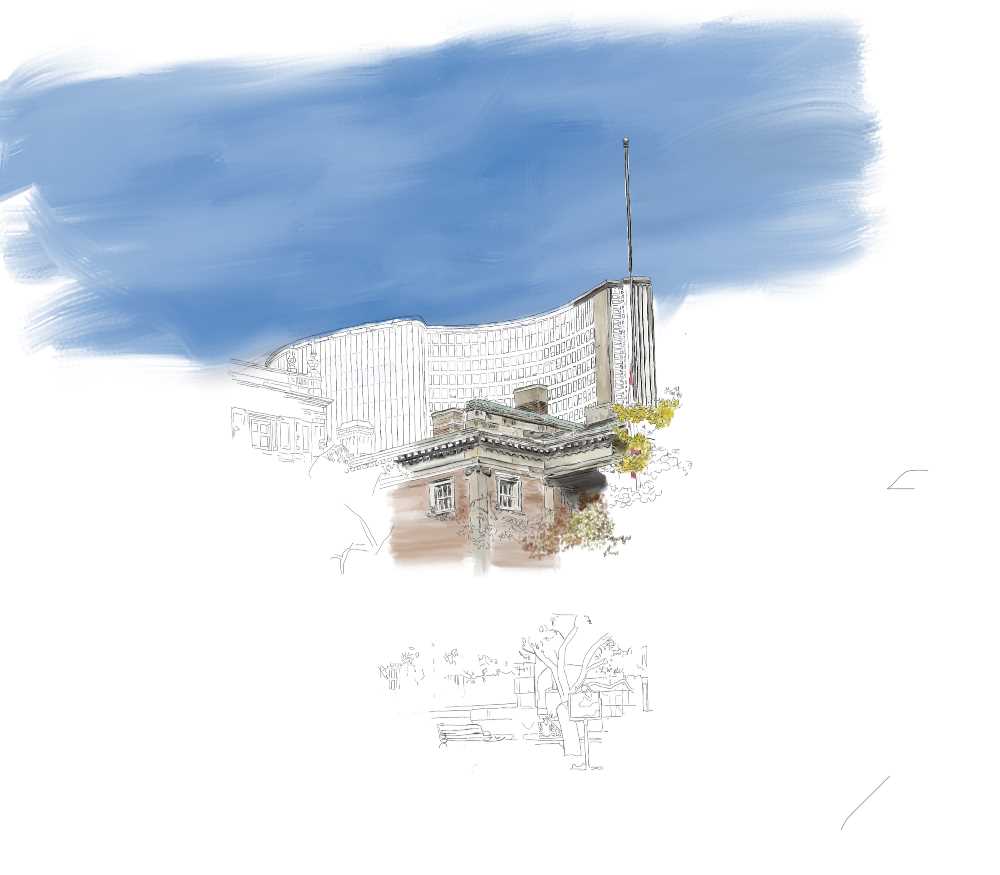 I’m trying for a water colour effect again. That’s something I was never any good at – real water colours. I’m too impatient, which is a weird confession considering I’ll spend hours tinkering with a picture in Photoshop or drawing on paper. Here’s the second draft, without the blue sky.  I turned the layer off on this draft until I fill in some of the building along the top. I’m actually quite pleased with the way the sky worked out though. 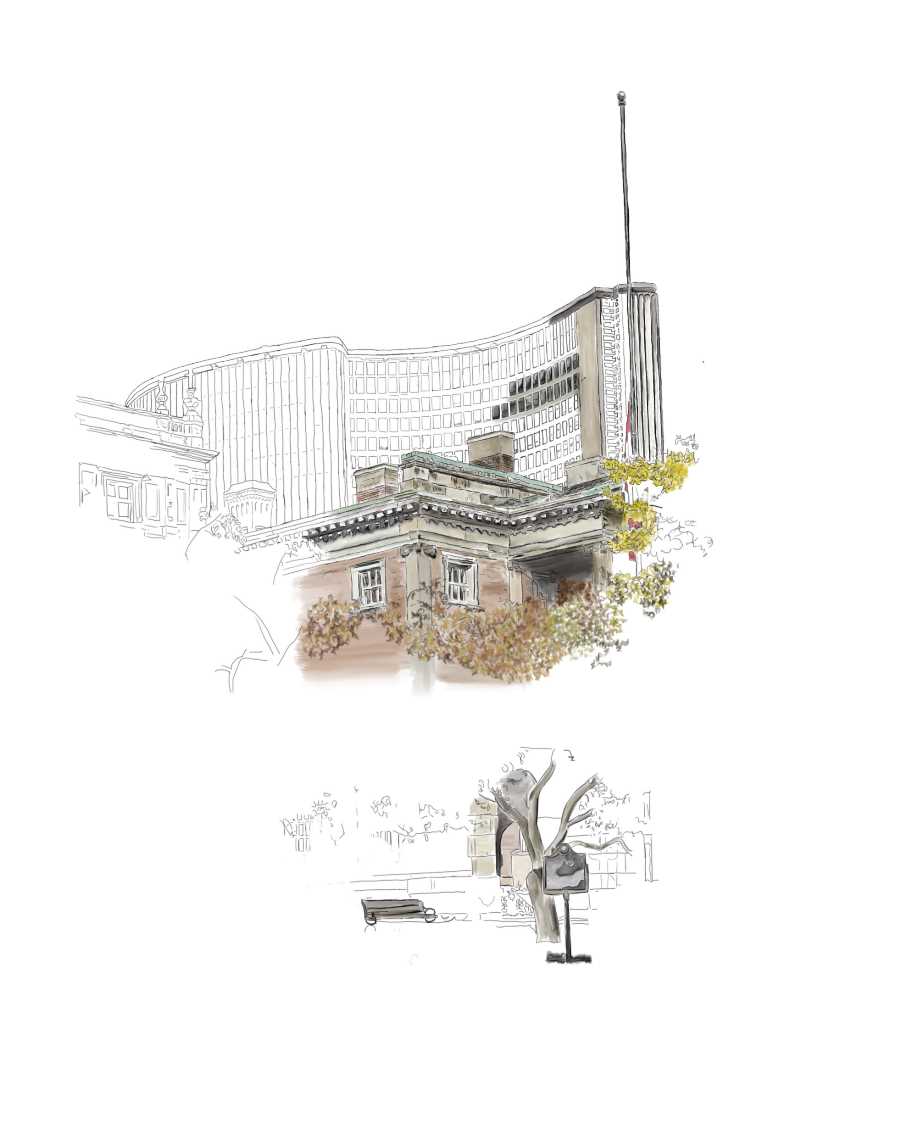 And I’m using layers to add leaves as I go along. Not too sure about the sign, need to go erase that and try it again. That was my first attempt and yea, it looks wonky. So does the tree and bench for that matter. The tree needs more definition and the bench … it has to go. It looks like a drunken carpenter built it.  But the leaves worked spectacularily well. Building them up in layers and then using a light hand on blending seems to be the best method. I turned the undercoat off in this image as well. I’m playing with a couple colours behind the leaves to give it a fuller look. You’ll see that in the next edition.   I stopped for a bit because I realised I need to expand my brush selection. I kept relying on the same 4 brushes and that just won’t do.

Last night I was a bit bored and decided to experiment with some pencil style brushes I downloaded. I spent a rather happy evening adjusting them to a variety of softnesses with erodible points. I think some of the new mixer brushes I’ve set up might be just what’s needed in the above pictures. To experiment with the brushes, I pulled out a pencil drawing I did years ago and decided to give it a go. Yea, I cheated again, I did a rough trace of the outline of my original work and then went free hand the rest of the way. I haven’t gotten the feathers quite right, it will take a lot of practice. They are a lot easier with pencil and paper. 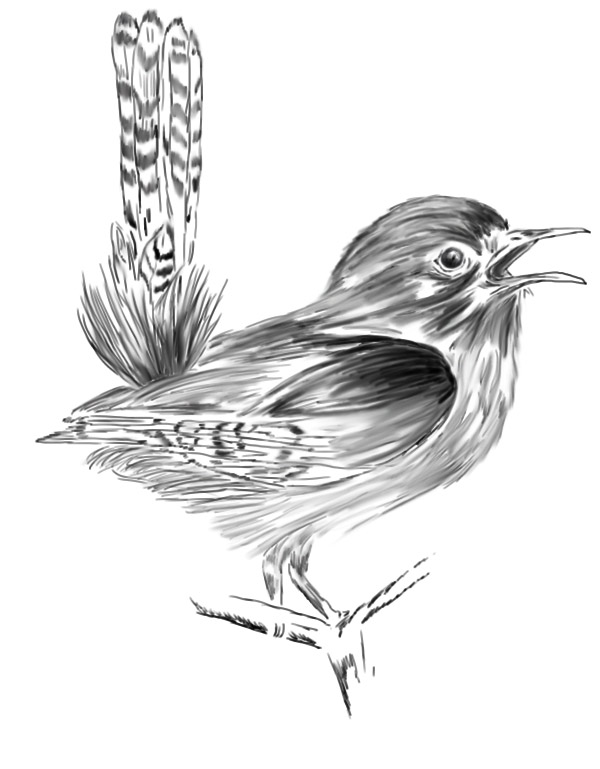 The eye worked out better than I’d hoped. It needs a bit more darkness to give it the liquid look. He does look a little rough around the feathers. I need to go back and use more layers for each series of feathers and shadings. I think I also need a harder pencil – maybe a 2H rather than the softer style, so the details pop. I’ll hammer at it this weekend. Very busy this week and might not have time to play around with it. Oh and it’s a Beswick wren, if you’re curious.