Behold, the terrifying creature Castor canadensis: A very brief look at the Canadian beaver in design.

While flipping through a catalogue for a show at the Thomas Fisher Rare Book Library  (UofT) and I spotted what has to be the single most amusing depiction of a beaver ever created: 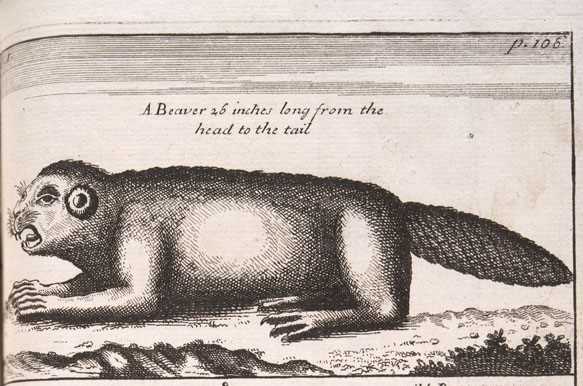 Fearsome, isn’t it?  Baron Louis Armand e Lom d’Arce Lahontan’s beaver looks like it crawled out of a myth – head of a man, body of a dog, legs of a rodent and a pinecone tail. Mean looking too. His works were printed in the early 1700s under the title New voyages to North-America. The second engraving from the Lahontan book doesn’t fair much better. The poor beaver/monster hybrid simply looks exhausted in this engraving: 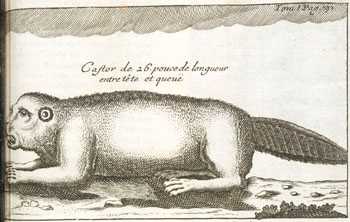 Impressive snarl on that beast, not to mention the awe-inspiring eyebrows. I can’t decide whether the beaver/monster is wearing earrings or if the artist couldn’t decide what type of ears such a creature would have. The lack of webbing on the hind feet convinces me a friend was correct, the artist never saw a real beaver. Or, he was playing to a naïve European audience who would lap up the dangers of hunting the exotic and dangerous animals of North America.

However, those engravings have nothing on an 1685 illustration that reminds me of a game we used to play where you had to draw what someone was describing:

The eyes are a bit haunting and suggests something out of a bestiary of magical creatures.

One of my favourite designs comes courtesy of Sir Sanford Fleming. Canada’s Post Master General asked Sir Sanford to design Canada’s first stamp, and instead of the default Queen Victoria portrait, he created what is arguably one of Canada’s iconic stamps: 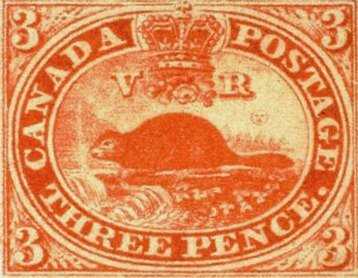 Compared to the mighty beaver in the Lahontan engravings, Fleming’s 1851 depiction is down right benign, but it does look like a beaver. The optics of the little water fall at the beaver’s feet make the creature look the size of a bear when you look at the tiny stamp. Regardless, this is my favourite stamp. I own 7 copies of the later issues and look at them often.  It’s easily the most identifiable stamp in the Canadian catalogue. (read more about the stamp design  –https://bittergrounds.com/canadian-philately-5c-beaver-stamp-some-not-so-tortured-canadian-history/

And speaking of mythology, a wonderfully quirky book, called Castorologia or the History and Traditions of the Canadian Beaver by Horace T. Martin (1892) offers a glimpse into many early engravings and the use of beavers in Canadian imagery, including this flight of fantasy: 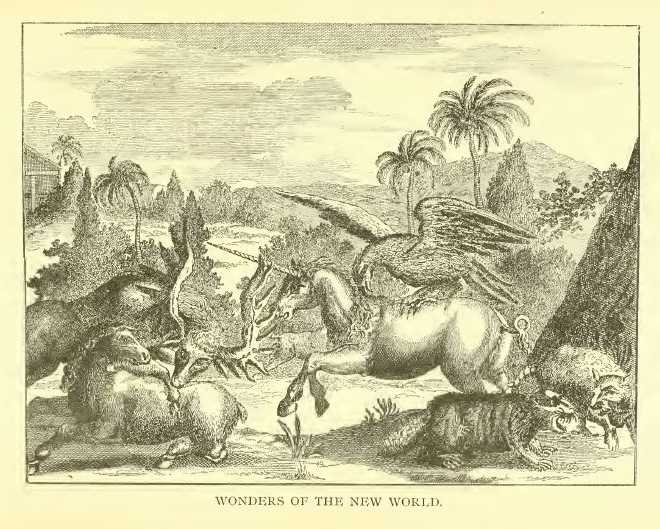 Believe it or not, that beast, bottom right, is a beaver – Canada, home of unicorns and snarling, vicious, pinecone tailed beaver.

Living in Canada, it’s all but impossible to avoid seeing images of beavers. It’s deeply ingrained in our historical psyche and found scattered everywhere in Canadian art, architecture, tea cups, stamps, plates, signage and pretty much anything you can imagine: 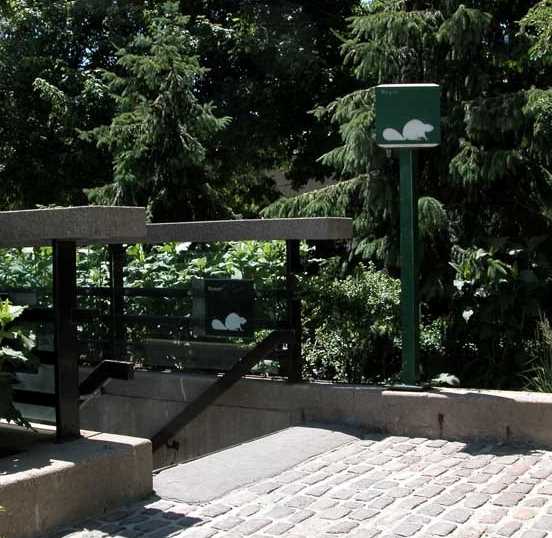 For the record, I have no idea why there were beaver silhouettes posted down at Nathan Phillips Square (downtown Toronto).  But this dashing fellow, found on the Centre Block Parliament Hill makes far more sense. Think of him as a Canadian gargoyle. 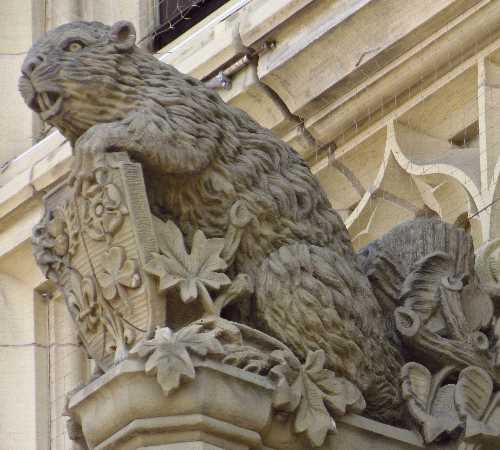 Hands down, the single best use of a beaver is in this early proposal for a Dominion of Canada seal sometime in the 1880s: 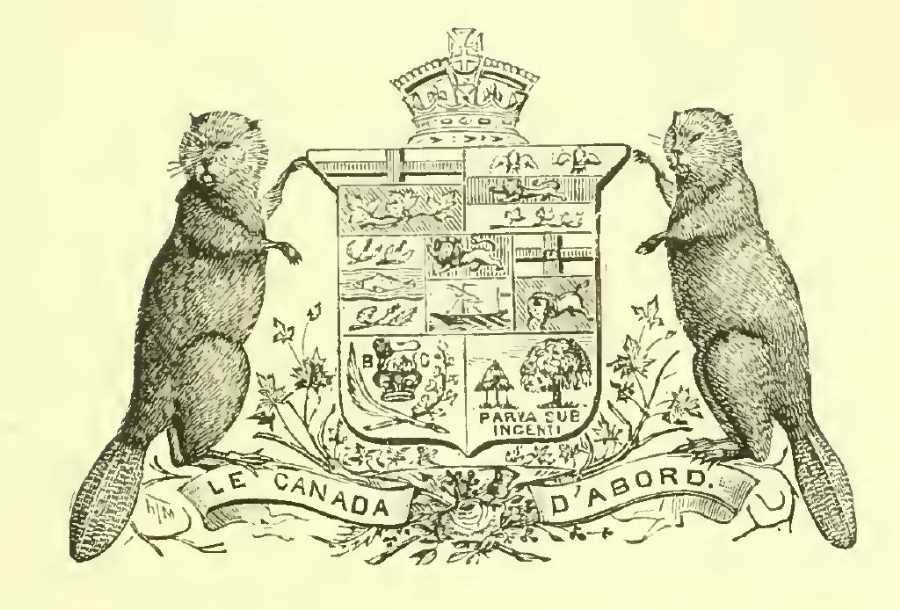 I adore this engraving. So much so, I’m thinking of putting it on a t-shirt. You can find it in the Castorologia book, pg 201. The “rampant” beavers look like they are picking a fight with their “you looking at me” scowl. How awe inspiring is that image! Beavers with attitude.

And speaking of rampant beavers, here’s another example of beavers in Canadian iconography – the Coat of Arms for the city of Toronto: 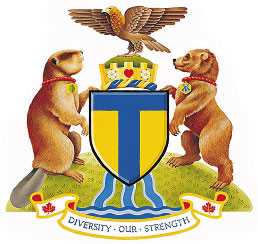 This little offering is relatively new,  created in 1998 when Toronto amalgamated. When I first saw it, I thought it was an early incarnation of Toronto’s CofA.  I’ve never seen it anywhere, except on a few random web pages. I remember the old Coat of Arms rather well, but didn’t realise it had been changed until recently. The beaver is larger and far more intimidating than the poor bear on the right. I think in a cage fight, the beaver would win. The over all image is a bit lacklustre and static, lacking the flair and attitude of the beavers in the previous shield.

Not sure if I can take a “rampant beaver” seriously ever again after seeing this make the rounds on social media: 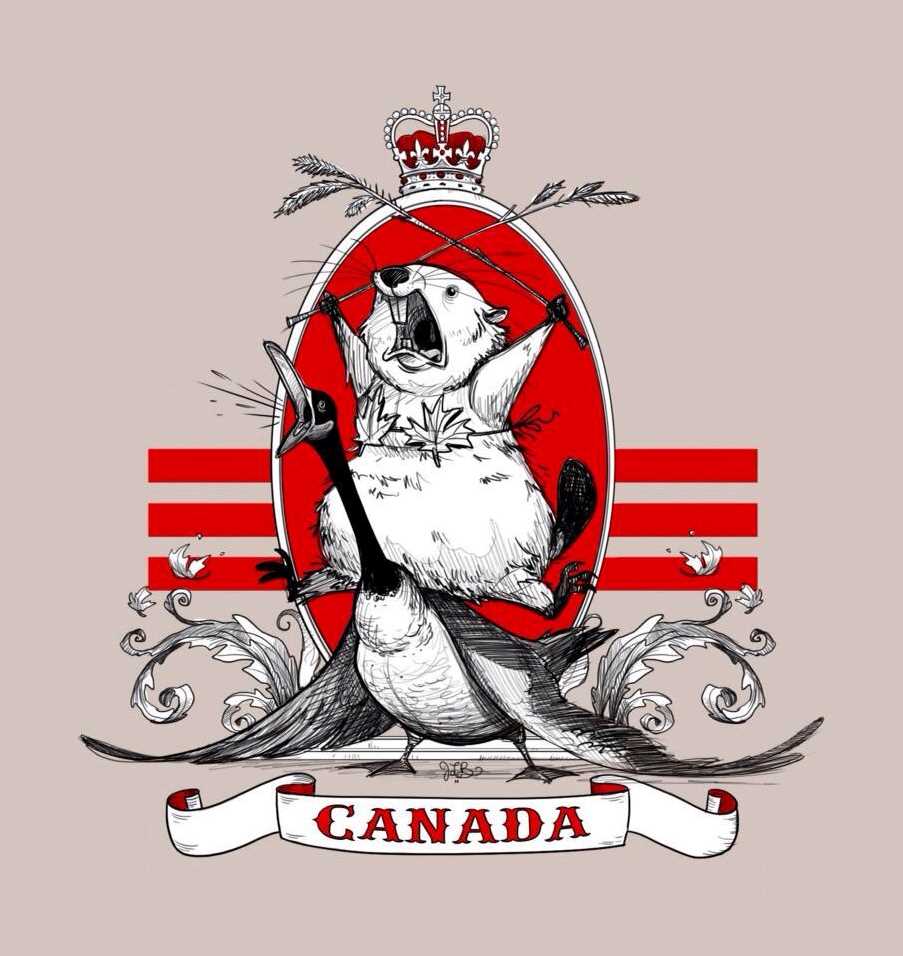 I’ll close out with one last (and less tongue in cheek) look at beavers as Canadian icons: 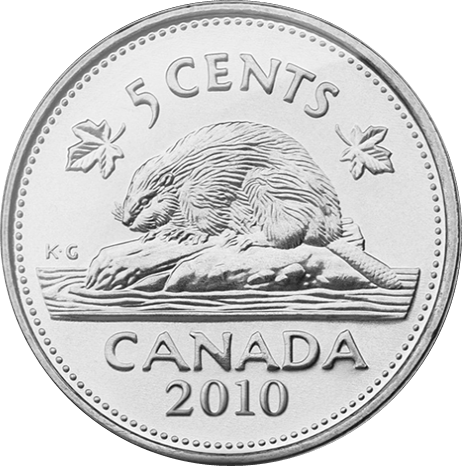 You can download a pdf of Castorologia or the History and Traditions of the Canadian Beaver by Horace T. Martin at Archive.org https://archive.org/details/castorologiaorhi00mart