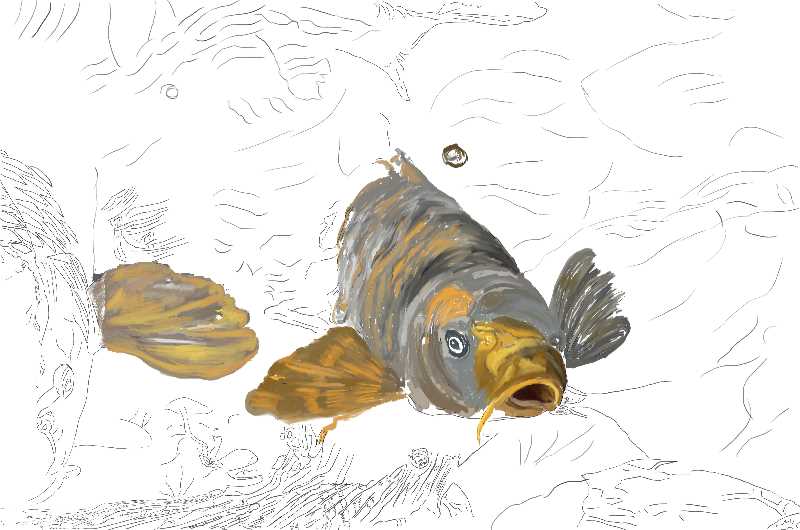 Well, lost the original article in the move over to a new host company, but that’s my oversite. Forgot to do a fresh backup that day. Here’s a reconstruction… sort of.

I wondered what I was going to do with the photo I posted previously. The koi fish pond was enticing, but I struggled a bit with how to approach it. I started the same routine, basic outline, rough out the fish, apply paint effect and started to laugh – this struck me that I was doing an adult version of paint-by-numbers.

I stood back a bit and decided to go for it started to go a bit more freehand. The righthand fin, er fin on the right side of the middle fish was done without outlines as well as much of the pattern on the fish. I was trying for a more flowing look. Right idea, but the blending is heavy handed. The paint effect is far too thick.  I’m struggling with blending brushes. I’ve got the weekend off so I’ll poke around with them, try to set up a new grouping. I need to change effects.  The fish should look like it’s water coloured, not so slathered on acrylics. Maybe turn off buildup. Hmm …

I’m also doing less detail on the overall outline. I’m looking for a more flowing feel to the background. Here it is in all it’s glory:

I was going to delete the work and start fresh but decided “warts ‘n all” was needed. Not happy with it in general, but the mouth and whisker is spot on. Really pleased with the sense of depth.  That’s part of a problem I’ve had for decades when it comes to drawing. Even using pencil and paper, I often can’t remember how I get a certain effect – I just wing it. I don’t think through steps or think about what I’m drawing. I just start and enjoy. So … this weekend I’m sitting down with my notebook and making notes on each brush (especially blending) and the effects. That’s the only way I’ll remember what they do.

Then again, if all else fails, I can start a career as an adult colouring book maker.

What? No construction scenes? Koi pond in Kyoto

Here’s a nice shot. No, I didn’t take it. My friend, Chris took the shot during a trip to Kyoto. He also took the photo of the bridge I posted back in Nov.

I find his photos are thoughtful, composed .. a bit like he is. I was looking through some of his photos, unfiltered, over the holidays and it struck me how he takes a single shot and captures the mood. I take dozens of chaotic, on the fly photos hoping to catch the right image. If I manage to grab the one I wanted I think “cool” and do a happy dance. Not necessarily the best method, but it works for me.

I’m playing around with this with Photoshop, trying to turn it into a bit of digital art. But … I love the photo as it is, so maybe I’ll just leave it alone.