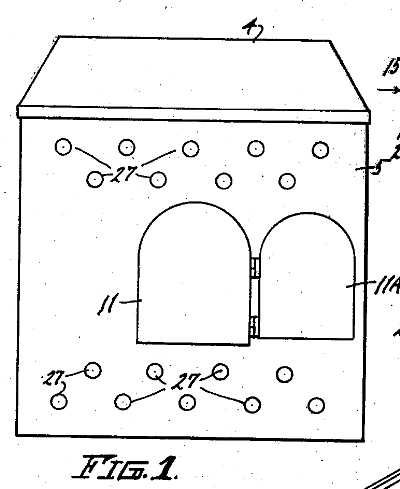 You knew I’d get around to litter boxes eventually

You just knew I was going to get around to litter boxes eventually, didn’t you? It was inevitable I’d start poking around patent archives to see what was out there. Colour me surprised – there are a LOT of patents for various cat litterbox designs. Everything from fully collapsible to pretty little houses for the fussy cat owner. It’s impressive how much brain power has gone into the basic concept of a litterbox.

Sheridan H. Kramer, of St. Paul, Minn envisioned a litter box that attached to the building’s plumbing, was portable and could act as sleeping quarters for either a cat or small dog. Kramer had apartment dwellers in mind, hoping such a device would convince landlords to allow pets because the issue of sanitation would be addressed.

The design is interesting. The cat enters through a doorway into compartment A, which is designated as a sleeping area. Compartment B, the toilet tray, is accessed via a small opening from A. When the cat walks from B back to A, a small lever on the doorway floor is tripped by the cat’s weight and flushes the toilet.

Compartment B has a water tank that hooks into the apartment’s plumbing. The tray connects to the building’s sewage outtake for quick disposal. Figure 3 (image below) shows how the door lever is connected to the tank. The animal’s weight triggers the lever, which is attached to the tank handle. Water fills the tray and drains away through a series of holes under the tank (hard to see, but look for 26A in the image). The tray itself is on an incline so the water will flow towards the holes. When the cat steps off the door lever, the handle pops back into the up position and the water stops flowing. The tank will fill itself again and the tray will drain. 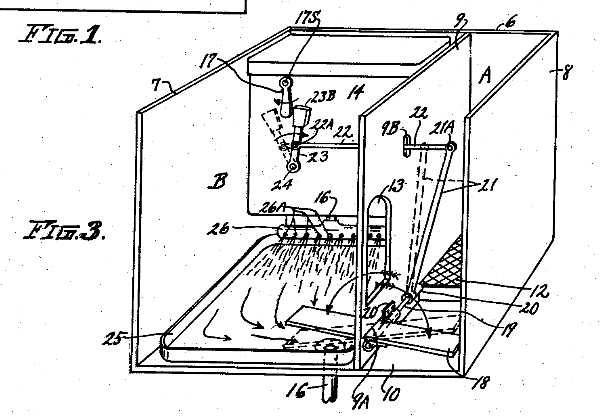 If you look at figure 1, the one with the door, you’ll see a bunch of holes in the front panel. Those are air vents. The front door closes, in case you want to keep the cat or dog in one place.

On one level, it’s brilliant. No cleaning required. On another, not so practical. Installation would require permission from the landlord, which I doubt would be forthcoming. I tried to figure out a simple way of doing it, but nothing short of having a plumber come and refit a couple of pipes would work. It’s not like there’s are in/out pipes hanging around ready to be plugged into, especially at floor level. Not many landlords would be keen on this expense. Kramer did design this with portability in mind so you could hand fill the water tank, but that would quickly turn into a pain. And you’re still faced with flushing – where would water and feces go. As far as portability goes, this box would be heavy and not what I’d consider portable.

The other primary issue centres around the fact cats can be real assholes. Sure they like to crawl into small places, but have you ever tried forcing a cat to get into a small carrier? Battle armour and bazookas are the order of the day. Training a cat to use the tray could be a nightmare. Kramer admits in the patent, the animal may have to be locked into the box to force it to use the toilet tray. Some cats might train to use it, but most? Not a hope it’s going to happen.

Another issue comes to mind. Cats don’t like surprises. The flushing would send many cats into a frenzy to get away, especially if they are half way through the door and the water comes flooding in and soaks their paws. If you have the door shut, the cat would go into full panic mode and quite possibly never enter the box again. Think I’m exaggerating? Just cruise Youtube for videos of cats shocked by cucumbers on the floor (and please don’t do this to your cat, it’s cruel and rather stupid). They don’t do well with shock and awe tactics if they are the target.

If you manage to train your cat to use the box, you might find your water bill going through the roof. Imagine coming home to find out your furry friend decided to sleep on the door lever. Or they ignore compartment B and use A as their toilet.

Too many impracticalities likely killed the idea.