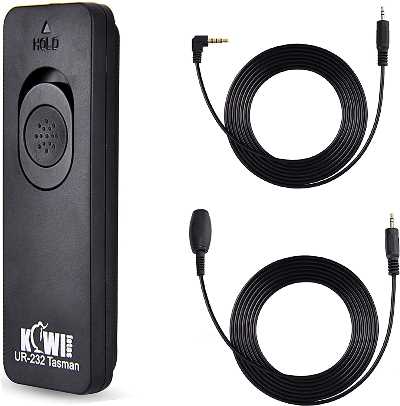 Past attempts at taking sharp night photos have been mediocre. Occasionally, a photo stands out, but that’s due to luck rather than skill on my part. And no, I’m not being modest. This is an area I struggle with. For the past couple of months, I occasionally trotted out to the balcony and tried figuring out what I’m doing wrong. Last month I admitted a large part of the issue is impatience and shaky hands. I get fidgety and do dumb things when frustrated. Dumb things like doing the same thing over and over or not waiting to get the effect I want.

Impatience is a night photo killer

It takes a lot of trial and error to get a good night photo. It also means paying attention to settings and making notes on what works. I’m a bit lazy and found myself repeating the same mistakes rather than reading past entries. I was chasing longer exposure times to get a certain effect but would often lift my finger off the button too soon. Or worse, my hand would shake just enough to create a blurry image. I decided to tackle these problems with a remote trigger.

Canon has an app that can be used to trigger the camera. While it works, it had a horrible lag time between shots. I’ve tried it on two Android smartphones and encountered the same problems. It also caused the camera to lock up occasionally, so I didn’t really use it much.  It is handy to scroll through photos on the camera and look at the details via the phone, but to act as a trigger, it wasn’t particularly good. You can check it out here Canon Camera Connect | Camera and Camcorder App. You might have more luck than I had.

I picked up a cheap little remote clicker to test. It cost all of $15 so I figured it was worth the try. It solved the lag issue as well as cleared up some of my impatience. To set up a long shutter speed shot, all I have to do is flick the button up to hold and the camera shutter stays open until I’m flick it back down.

I experimented with various shutter speeds and had more fun that a person should have with a little plastic clicker. It also cleared up the shake issue. Despite using a good tripod, I still managed to pick up a vibration on the photos when my hand remained on the camera button. This little clicker fixed it.

First of the night photos of the north skyline 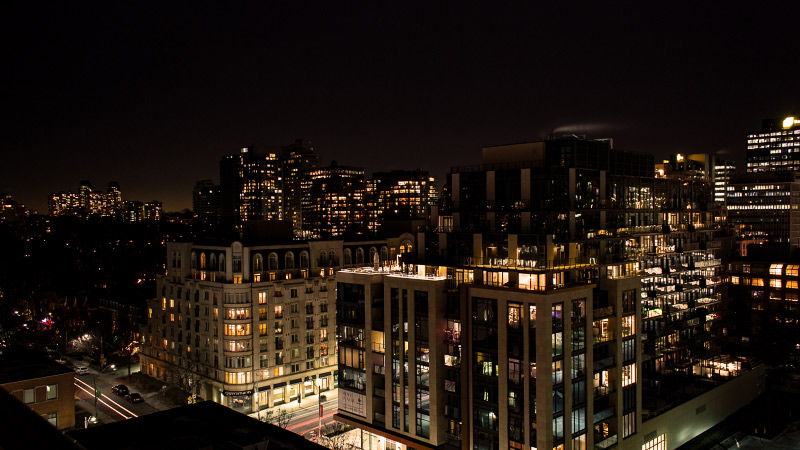 I’m pleased with the clarity

Now that’s a good photo. I especially loved the car lights below on the street. The building lights came out warmer than any previous photos. Not sure That’s a combo of no hand jitter and a longer shutter speed. The skyline came out just about right. I’m going to lug the tripod and camera out to the parking garage roof to try a few new ideas this week. It’s supposed to be clear tomorrow, but we’ll see. Mother Nature doesn’t always cooperate. 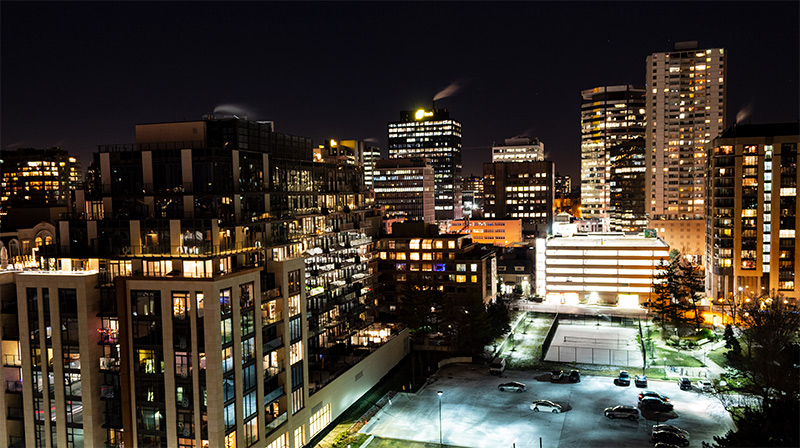 Left the shutter open too long this time.

I like this one because it’s an interesting combo of warm lights and chilly winter scenery. But I left the shutter open a bit too long and the parking garage is washed out. The reflections in the building on the left are great thought. They really shine.

Last photo of the Toronto skyline 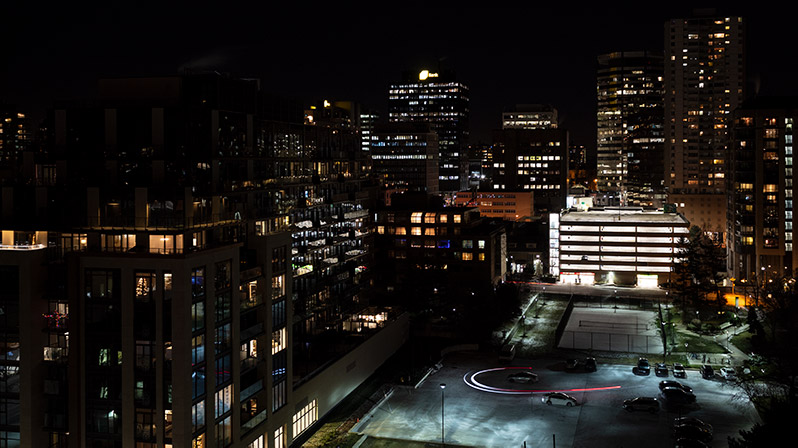 The car lights were an accident

This one came out better. I didn’t hold the trigger so long and accidently got a car pulling out of the parking lot at the same time. That arc of white to red lights was a happy instance. I stayed on the balcony a bit longer trying to get a few more cool car light effects, but my neighbours weren’t cooperating. But this gives me hope.

I had plateaued for quite a time with photography and was feeling frustrated. As I said earlier, I kept repeating the same mistakes and couldn’t seem to shake it off. But something as small as a $15 remote trigger seems to have invigorated me. Now I can’t wait for a night to go out and try different views.

If you’re interested in seeing some of my earlier attempts, take a look at the article below.

An interesting view of concrete and light – a little night photography