How’s this for a piece of cool technology, the Robertson Screw?

How many of us have cursed the traditional flathead screwdriver- usually that nanosecond you feel it slip in the groove and you know you’re about to suffer a disgustingly, ugly hand wound. Or cursed the Philips screw because the little star shape became damaged when the driver slipped.  There have been many attempts at improving the basic screw and my favourite is a Canadian innovation.

Development of the Robertson screw 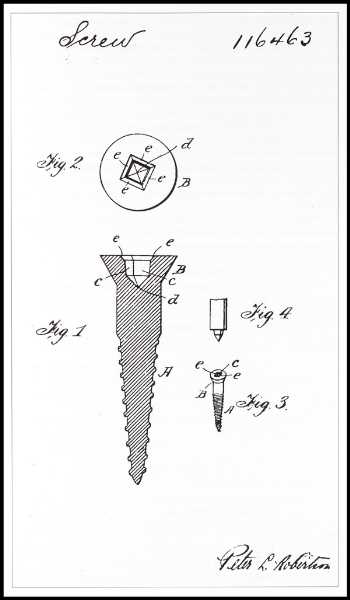 Patent illustration of Robertson Screw @1908Why is this a great example of tech at work? The design improves on an old idea – slip a screwdriver into the snug little square head and you can get an amazing amount of power behind it. Well, plus, for people like me who are a menace around power tools of all sorts, you never run the risk of the drill winging off creating embarrassing divots along the woodwork. There is a reason I don’t do home repairs.  But I’ll leave that for another tale. 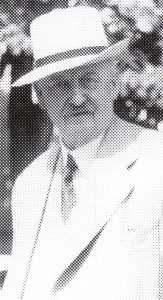 Peter Lymburner Robertson is one of those underappreciated Canadian inventors who built a small empire a one small screw. Although many are familiar with the square head screw (commonly referred to as a Robertson), few associate it with the man who invented it. That’s him over at the side. Robertson was living in Hamilton, Ontario and worked as a travelling salesman for a Philadelphia tool company.  He often related a tale of how and why he invented the square screw. Robertson was demonstrating a spring loaded screwdriver in the summer of 1907 (the date varies between 1906 and 1907, depending on which source you look at) when it slipped and he received a bad slice on his hand. After that, he began designing a slip-less screwdriver. Withing a year, he had a satisfactory design and filed for a patent in Canada. By 1912, he held the patent internationally.

The simplicity in the design is awe inspiring:

This invention relates to screws, the heads of which have axial driving recesses or cavities instead of transverse slots punched therein and the invention consists in a recess or cavity extending into the screw head, the outer portion of the recess or cavity being prismatic and the inner portion thereof being pyramidal, the apex of the pyramid being in the axial line of the prism and of the screw. (from patent papers)

In short, the screw slot is square and punched deep into the screw head rather than a slot running the length of the screw. What makes this screw so much better than a slotted one?  Plop the screwdriver into the recessed square and it’s gripped tightly with nowhere really to slip off. You can start turning with no fear of it popping out. As well, the grip is so solid, you can put a lot of force behind each turn of the screw. The square shape also makes for a much hardier screw and more difficult to strip. As well, because the screwdriver fits so snugly into the square head, it’s possible to drill the screw with one hand, adding to its overall utility. 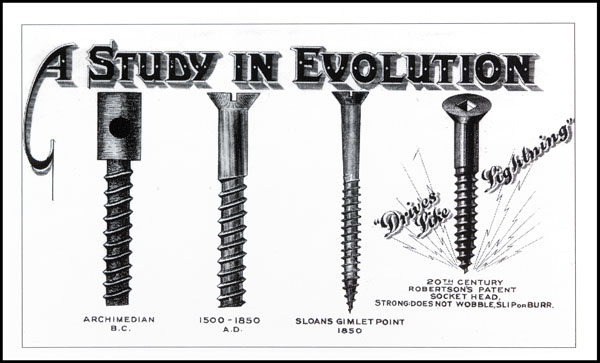 This was an important innovation, especially with industries looking to save time and money – a screw that could be inserted faster saved big dollars. It’s a bit hard to believe, but consider this, fewer slips of the screwdriver meant less damage to the item being manufactured. A win, win situation.

After WW1, the Ford Motor Co initially used the Robertson on its Model T and A cars. By using the Robertson, Ford said his company could save an average 2 hrs assembly time on each vehicle. This presented a massive advantage in both savings and getting cars to market faster. The deal to use the Robertson fell apart when Ford wanted P.L. Robertson to sign an agreement that would allow Ford to make and hold all distribution rights for the huge US market. Robertson was averse to signing a deal that potentially meant he would lose control over his invention.  Robertson refused to turn any rights over and unfortunately, when no monopoly was forthcoming, Ford switched over to the Philips screw. Philips was more than happy to hand over the rights.  In an odd twist of fate, this failed deal meant the Robertson never really took hold in the US, but it’s ubiquitous here in Canada. I doubt there are many toolboxes that don’t have a few Robertson screw drivers rolling around inside.

Archives Canada – Robertson Screw and Screwdriver
You can download the patent here: https://patents.google.com/patent/US975285A/en?q=screw,roberston&inventor=Peter+Robertson&before=19100101
Robertson Fastener website has a bit of info as well