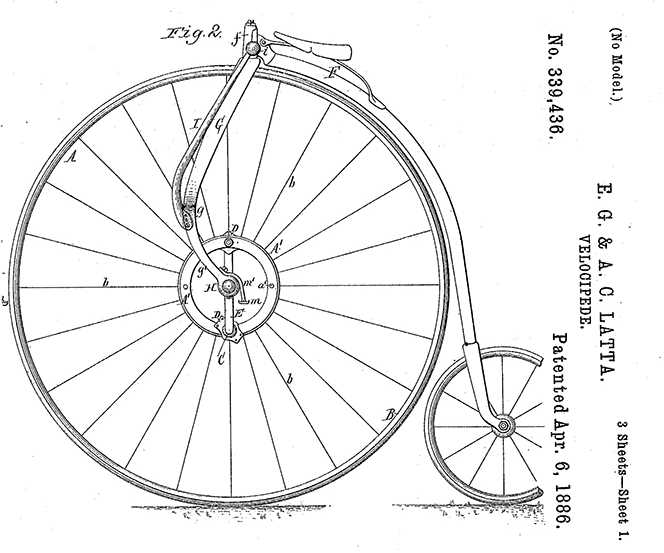 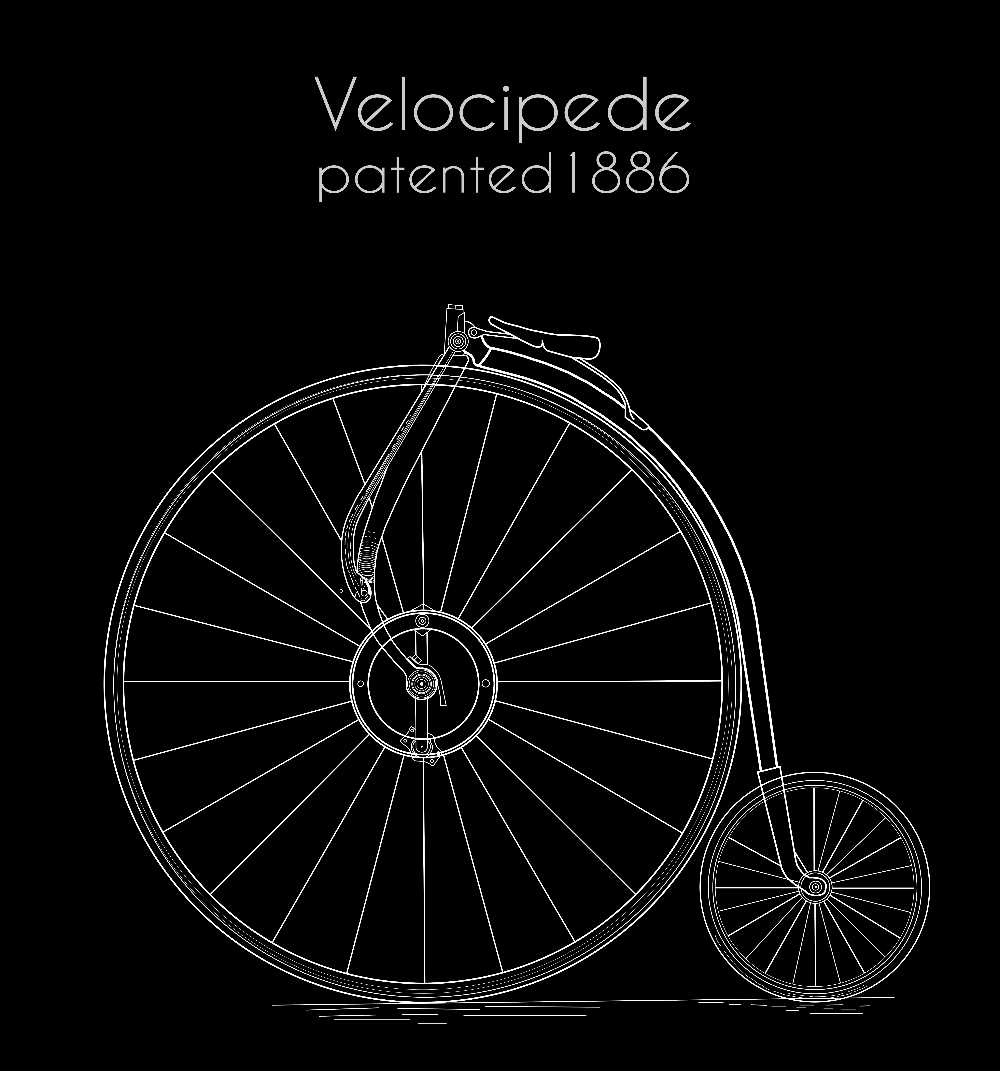 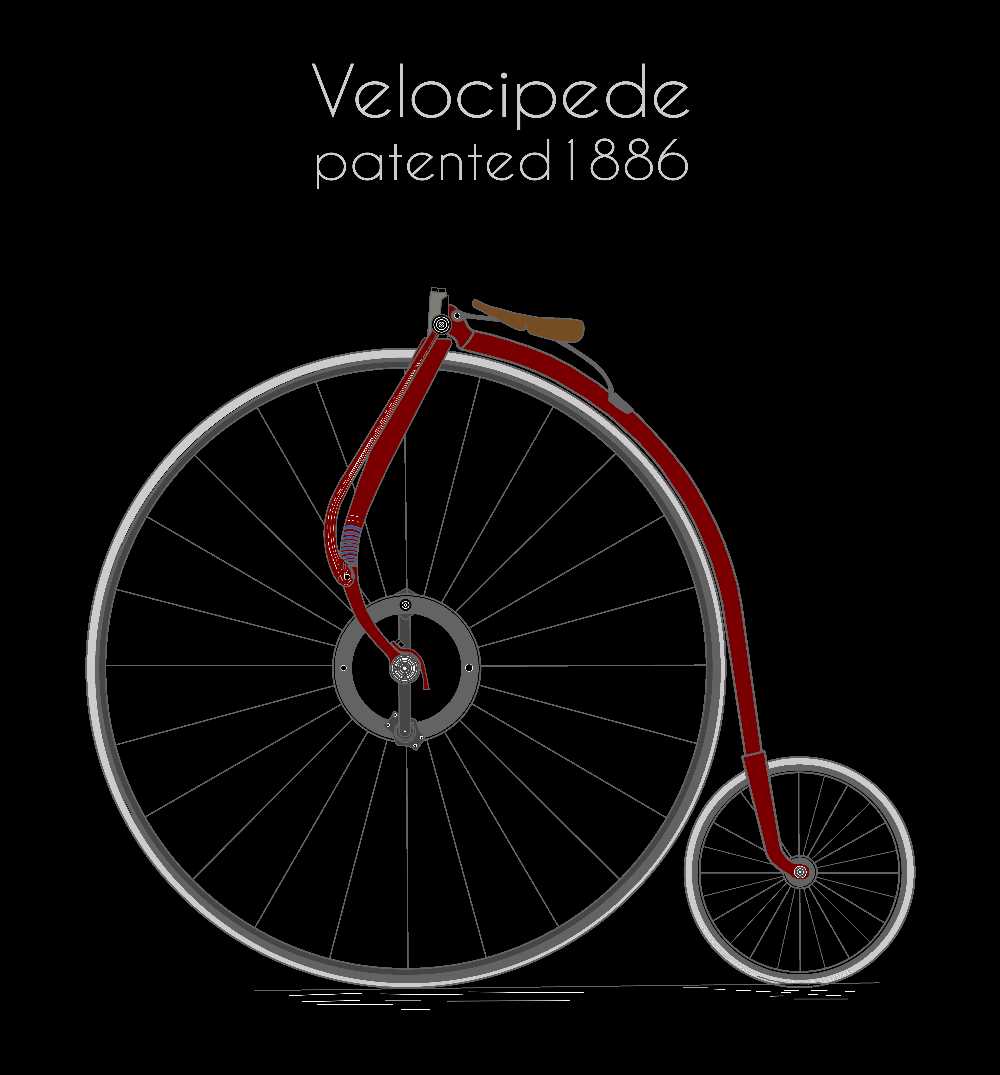 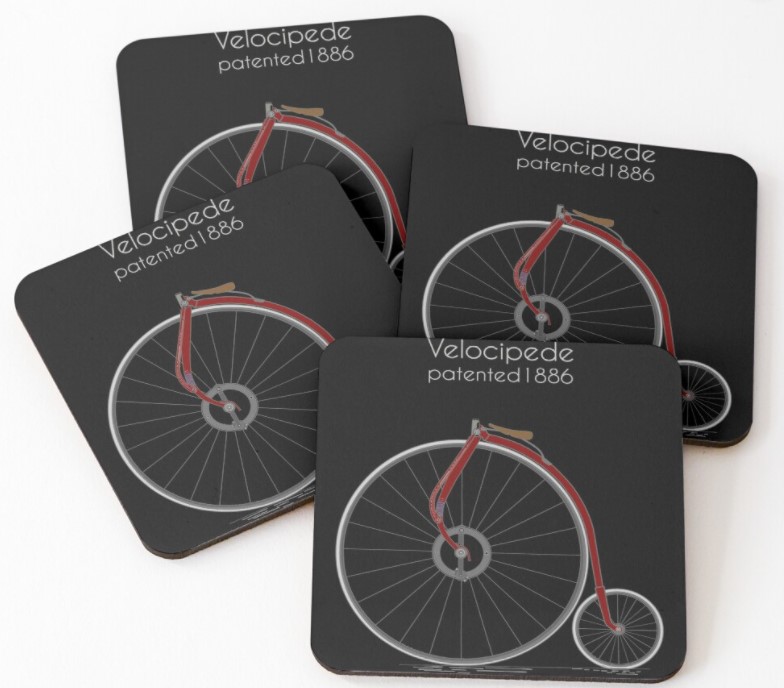 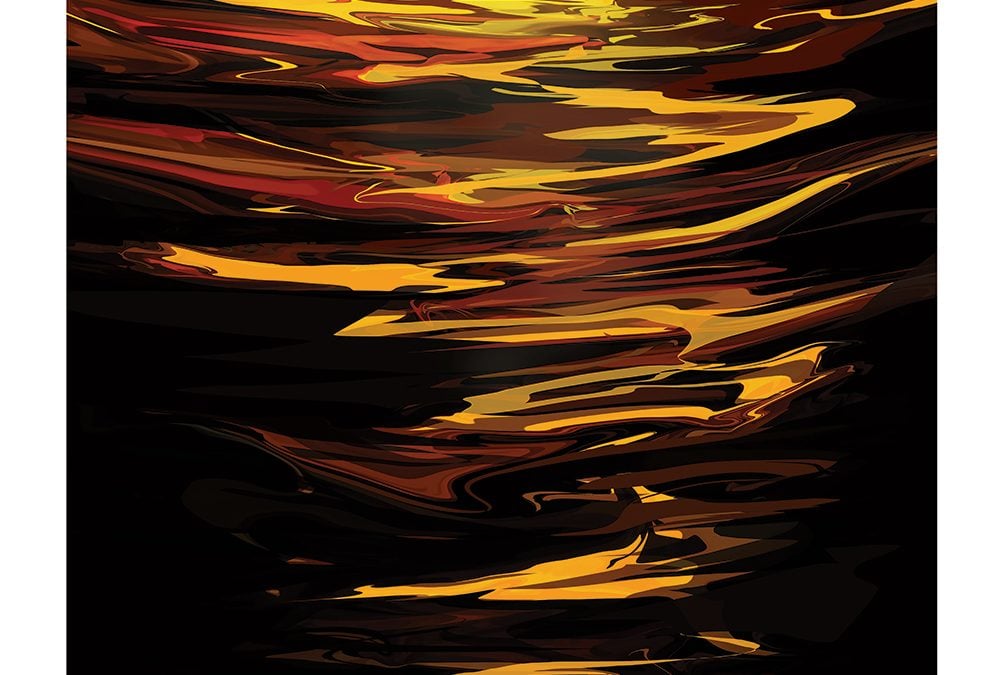 Did you know NASA created travel posters? I didn’t until today.  Check out the artwork created by the Jet Propulsion Lab team. The hi-rez  “Visions of the Future” series is available to download in pdf and tiff format. And they are HUGE. 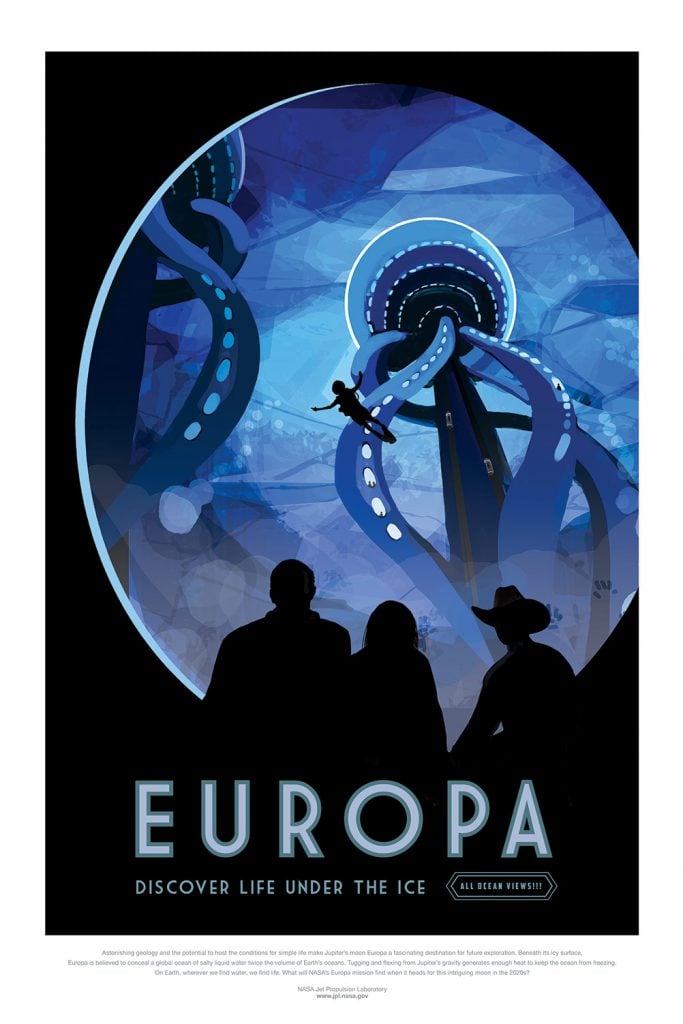 They print out @ 30″ x 20″, so you might need to trot down to the local print house to make a poster sized copy, but, the quality is worth it. Of course you can always shrink them down, but the posters deserve a full size printing and framing. The series also makes kickass wallpaper, by the way.  Under each poster is a small write up about the planet and NASA’s work regarding it.

Astonishing geology and the potential to host the conditions for simple life make Jupiter’s moon Europa a fascinating destination for future exploration. Beneath its icy surface, Europa is believed to conceal a global ocean of salty liquid water twice the volume of Earth’s oceans. Tugging and flexing from Jupiter’s gravity generates enough heat to keep the ocean from freezing.
On Earth, wherever we find water, we find life. What will NASA’s Europa mission find when it heads for this intriguing moon in the 2020s?
NASA Jet Propulsion Laboratory
www.jpl.nasa.gov 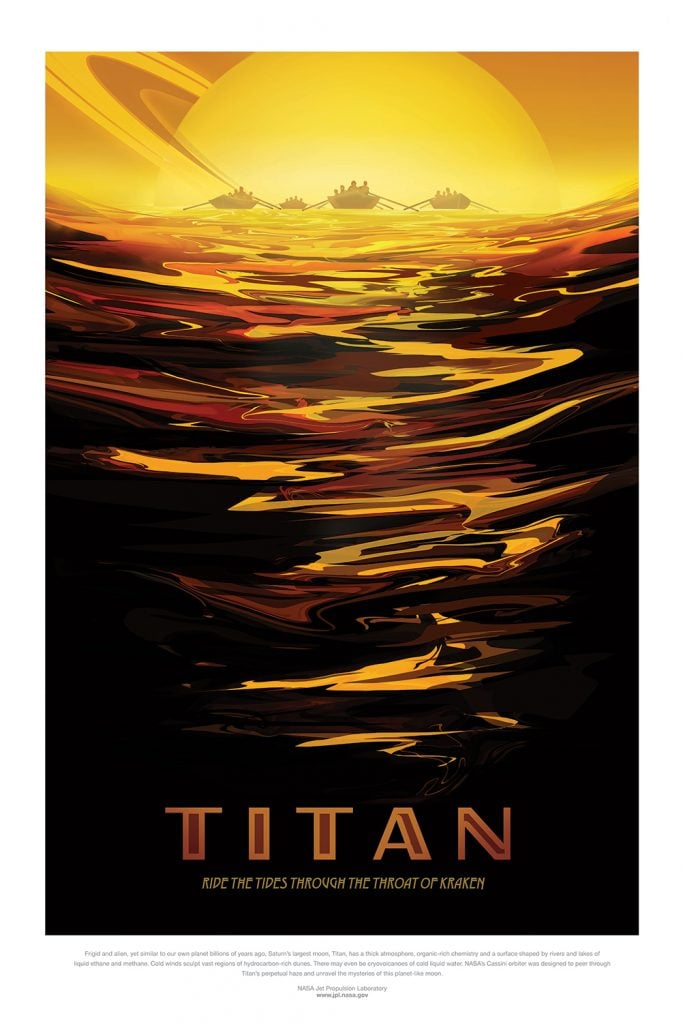 Visit Titan and be awed!

Frigid and alien, yet similar to our own planet billions of years ago, Saturn’s largest moon, Titan, has a thick atmosphere, organic-rich chemistry and a surface shaped by rivers and lakes of liquid ethane and methane. Cold winds sculpt vast regions of hydrocarbon-rich dunes. There may even be cryovolcanoes of cold liquid water. NASA’s Cassini orbiter was designed to peer through Titan’s perpetual haze and unravel the mysteries of this planet-like moon.
NASA Jet Propulsion Laboratory
www.jpl.nasa.gov

There are 15 in the series, and again, free to download and enjoy.  An absolute must is a visit to the “learn more” page to see the thinking involved in the creation process.  They have a great retro, 1950s  feel to them. The colours, design and content made me immediately flash onto my all time favourite sci fi movie  Forbidden Planet (1956) and travel posters of the era.  Turns out there’s a reason: “As for the style, we gravitated to the style of the old posters the WPA created for the national parks. There’s a nostalgia for that era that just feels good. David Delgado, creative strategy”.

See what I mean – colours, style, fonts and concept certainly evoke the era.  It would have been amazing to sit in on the creative process.  Check out all the posters at NASA’s Jet Propulsion Lab’s Vision of the Future page – https://www.jpl.nasa.gov/visions-of-the-future/ You can download individual posters (each about 200megs in size) or download all of them at once.

Poster design 2 – pushing myself out of the same old rut

I’m thinking of creating a new sub-category for the Photo Log -> Art & Design or Exploring Art & Typography. Not sure yet, it depends on how frisky I get.  I’ve been looking over my attempts at design and decided to try and push myself out of the same old / same old pattern. I tend to gravitate toward textured backgrounds and deep browns way too much.  So …. here’s my second kick at the can:

I wanted something that has a fairly generic urban feel. The view is Yonge Street in Toronto, south facing. The CN Tower is off to the right, hidden behind the buildings.  The photo itself isn’t anything to write home about, but I liked the overall feel to it.  The previous poster was pretty good, but too derivitive of something else I’d done for a customer. Nice poster, but didn’t really push myself to learn a new technique or try a different approach. I spent the last 3 or 4 days evaluating fonts for different uses along with expanding the colour palette stored in my brain.  I had an embrassing amount of fun creating a series of retro feeling headers. It’s an interesting exercise matching fonts to colour schemes. The dreaded 1970s avocado green was the most difficult, but with the right contrasting colours to balance it, I was pleasantly surprised at how well it works.

Anyhow… I digress as usual. The scene in the photo is Yonge Street, south of Pleasant Blvd on the little cusp of a hill leading to Summerhill. It’s a bland little photo but popped alive with NIK’s Color Efex Pro filter Bleached Portrait. I didn’t tweak the filter at all, just left it as NIK made it. I like the sense of space this photo gives far more than the previous photo.

The main font is HWT Unit Gothic by the Hamilton Wood Foundation1. For the tagline and address I switched over to Adobe’s Chaperral Pro. It plays well with the tall, condensed feeling of HWT and makes the web address very readable.

Overall a nicely balanced effort. It has the urban feel I was trying for in the last try, without all the over complicated fussing. When I finish playing with the retro headers I’ll pop them up.