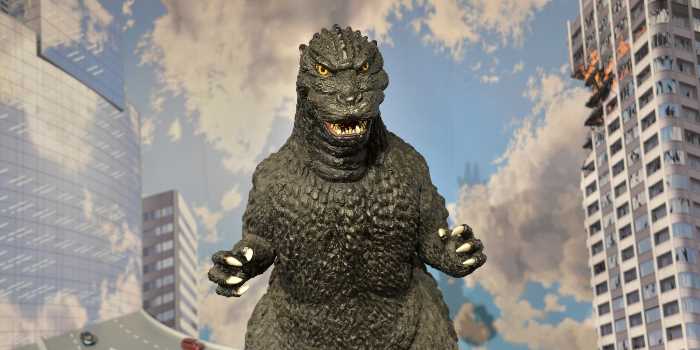 Can we calculate the pressure of the average Godzilla foot stomp?

Godzilla coming to a city near you!

I spent two-thirds of the day sitting around waiting for the next appointment … then sitting around waiting some more. Cooling your heels, waiting for shit to happen is far more tiring than actual work. I seem to be doing a lot of that lately. Waiting, waiting and more waiting. So while I was testing out which chairs were the most comfortable (why yes, I did spend about 40 min playing musical chairs) and driving people around me a little loopy with my constant shuffling about, I began to wonder what it would be like if Godzilla came stomping through the city.

Since I was 2 floors below ground at the time, I figured not much would happen to me, aside from the utter shock of having Godzilla ransack Toronto. While there is an atrium that looks straight up, we could take cover, away from the open area. Lots of hallways leading away from the lounge area. If we avoided the middle, we’d be pretty safe.

Then again, the average foot stomp of an irradiated, mutant lizard might exert enough pressure to cave the entire ceiling in. First, he’d have to knock the 18-story building to the ground. A couple swipes with his tail would destabilise the structure quite nicely. The building is wide, old, and damned solid, so I figured about 3 tail blows would turn the building into a giant Jenga building. If Godzilla was fighting say, Mothra, once the two started wresting each other, the building would come down in 15 minutes. If Mothra flapped her giant wings hard enough, the building would be toast in less than 5 minutes from the sonic blasts.

Godzilla and the wreckage 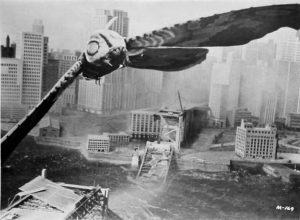 I prefer Mothra to Godzilla

Once the building was falling, we’d have a lot of wreckage tumbling down, but, as I said, the building is substantial so theoretically we might have a chance. That would depend on how much pressure per square inch one Godzilla sized foot stomp exerts.

We’d be safe from Mothra. She’d be useless once the building was covered in rubble. Our safety hinges on GPPSI (Godzilla Pressure Per Square Inch). The building sub-basements are like bunkers, and we could always flee to the third sub-basement floor. All the movies show Godzilla wreaking havoc above ground, none show damage to basements, we should be ok. And for the record, the American remake of Godzilla, set in NYC doesn’t count. That wasn’t Godzilla, just another Hollywood wannabe.

Then I started to worry about another factor. What if the military tried to intervene? We’d have a seriously pissed off monster trying to stomp the soldiers into the ground. And then we’d have rocket launchers, missiles, bombing runs, tanks and everything else up top all banging away at a moving target. Regardless of GPPSI, enough stomping would eventually weaken the building structure.

But what about Mothra?

It was time to rethink the Mothra part of the equation. The sonic waves from her wings might be just enough to create greater tremors, enough to cave in the entire structure. Unless either Godzilla or the military brought her down quickly, we didn’t stand a chance. We’d have to come up with a theory to measure the pressure from each sonic blast, something like the GPPSI. A serious chat with an earthquake specialist might supply a formula.

Then I was back to “will we be safe here” question. I got up and looked around the floor for a vaulted ceiling or arched way, thinking that might supply a bit more of a safety factor. Nope … none. Just standard doorways.  At that time, I noticed yet another potential problem – the elevators. They aren’t built into the wall shafts, like traditional ones. They are designed so you can watch them, from the atrium, go up and down. The cables! What if the cables all snapped? We’d have huge ass cables whipping around smiting everything in their path … We are deeply, permanently screwed.

… and about then the person I was waiting for came out and I went home. Next time I won’t forget to take a book with me.