The magnificent cork stamp from Portugal

How much time do you spend thinking about the little stopper in wine bottles?  Most of us don’t think about it, beyond the fact it’s keeping our wine in the bottle.

cork oak lives between 150 to 250 years and grows up to 65ft high. It’s the bark off the tree that is used to produce cork. Once the trees hit maturity at 25 years, the bark is peeled off the tree every 10 years or so (between 9 and 12 years, depending on the tree).

The ancient Egyptians, Greeks and the Romans used cork for a number of purposes, including building, insulation and of course as a stopper for olive oil bottles. Archeologist in France have uncovered wine amphora with cork stoppers dating back to 3rd BC., with the wine still inside.

Check out Amorim for more information on cork. They have an excellent site filled with information.  Their description of the harvesting is worth checking out: “The removal of the planks makes a dry noise, reminiscent of the gentle creaking of a door, the sound of a cork passing through the bottleneck. A particularly characteristic aroma fills the air, which is slightly sweet … “ 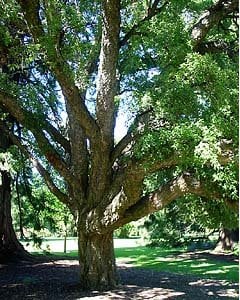 When Portuguese and Spanish sailors set out to explore the world, they used cork oak in some of the ship construction. When French monk Dom Pérignon began producing wine, he used cork, instead of the more commonly used wood, to seal the bottles of wine from the monastery production in the 1670s.  Not long after that, Portugal became a centre of cork wine stopper production. Here’s more trivia: according to Eden Project website, one tree can produce enough cork for 4,000 wine bottles.

Cork should be considered one of those wonder products, but people tend to think of it only in terms of wine bottle stoppers. It’s eco-friendly, sustainable and acts as both a natural fire stopper and insulation. Cork is so flexible it can also be turned into shoe soles, cores for baseball and cricket bats, friction lining, flooring, bowls, and fashionable handbags. Mother Nature threw ina bonus – it’s biodegradable and fully renewable.

Which brings me to the reason cork is the focus of an article about stamps … cork makes kickass stamps: 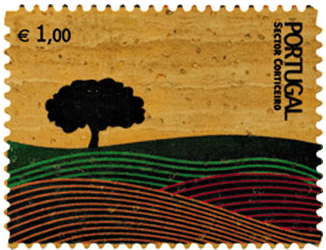 Portugal – stamp made of cork

In 2007, the Portuguese post office (Correios de Portugal) issued a stunning, graceful stamp made of cork. The self-adhesive is unique for a couple of reasons – it was the first time a postage stamp was printed on cork and each stamp is unique because of the nature of cork bark. Portuguese engraver João Machado’s design shows a cork oak on a hillside, highlighting the cork grain pattern in each stamp. I suspect a person could spend years collecting these stamps for the variety in the grain in the background.

Non sequitur: I have to say, I think Correios de Portugal has the best logo in the world.

230,000 stamps were issued Nov 28, and the stamp sold out. It wasn’t just the uniqueness of the material used; people were taken by Machado’s beautiful design. The stamp, unveiled at the Assembly of the Republic, was accompanied by first day covers and leaflet with the stamp attached as part of a stamp presentation pack that sold for 4.25€. 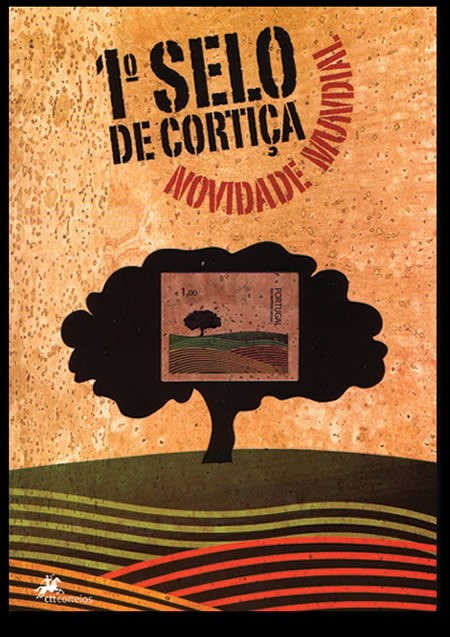 Some stamps were issued with a special AMORIM markings: 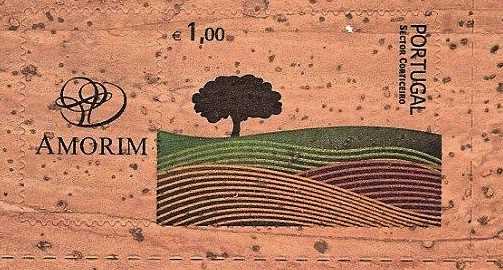 If you were one of the smart ones who purchased a mini sheet of them, you made a wise investment. I’ve seen them sell for $600 per sheet. A full sheet (not the mini) goes for about $80. You can find singles on eBay and other auction sites for about $5 a pop.

After doing research on cork and the 2007, I’m now determined to acquire the stamps. The opportunity to collect variations is too tempting to resist. 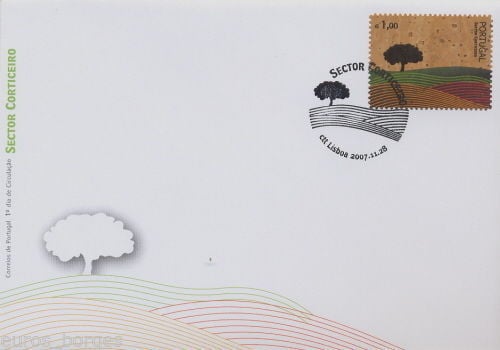