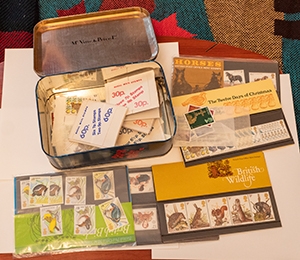 I’ve been sorting through random boxes, clearing stuff I’ve been hanging onto for no particular reason. You know the boxes, they go from move to move, apartment to apartment because you can’t bring yourself to make a decision. Nested deep in one of the boxes was a little tin of UK stamps.  Not a clue why they were shoved into a junk box, but I’m glad I found them.  I vaguely remember getting them in an auction lot over 10 years ago.  I guess because I don’t collect modern UK stamps, I shoved them away thinking I’ll check them later.

What’s in the Tin Box? 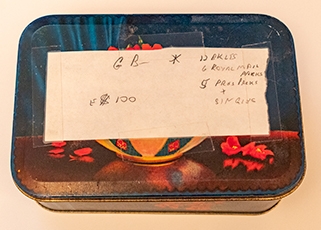 What’s in the tin?

Inside, I found this:

Something odd popped out of the box and intrigued me. 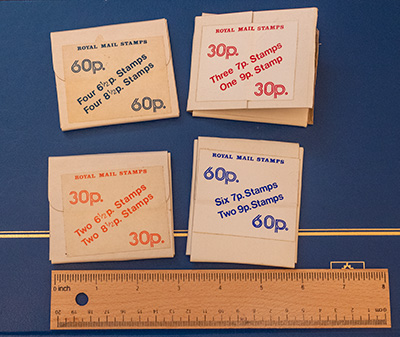 One pack was open, so I took a closer look at it and found more Machins.

That’s a lot of packaging for 4 tiny stamps. In the dim recesses of my brain, I remember looking for info when they first landed in my lap and tossed them back into the tin after coming up empty. Ten + years on, I decided to give it another kick.

The big problem was pretty basic – I wasn’t sure what I was looking at.  I wasn’t even sure the Machin stamps belonged in the boxes or if they had been randomly thrown in.  The boxes weren’t listed in any catalogue I searched. I didn’t want to open the other boxes and assumed they were Machins as well, so I rolled through the Machin listings in various catalogues and came up empty.

It took a lot of detective work to find anything. How do you search for this? Small condom sized boxes of Machin stamps? Or small boxes of UK stamps? Those produced frustrating results, so I went to eBay and scrolled through pages and pages and pages of UK stamps, hoping to spot one. Bingo! One popped up.  I had a name to work with – Scotland’s Experimental Vending Machine Post.

There really isn’t a lot out, even with a working title. I found a couple of sites that talked about them, but nothing substantial was offered up about the who, what and when. I trolled through the UK archives, checked the usual postal sites and information is sparse. Finally, I found a gold mine of information, courtesy one Glen H. Morgan and the Stamp Printer’s website. [http://www.stampprinters.info/Cartons.pdf]   And it’s a quirky little story.

Between 1977 and 1978, 6 cartons were designed, holding between 4 to 8 stamps per pack. They were manually filled and put together by a local post office authority.  This was an unsanctioned act by the Edinburgh depot, leaving the postal authorities a little unimpressed with the initial experiment

‘I am concerned (as I know that you are) that we did not know that this work [making-up the cartons] was being undertaken by your depot in Edinburgh. I would be grateful if you could make it clear to the officer in charge that P&SD should deal with postal regions through PHQ on all matters of policy and not take instructions directly.’ Mr. Hutton, the Manager of the Supplies Depot at Hemel Hempstead
http://www.stampprinters.info/Cartons.pdf

The first vending machines went into business March 7, 1977, in Dundee, Scotland. Followed by Aberdeen and Paisley on Mar 9, Kilmarnock the next day and Edinburgh a month later, on April 15.  Initially 2 books were put together and sold via vending machines. The first two used the Scottish Regional stamps. When rates changed, 4 more books were created, using regular Machins.

The project was shelved in 1978. Costs coupled with a pragmatic look at the bulkiness of the little cartons doomed them:

‘A variable denomination machine which sold counter-sized books containing stamps made from sheet cylinders would be the ideal from our (PMK3) point of view. I am sure the public would also prefer it as books go into wallets and handbags more easily than boxes, and also take-up more room in vending machines and so reduce the capacity and increase the empty time.’
http://www.stampprinters.info/Cartons.pdf

Over production of existing stitched booklets and comparative high costs for the little cartons kill off the idea. UK post printed 70 million stitched booklets yearly but sold only 46 million, leaving a substantial surplus of stamps. Creating a more expensive type of book/package would not help the oversupply situation.

“The cost of cartons versus the cost of stamp booklets was revealed in a letter from Mr. Hutton to Mr. Burn. Counter books of ten stamps apparently cost around £7.93 per thousand booklets, while the smaller SVM booklets of six stamps came in at around £8.67 per thousand. The proposed Scottish cartons would be £140 per thousand due to the making-up by hand and, although this would reduce if packed by machine, the capital costs of the new equipment to undertake this task would be considerable. Mr Hutton further wrote: ‘It seems crystal clear, therefore, that, having already acquired the Libra machines, there is no case financially for the introduction of the proposed vending machines on a large scale”  Glen H. Morgan
http://www.stampprinters.info/Cartons.pdf

When the trial completed, the remaining cartons were bundled into lots and sold off. In a couple of searches online, I found individual cartons sold for anywhere from $5 (Cdn) to $12 (Cdn), depending on the seller. I’m not sure how many cartons still exist but they seem to be a bit rare. It might be that most people gave up looking for info on them, like I did initially, and tossed them into a bin of unwanted stamps.

A few websites I found thought the vending machines were old re-purposed condom machines. Although not true, it’s not a hard stretch to see the rational, when you look at the size and shape of the boxes. I thought the same when I first looked at them. I also thought it was a collector’s method of storing Machins. According to Glen H Morgan (http://www.stampprinters.info/Cartons.pdf) this is an apocryphal twist on the story. As fun as the idea is, the machines were Vendador cigarette machines, www.autonumis.co.uk which were already setup to accept 50p and 10p coins.

I’m resisting the urge to open the packs to see if one of them has the rare questionnaire that was slipped inside some. Not all had them and, quite frankly, my curiosity is killing me. But, I’ll be a good collector and leave them unopened.

I relied heavily on the article for details about the Scottish Experiment. Mr Morgan’s article has a lot more information if you are interested in finer details about the experiment and the discussions behind the scene regarding it.