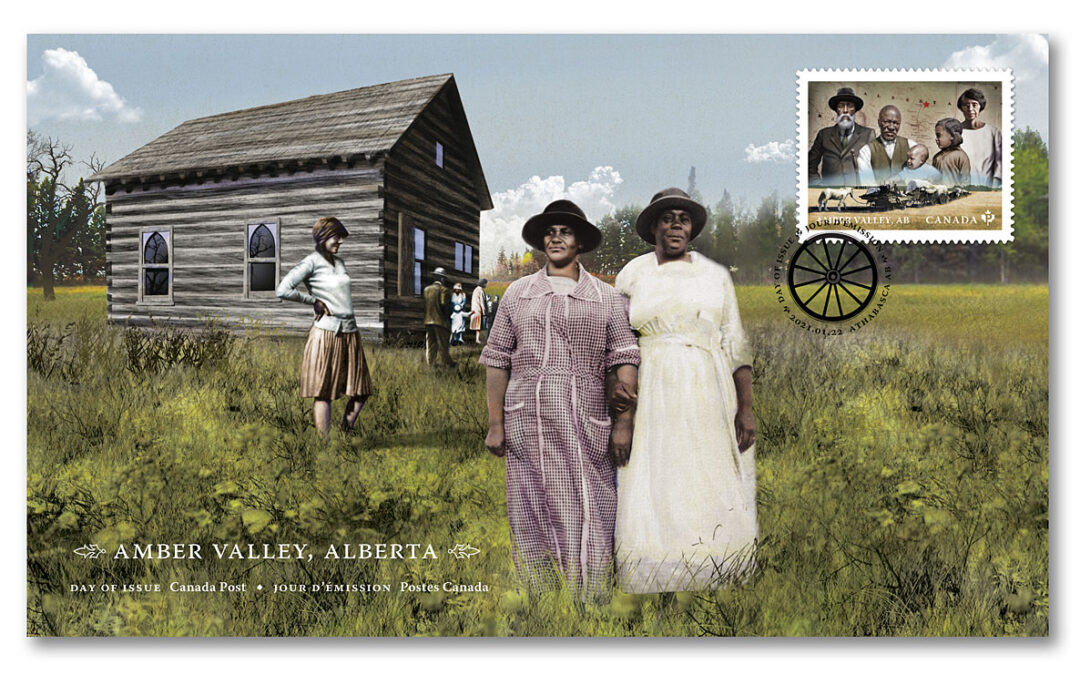 Canada Post’s 2021 Black History month honours two black communities who carved out lives in Canada, Amber Valley, Alberta and Willow Grove, New Brunswick. I started drafting a single article but became engrossed in the histories of these communities and realised they deserved separate recognition. The first of two posts starts with Amber Valley.

Amber Valley is located 170 kilometres north of Edmonton. If you are familiar with northern Alberta, then you understand how cold and remote the Athabasca region is. The people who settled Amber Valley took a difficult and at times dangerous trek from Alabama and Oklahoma, determined to create a better life in Canada, far away, hopefully, from the Jim Crow south.

The influx was sparked by a Canadian Immigration Dept, campaign to bring new settlers to the prairie provinces with promises of free land. Over a 2 year span, approx. 1,000 Black-Americans responded to the ads and settled in Pine Creek, Alberta (later renamed Amber Valley), Junkins, Alberta (renamed Wildwood), Keystone, Alberta (renamed Breton) and Campsie and Maidstone, Saskatchewan. A group of 100, headed for Amber Valley in 1909. They were joining Reverend Harrison (Henry) Sneed, who made the first trip to the Athabasca valley to survey the area in 1905.

Frustrated by their disfranchisement and fearful of escalating white violence, black Oklahomans proved receptive to the appeals of Canadian officials and looked to Canada as their new hope for a promised land of equality and opportunity. Between 1905 and 1912, over 1,000
African Americans made the trek to Canada and most of them came from Oklahoma. Many of these Canadian immigrants had been migrants to Oklahoma, who had hoped for an all-black state but instead encountered white violence and Jim Crowism. They believed they had been abandoned by America and hoped to lead freer lives in Canada, where they were told prosperity awaited. Although part of the larger white migration, African Americans regarded their move to Canada in very different ways from white Americans.

“We Heard Canada Was a Free Country”: African American Migration in the Great Plains, 1890-1911 (siu.edu) 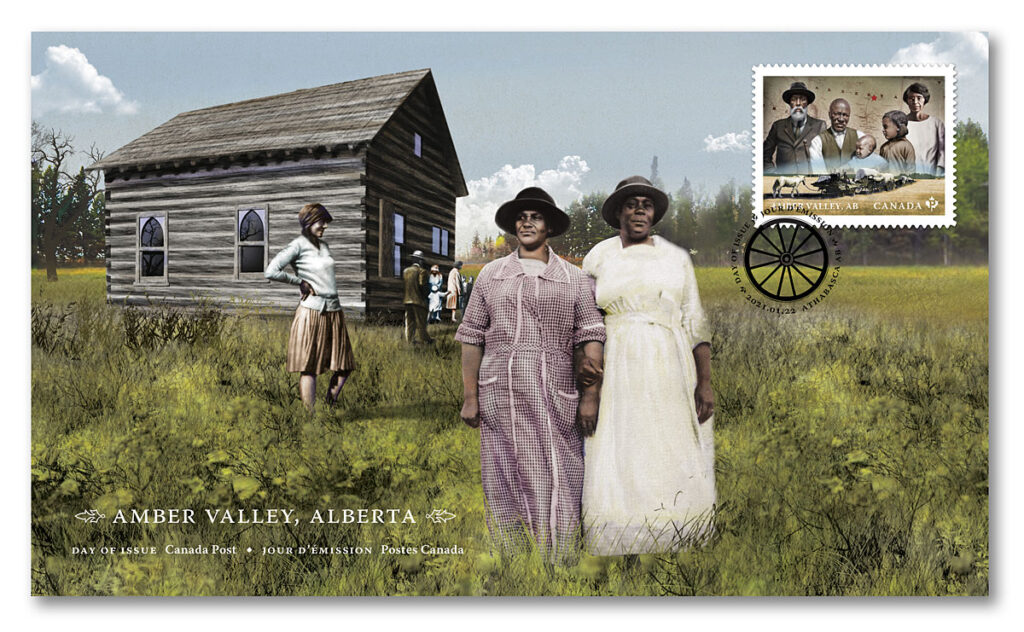 Various records offer up different numbers of people who followed Rev Sneed.  Most indicate approx. 100 people made up the first trip. More followed, but by 1911, a group of 200 blacks, heading to Amber Valley encountered racist issues at the border. It’s easy to gloss over the success of the community and pretend they were welcome to the North, but the Black Americans succeeded because they persevered, not because a welcome mat was rolled out.

Old racist tropes were resurrected to prevent blacks from settling Canada, ranging from the hysteria claiming black communities were dangerous to white homes, to black homesteads would drive the price of land down. The Federal government was petitioned to halt all non-white immigration to the country.

Once black settlers started arriving in larger numbers, however, they did rely upon indirect methods to discourage these “undesirables” from undertaking the journey up north. While simultaneously advertised as hospitable and inviting to the American whites, the climate of the Canadian west was presented as much too cold and severe for any blacks. Strict economic and physical standards aimed at restricting newcomers, but most blacks passed the tests. Finally, agents hired by the Canadian government were sent Oklahoma to persuade these potential immigrants that Albertan soil was poor and that they would, in any case, have difficulty crossing the border. These informal policies were effective, and by 1912, black immigration to Alberta had all but ended.

Actions by the Canadian government killed off the movement north. By 1911, white communities were pressuring the government to act.  On August 12, 1911, Order-in-Council 1324 was drafted to stop all black immigration for up to a year.

“the serious menace to the future welfare of a large portion of western Canada, by reason of the alarming influx of Negro settlers.”

Although Order 1324 failed to become official policy, other methods were instituted. 1324 failed, not because of a sense of anti-racist sentiment on behalf of the Canadian cabinet, but because the Laurier government was facing an election year and they didn’t want to stir up any controversies or start a political row with the US.

Instead, Canada began what has been described as a “campaign of diplomatic racism.” A polite way of saying Canada instituted racist rules but did it in a way that didn’t draw attention. If there’s one thing Canada excels at, it’s being polite and hiding our racism behind a cloak of respectability. Medical exams were made harder to pass for blacks, doctors were bribed to fail applicants, head taxes of up to $50 per person instituted, certificates proving suitability as farmers refused were among the tactics used. The government finally resorted to sending officials to Oklahoma to discourage blacks directly. Only then did black immigration fall off.

Searching through various archives rewarded me with many photos of the citizens of Amber Valley. Too many to post here, but a wonderful look at a flourishing black community.

The photos from Archives society of Alberta provide a slice of life in rural Alberta and highlight a much-ignored part of Canadian history – the contributions blacks made in all walks of life. Black History Month offers a small correction into this unbalanced view of our history, but we still have a long way to go to appreciate who helped build Canada.

Like many rural communities, people gradually drifted away to larger cities for better economic opportunities. Farming is arduous work; farming in a northern community can be harsh and unforgiving. Over the decades, Amber Valley’s population declined until it was nothing more but a memory. The school closed in 1950s and the post office in 1968.  As the remaining population began to age and die, their original homesteads were either sold, demolished, or left to disintegrate into the soil.

Some of the descendants of Amber Valley’s immigrants were Violet King Henry, Canada’s first black, female attorney, Cheryl Foggo, award winning author and playwright, and Oliver Bowen, engineer behind Calgary’s first light rail. The Oklahomans who settled in Alberta left a hell of a legacy. 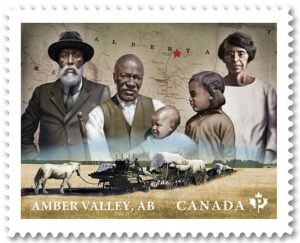 If you find these stamps & their histories interesting, check out Lime Design’s previous Black History Month stamps. Designer Lara Minja has created 4 previous series and they are equally outstanding. Minja is talented and imaginative in her designs. If you collect Canadian, history or Black History stamps, these should be in your collection.

I’ll post about the second stamp in this series later and pop a link here when it’s done. In the Meantime, check out other upcoming issues for Canada

2021 stamps for 11 countries are now listed and 3 almost ready to load. That didn’t take long. If there is a country you’d like to see listed, drop a line in the comments and I’ll see if I can bump it up on the list. 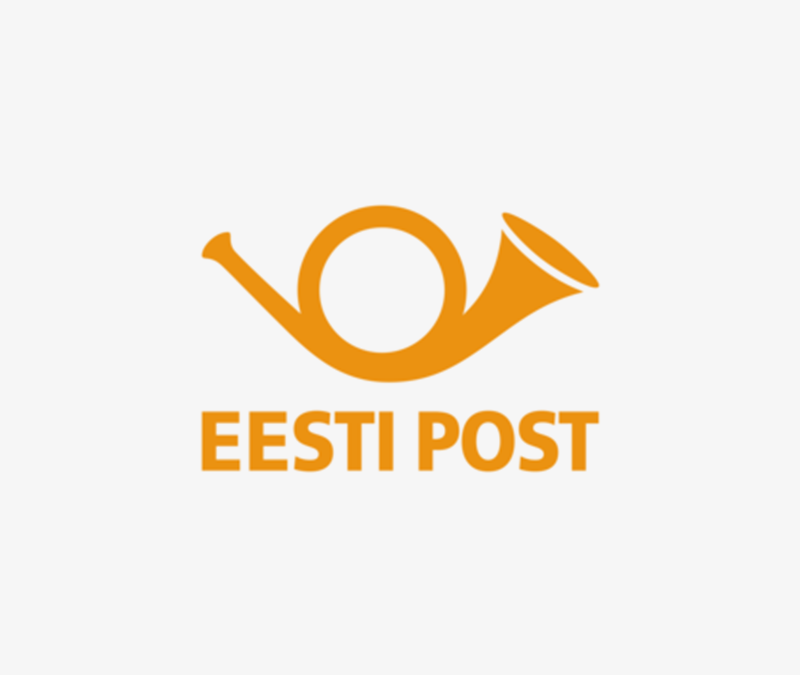 Eesti Post has released subjects and dates for the Estonian stamps 2021. No advanced images are available, which is shame because a few look interesting. Photos and designer information will be posted as the info is released. Estonian stamp collectors can look forward to 5 100th anniversary issues. For specialty collectors, there is an aviation stamp celebrating 100 years of Estonian aviation to look for in Sept and wildlife/nature specialists can expect several stamps throughout the year.

If you spot a misplaced accent or spelling mistake, please leave a comment below and I’ll correct it.

Subjects for 2021 stamps include:

The first stamp is now available via Estonia’s online store.

I’m now up to 10 stamp issuing countries on this list. It takes quite a bit of time to pull the info together. It’s odd how many countries don’t supply lists, or indeed information on their stamps.

I’m attempting to include titles and subjects in the country’s native language when I can. It takes a lot of toing and froing with various websites, and Google translate, which means occasionally information is missed. Hopefully, the accents are correct, I’m taking a great deal of care in getting them placed properly. If something is wrong, please, drop a line in the comments section.

In the works is a newsletter you can subscribe to keep up to date with changes on both the website and (hopefully) one tailored to stamp news.  In the meantime, bookmark this page so you can return to see new articles.

Subjects and release dates for Norwegian 2021 stamp issues are available. Norwegian post office, Posten, doesn’t have images for the stamps yet, but, as usual, I’ll add them as they come available. Remember to follow Bitter Grounds (links at the bottom of the article) or bookmark this page.

Posten’s website has an archive of previous stamp magazines, Posten Norge Stamp Magazine, dating back to 2016. 5 magazines are published a year and you can download them for future references. If you want to keep the magazine, rather than just read it online, right click on the words “PDF File” and save. It’s available in English as well as Norwegian.

This year will see designer Magnus Rakeng return with a Peter I Island stamp. Rakeng has created a number of sleek fonts you can check out here Nyheter – Melkeveien. He also designed last year’s Polar Motif stamp depicting Jan Mayen island. Other familiar designers are Enzo Finger, Kristin Slotterøy, Camilla Kvien Jensen and Jørn O. Jøntvedt, all of whom contributed designs in 2020.

Subjects for Norway’s 2021 issues will include: