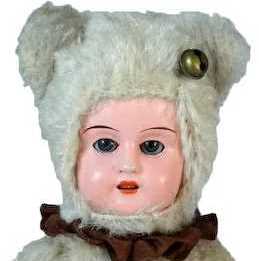 This is terrifying! Two faced teddy bear anyone?

Feast your eyes on the original Two Faced Teddy! One side is an adorable, cuddly teddy bear. The reverse, a po-faced human staring at you with dead eyes. 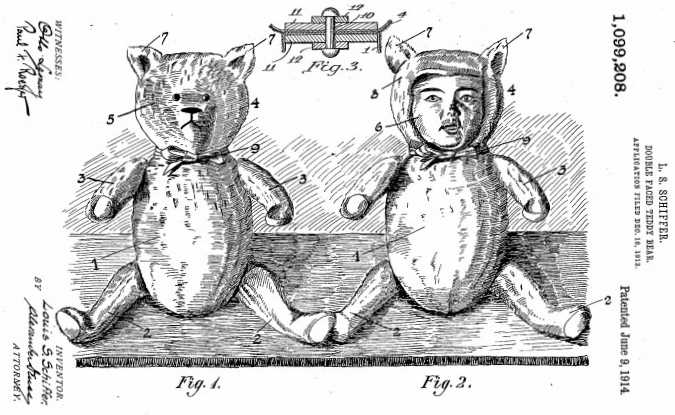 Not sure how I stumbled across this one. I was looking for patents dealing with early radium products and became sidetracked. The sketch gives me the giggles when I look at it. The heads look like they were transplanted onto Mr. Peanut’s body. Poor Mr. Peanut, we hardly knew you.

A toy comprising in combination, a body, and a head for said body, said head having two faces thereon looking in opposite directions, one of said faces resembling that of a bear and the covering of said head being arranged to form projections serving as ears for said bear’s face, the other of said faces resembling that of a person and the cover of said head being arranged around said person’s face in the form of a cowl whereby said projections serve likewise to give a clownish effect.

Can you imagine waking up and seeing this staring at you? A furry human clown glowering at you in the dim light?

The actual design is quite interesting. The head swivels 180 degrees using disks and rivets/pins. The arms and legs employ swivel joints so they would be flexible.

… the head being attached to the body  by means of a swivel joint so that it can turn easily to the left or right through 180°
and sit steady and parallel with the body when facing in either direction.  Patent letters

The only example I could find of a two faced bear similar to this patent, was produced by the renowned stuffed animal maker Bernhard Hermann, sometime between 1930-1940. I could find no reference to any being developed by Louis Schiffer. I’ve tried looking for German patents for the Hermann bear as well, but had no luck. I was curious as to whether Hermann was aware of Schiffer or had developed the two-faced bear independently. They are strikingly similar. 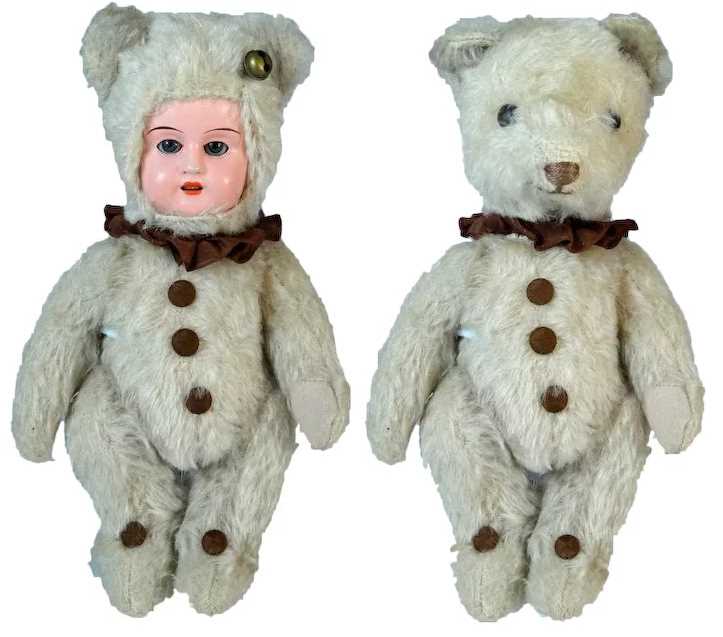 Let’s go play in the forest. You’ll be safe. Trust me!

It’s very close to the patent, right down to the swivelling head and moveable arms. This toy is slightly less terrifying than the one in the 1914 diagram, very slightly.  The doll/bear screams out clown in the sewers asking if you want a balloon. Then again, I’ve never been a fan of dolls, so maybe it’s me.

If you’d like to see the bear in more detail, saunter over to Ruby Lane and check out it out.