After 580 + articles, I’ve been thinking about the evolution of a blogger. More precisely, the changes I’ve made to the structure of this website and the content that drives it. It’s interesting going through older posts and re-editing them. That act has provided some insight into how Bitter Grounds Magazine has unfolded over the decades.

I started in 1994, or there abouts, with a simple one-page website. This was in the Netscape 1, pre-tables days. I wasn’t using the Catpaw moniker yet, that came shortly after I set the site up. I tried to find it on the Wayback Machine, but unfortunately it seems to have melted into the ether. As I was writing this, I realised in 2024, I’ll have been blogging for 30 years. I’ll have to throw a party. At first, it was simply a fun little space to post random thoughts and silly things. That’s back in the tilde days when most of our sites were attached to an internet provider and looked like this www.internetprovider.com/ ~catpaw. The addresses weren’t elegant.

I was among the first customers to sign up for the shiny new internet service. The fellow who ran the ISP was good. He helped me get my first design job and taught me a lot about the basics of the both the Internet & the fledgling web design business. He loved sharing his knowledge with anyone who wanted to listen. Total, wonderful tech geek.

I purchased my first full-fledged web site sometime after the turn of the century. It was at that time I switched to using catpaw, a name I acquired during my BBS days.  It took me awhile, but I found the site on the Wayback Machine and scooped my old logo.

I was damned proud of this logo

I don’t use the venerable cat silhouette any longer but occasionally think I should dust him off. He no longer fits into the format though. It was at this point I was trying to structure the site and bring a bit of planning to both the design and content. This was pre-WordPress days, so each post was created as an individual page. It wasn’t as simple as the big backend database holding and sorting all the content and formatting, we use now. It was all done manually.

Lot of content was lost because every change meant deciding what to do with older stuff. Websites could quickly descend into an unwieldy mess.  I knew I wanted to run a magazine format but couldn’t quite get there. The content remained static until I tried Blogger for a while. It allowed me to setup a fledgling structure and play around with the vision I had for a website.

I also dabbled in WordPress, but at the time it lacked flexibility. I wanted multiple categories with constantly changing content. WP didn’t allow for it. We didn’t have the option to post to multiple categories. It was around 2008 I discovered Joomla and its amazing abilities to let me setup a magazine style site. I never really mastered it, but I had a hell of a lot of fun. Over the next couple of years, the content began changing. I was doing more than posting periodic thoughts and explored topics I loved to share with people.

Bitter Grounds is born & nothing happens

Oh, and the name Bitter Grounds? I had just finished reading Neil Gaiman’s Bitter Grounds and thought “that would make a great name for a magazine”. It can be interpreted in several ways. I was sure the title was taken, so colour me surprised when I found out no one had. I paid my money and switched everything over to bittergrounds.com sometime in 2014. I think. Time has a habit of playing games with memory, so I might be a little off in my dates.

One odd thing happened. By 2015 I stopped writing about politics. By nature, I’m a political animal. but it had become too exhausting and divisive. I guess, it ceased being fun discussing. In the process, my writing started to become erratic. I’d get a big surge of energy and write like mad and then peter off. Consistency is important if you want a successful website and I just couldn’t maintain momentum.

I started rethinking what I was interested in writing about – stamps, history, technology, design and eventually photography.  I remember sitting on the balcony mulling over my limitations when it came to creating a magazine. It wasn’t Joomla, it was my lack of skills with the backend of the software and time commitments to master it.

The crisis that triggered change

In the summer of 2016 Mom was diagnosed with cancer and everything turned upside down. If you’ve ever dealt with a cancer diagnosis, then you know it’s like being swept up in a tsunami. Life is no longer your own, it is dictated by endless visits to hospitals and appointments. I stopped writing for a long time. I just had nothing to say.

Looking back on the past four years has made me rethink a lot of my views. I’m surprised by the combination of inertia and despair and what a toll it took. Now? I have lots to say, including what I was thinking at the time but couldn’t put it into words. I think, for the first time in my life, words were not available to me during that time span. And that’s a scary thing for me. Words are something I always found strength in, a source of joy. When I couldn’t express myself the way I wanted, I felt like a large part of me was missing. So, I stopped trying.

In 2018, during a good period in Mom’s cancer care, she suggested I start getting serious about writing again. She knew something I wasn’t fully aware of – that I’m happiest when I’m writing. I still laugh when I remember her telling me I get grumpy when I don’t write.

Once again, Mom was crucial in the change. It was her suggestion that I try to be more personal, bring more of myself into the site. No, not the politics, which I well and truly torpedoed in the re-design. She meant, express more excitement about things I loved. Allow readers to “hear” what she hears when I talk about various topics. Also, let people know who I am, make the website more personal. She was right. Things became fun to again.

I wanted a magazine. Not a site where I complain about shit in life. I wanted to explore ideas and share my excitement about drawing, photography, stamps – oh the stamps I love – and technology. That’s what had been missing, that sense of exploration and unbridled joy at learning something new.

Was it too much to tackle?

I sat down with paper and pencil and drew up how I wanted Bitter Grounds Magazine to look.  All fine and dandy, but I felt that old sense of frustration with Joomla creep back in. I lacked certain skills in using it and quite honestly, was too tired to try and learn how to change the back end. It felt cumbersome. I wasn’t happy with ready-made templates though because they didn’t share my vision.

Then a friend stepped in. Cory suggested I try WordPress again but use Divi to make it create the structure I so desperately wanted. He’s a skilled craftsman who gave me a lift when I needed it. Website Creation, Design, Maintenance, and More – MidState Design <- that’s him. He doesn’t know I’ve added this, but he was instrumental in kick starting Bitter Grounds Magazine back into life.

2019 started off badly but there were still rays of hope. 2020 came and blew that out the door. When Mom died in April, I was crushed. I still haven’t gotten over it. I still cry. And feel lost at times.

While I sat by mom’s bed, I debated about ending the website permanently. The idea of continuing seemed impossible. I kept thinking why bother. It’s funny the things your brain latches onto when it’s trying to anchor itself. I emailed back and forth with a friend throughout the long week and she told me “NO” that was not acceptable. That’s what friends are for – to stop you from doing stupid things.  I kept it and wrote sporadically, and quite honestly, half-heartedly throughout spring and summer.

You may notice how many posts are shorter than in previous years. I stopped trying to write War and Peace and started working towards producing, briefer, focused articles. (Except for this one.) I have 28 drafts ready for formatting and proofing, so I always have something to post even during those periods when I’m not in the mood to write.

I also made changes in categories and altered the design … again. Oct to Dec were productive months. I kept tweaking the design until I felt I was approaching what I have been looking for. Some categories were merged, and a few new ones created.  I’m not afraid to change things up now. If something isn’t working don’t hang onto it. Remove or change it. What’s the sense in keeping a format or category that no longer fits?

It’s nice to have that sense of joy in writing return. I didn’t realise it was missing until it was nearly too late. The most powerful tool a blogger has is insight into why they create. Had it not been for friends, I would never have achieved it. So, to all of you, thank you. World Tripe Day is coming up – I blame Pepys

Ah yes, World Tripe Day is a thing. You might be one of those shaking your head in disbelief along with me. I mean… tripe? It’s one of those foods that you either love or loath. There doesn’t seem to be any middle ground.

But what about Pepys? Where does he fit in with World Tripe Day? Samuel Pepys is one of my literary heroes. My first introduction to the amazing Mr. Pepys was in a university English class. A professor talked about Pepys’ diaries and I toddled off to the library to find out more. Been hooked on him ever since.  The chance to talk about Pepys was too great a temptation to pass up.

I didn’t script anything before hand this time, just kind of rambled, stream of conscious style. I think that works better in some cases because I can make eye contact with the camera. I don’t do a lot of editing as a rule so you get me in all my meandering glory. Not because I’m lazy … ok, I am a bit lazy. But, I’d rather you hear me as my friends do – lots of hand waving, lots of eyeglass fidgeting and periodic bouts  of “hang on I’m thinking” moments. 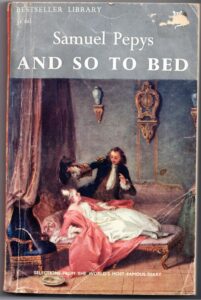 My slightly battered, but much loved copy of And So To Bed.

The book I quote from is And So To Bed published by Bestseller Library. It covers the years 1660 to 1662. My edition was printed in 1959, and the print is really, really small. Not the best edition I’ve ever seen, but I have a soft spot for it because I paid a princely sum of $3.50 as an undergrad. Battered but still readable. You can find copies at ABEbooks.

So. Tripe? For or against. Leave a comment and let the tripe wars begin!

Tripe - yea or not a chance
We use cookies to ensure that we give you the best experience on our website. If you continue to use this site we will assume that you are happy with it.Ok