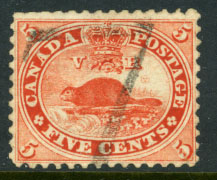 This has to be one of my all-time favourite Canadian stamps, the 5c beaver stamp. It’s the one I coveted the most when I began collecting. I’d look at it, through the case in the local hobby store and wonder what it would be like to own it. I grew up with stories of the fur trade in Canada, the Coureurs des bois and the Hudson’s Bay Company, so the history that tiny piece of coloured paper represented was deeply ingrained. I often think it’s a slightly wonky, stoned beaver with Godzilla proportions on that small waterfall but still … it was THE STAMP, as far as my young collector self was concerned.

The #15 beaver stamp re-used the original Sir Sandford design from the first stamp issued, pre-Confederation (pre independence) 23 April 1851 for the Province of Canada. Sir Sandford Fleming (yes, he of railroad and Standard Time fame) designed the original 3 pence beaver, in collaboration with Canada’s first post master general, the Honourable James Morris. The stamp is notable because it was the first official stamp issued, anywhere, with an animal on it. Stamps normally depicted coat of arms, royalty, presidents, not tree gnawing rodents.

The Right Honourable Rodent, known by his formal name Castor Canadensis or North American beaver, played a crucial part in the development of Canada and is one of the country’s national symbols. How important? This important:

Looking out over Ottawa & protecting Parliament

That angry, noble looking fellow can be found over the Centre Block entrance on Parliament Hill. 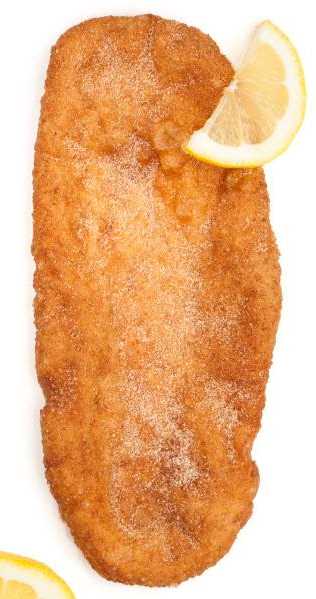 Ok, the last one not so much. It’s a sugary, delicious snack made of deep fried dough and lots of .. well .. sugar. If you come to Canada, try you have to try a Beaver Tail, it’s the law… trust me

Deep fried snacks aside … the demand for beaver pelts and cod drove the economic engine of early Canada. Beaver hats were all the fashion in Europe for 250 yrs. Canada was a rich source of the must have fur, pushing exploration and later settlements across the continent. One of the great fur trading companies still exists  (although as a department store, rather than trading post) – the HBC, or Hudson’s Bay Company, founded May 2, 1670. At one point, it was the single largest land over in the world – owning rights to about 15% of Canadian territory.

The history of the fur trade and the role beavers played in it, is sewn into the fabric of Canada’s identity. So much so, that in March 24, 1975, the beaver was finally given official recognition as an emblem of Canada, although most of us grew up believing it already was. 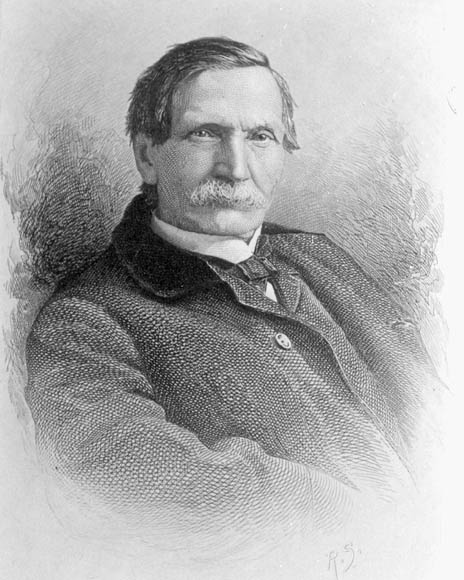 In 1851, Sir Sandford picked the beaver for the first stamp of the Province of Canada because of it’s importance. It’s also meshed nicely with the symbolism of a young country busily building itself. It’s believed the engraver was Alfred Jones (1819-1900) (see photo to the right) of the American Bank Note company. He was a renowned engraver and later president of ABN.

The engraving was used on 4 stamps over the next 8-9 years. Using the Scott’s numbering they are:

Today’s article focuses on the 4th printing. The 1859-1864 series (stamps 14 through to 20) were the first cent issues printed in Canada. In 1857, the Currency Act changed provincial money to the decimal system, hence the change from pence to penny. The new stamps reflected the change.

This stamp is eminently affordable for the novice collector, but still offers interesting challenges to experts. There are many variations in shades, paper types, re-entries and errors. Here are the better known ones:

Re-entry – so many, it’s hard to list them. 2 types of major re-entries are well known. According to Unitrade, plate 100 was reused (touched up and re-entered) 10 times which resulted in 11 separate identifiable plate entries, which calculates to a possible 1100 different re-entries to collect.

Errors – as with re-entries, there are many errors to collect:

To further complicate things, an imperforate sheet was issued (100 stamps), with no gum (#15a). These are the unicorns of the Canadian stamp world. Very rare and tons of fakes. An authenticated #15a could potentially fetch up to $17,000 if it came up at auction. However, only 2 blocks and two pairs are known to exist. It’s pretty easy to fake a single copy so avoid any offerings unless you get it authenticated.

High price variations aside, this is an early pre-Confederation stamp you could spend years researching while on a budget. A mint, Fine with original gum will cost around $600. Be careful who you buy it from. Regummed stamps are not unusual. If you simply want to own one (or more) you can get them for as little as $3 or $4 for used or $40 mint space filler. They have defects but are attractive and fun to collect. If you are a cancel hound, you will have a wealth of choice for very little investment. To me, used issues present far more of a challenge and much more fun.  I’ve bought a handful over the years, picked because of the interesting cancels, like these ones:

My favourite is the one on the far right with the bullseye cancel: 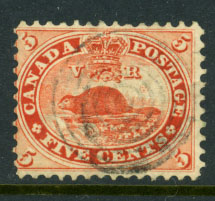 That means a rich field to pick from, regardless your budget.

Where to find information on the 5c beaver stamp

If you decide to expand your collection into the #15, you might want to invest in a few catalogues or see if your local library has any of these:

Unitrade Specialized Canadian Catalogue – an older copy will do. The prices don’t change much to make it imperative to have the latest catalogue. It has a decent selection of the variations.

Stanley Gibbons Commonwealth & Empire Stamps – excellent catalogue and breaks Canada down nicely for the pre-Confederation stamps. Just look under Colony of Canada for this issue. It’s #31.

Specialized Edition Canadian Philatelic E.F.O.’s – for sheer number of variations listed, this is the go to book. It has excellent full colour blow ups of the errors and variations, helping with identification. However, the catalogue is seriously irritating if you think linearly. You’ll have to hopscotch all around the book because each type of variation has it’s own section. Re-entries are on one part, then you’ll have to flip over to colour variations and again flip around to find plate errors and so on. I’d prefer to see the book lay out the errors stamp by stamp so there’s far less page skipping to be done.  Another irritant is the numbering system. They use neither the Scott’s nor Stanley Gibbons numbering.

The Five Cent Beaver Stamp of Canada by Geoffrey Whitworth ISBN-10: 0900631120 and ISBN-13: 978-0900631122. ) – speaking of unicorns.  Very hard to come by now. It was published by London : Royal Philatelic Society, 1985, sold for 7 pounds 50 and is incredibly difficult to find. I’m still looking for my own copy. It’s extensive and the definitive study for any collector. If you see it, grab it. You can post a bragging comment below and I’ll be suitably jealous. It’s a slim book, 90 pages but chocked full of invaluable details.

FINAL NOTE: I’m a bit gobsmacked at how many photos of ferets, muskrats, pack rats, otters and prairie dogs on the internet are labeled “Beaver”. Here’s a tip – beavers don’t have fluffy tails. Nor do they float around the water on their backs or amble about in deserts nibbling seeds.  In case you are momentarily confused, this is a beaver: 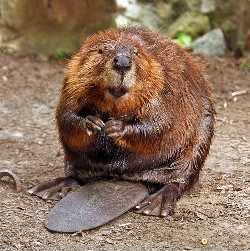 ← Spring in Toronto - a riot of green & colour CONTACT → 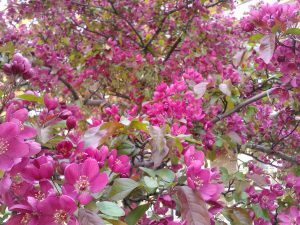 Spring in Toronto – a riot of green & colour
Spring in Toronto brings a riot of colour. After the…
← The magnificent cork stamp from Portugal
We use cookies to ensure that we give you the best experience on our website. If you continue to use this site we will assume that you are happy with it.Ok