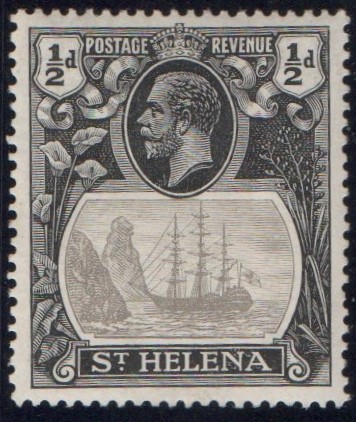 St Helena is a tiny speck in the ocean, best known for it’s infamous exile, Napoleon. It’s also home to some beautiful stamps.

The particular issue today is the St. Helena Colony Badge series from 1922-1937.   The badge shows a 3 mast ship sailing by two rocks. The stamps were printed on both chalk-surface and regular paper with two different watermarks – either Multiple Crown CA or Multiple Script Ca. These lovelies were designed by Mr. T. Bruce. I’ve tried to find information on the mysterious T. Bruce, but so far I’ve dead ended. I think it’ll take a long trip to the library to source the information.

Watermarks for the St. Helena stamps

The series is collectable on it’s own. There are 15 stamps in one set – ½ p through to 15 shillings and 5 stamps in the second set. The higher values were printed in smaller numbers because there really wasn’t a big demand for them. The 5 schilling stamp wmk script, for instance, fetches $1300 (Cdn) and higher. Postally used stamps are worth more, but beware forged cancels. If you are thinking of a higher valued stamp, stick with reputable sellers and avoid the once in a lifetime bargains often found at eBay.

What makes this series exciting are the plate flaws – torn flag, cleft in rock, broken mast. If you want to explore the flaws, you need to invest in a Stanley Gibbons catalogue. They are far better with British Commonwealth and Empire stamps than Scotts. The Scotts regular catalogue fails to list any of the major flaws. Gibbons Commonwealth & British Empire Stamps 1840-1952 is my go to catalogue, although I wish they’d issue it in digital format.

Looking at the cleft rock flaw

Although I normally collect airmail and Canadian, I do enjoy wandering through British Empire stamps. I picked up a small lot of British Empire stamps years ago. I read an article on the plate flaws and became frisky thinking “Oh maybe I have one”.  Imagine my shock to find I had this one:

Yes, the cleft rock in my lowly mint, unhinged ½ p issue was sitting there in all it’s glory. It catapulted the price from a couple of bucks (on a good day) to about $60 Cdn in the current market. The catalogue price is wildly over priced, you’ll never get what’s listed there.

Close up of the flaw in the rock

Here’s a close up of the flaw – it’s easy to spot if you scan your stamp in and blow the size up to full screen.

If you’re interested in St Helena stamps, check out the St. Helena, Ascension and Tristan da Cunha Philatelic Society .They have a fine Sales & Wants page.

Don’t forget to use online resources to help you figure out what’s in your collection. Stanley Gibbons website is one of the better. It’s chock a block full of information. Go to their site and do a search for Cleft Rock, Torn Flag or Broken Mast. Any search will pull up good quality scans you can examine to see what the flaws look like. You’ll also get a good idea about the current going price for quality issues.

← Well this product search went well, didn't it Well ... this is confusing →

Well this product search went well, didn’t it
← Soruth 1868 – two stamps from a Princely State
We use cookies to ensure that we give you the best experience on our website. If you continue to use this site we will assume that you are happy with it.OkNoRead more