We were promised magnificent flying cars

Contents hide
1. EINARSSON Flying Car
2. A sedan with wings
3. Here’s a Farman biplane
4. And one of my favourites, Alexander Graham Bell’s Silver Dart:
5. So where now with the promise of flying cars?
5.1. Read more:

I know I promised irradiated feet, but I couldn’t pass up the Edsel of flying cars. Take a moment to appreciate the breathtaking fins on this:

Every time I look at the drawing, I think it needs to be a deep cherry red with chrome so bright you need sunglasses to withstand the glare. Sarcasm aside, this design is very much a product of the times. Designed in the late ‘50s and patented in 1963, the Einarsson Flying Car has an admirable meshing of luxury car with the sleekness of a James Bond getaway vehicle. Oh, and those fins!

The dream of turning a car into an airplane goes back to at least the 1930s.  I remember the “future of tomorrow” films of the 60s that had us zipping around with our own personal jetpacks and Jetson-like flying cars by the turn of the century. The future was so full of yet to be conquered technological wonders that would make our lives easier. Instead of flying cars in every driveway, we ended up with Twitter in every pocket. The disappointment is crushing.

A few actual working flying car prototypes have made if off the drawing board. The most notable being the 6 designs build by (Molt) Taylor Aerocar in the late 40s and 50s. One was still flying as late as 2008 and there’s a website devoted to people hoping to buy one. They look like traditional 2-seater aircraft with larger, road ready wheels, except for the Taylor III, which resembles a Franken-mini. Looking at Taylors got me thinking about other attempts, which in turn led me to one Einar Einarsson and his patent for a Flying Car.

A vehicle capable of cruising on land and in the air comprising a body, a plurality of wheels mounted under the body to support the vehicle while on the ground, means for supplying power to the wheels for cruising on the ground, front and rear propellers mounted on the body to provide for take-off and cruising power when in the air, and a pair of pivotally mounted wings secured on the body and being adjustable as to the angles to the horizontal for take-off and cruising positions for the wings, said propellers being connected to receive power from the power supplying means and the wings forming a wing extending from the front propeller to the rear propeller with a bridging element to receive the pressure between the propellers

Einarsson’ s design borrows heavily on the Aerocar idea, with a number of alterations that shows a bit of forward thinking. Looking through the cited patents in Einarsson’s filings, I find it curious there are no references to Molt Taylor’s patents. However, I’m neither a lawyer nor an engineer and my knowledge of both is just enough to show how much I don’t know.

A sedan with wings

Unlike almost every flying car design I looked at, Einarsson seemed to envision a luxury sedan with wings, rather than a compact, economical model. It would be the ultimate marriage of the sleek 1950s tail fin stylings with a private aircraft.

Einarsson Flying Car patent showing front and side with propellers

The Taylor flying car relied on a push propeller. For those in the audience who aren’t aviation fans, let’s take a quick break to explain. The rest can skip down a few paragraphs. Aircraft today (excluding jets) generally have the propeller on the front of the plane – either on the wings or the nose. This is referred to as a pull propeller because it pulls the airplane forward. Although this is considered the traditional form, the earliest aeroplanes used a push propeller. Here are two famous examples: 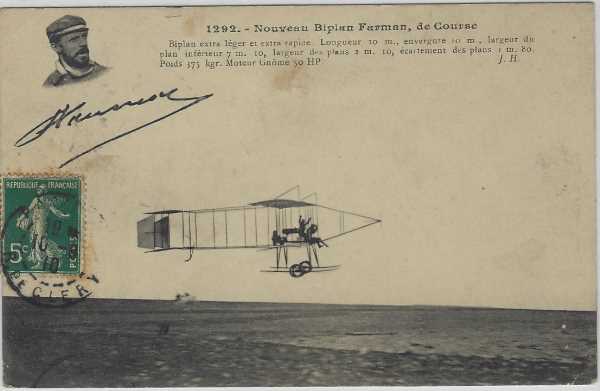 And one of my favourites, Alexander Graham Bell’s Silver Dart: 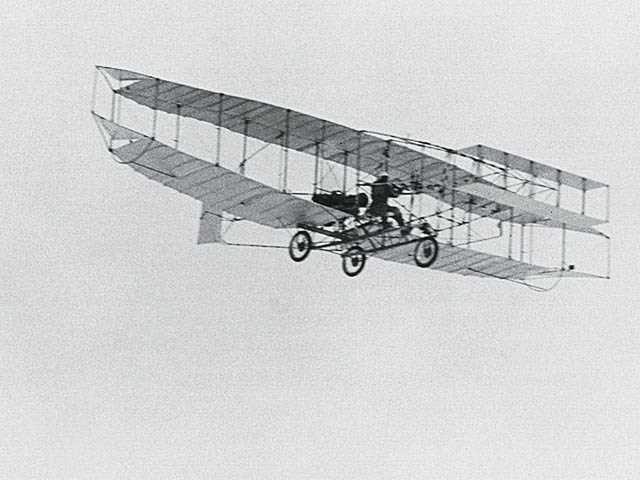 Front and side with propellers

See the difference with modern airplanes? The propeller is seated to the back (behind the pilot) and pushes the airplane forward. Many pioneer aeroplanes used this style and, if you poke around google a bit, you can find a couple modern planes that use it as well, though it’s not very common.
The Einarsson Flying Car proposed using both the push and pull propellers in what is called a push-pull configuration. This has some benefits re: drag and stability if one engine dies but it also greatly decreases fuel efficiency.

The added weight along with 2 engines capable of creating enough lift stirs up a few questions. Looking at one of my favourite pioneer planes – the Antoinette Flyer (1906), the V8 engine in that wood and cloth aeroplane weights 209 lbs alone. I wonder how large an engine would need to be to lift a large, steel, 2 propeller car with wings, carrying both driver and passengers. Modern aircraft have the advantage of light weight materials to help with the tricky weight problem. They also benefit from modern micro circuitry that creates efficient instrument panels. Neither of which were available in the early 60s. The Einarsson Flying Car would be the original heavy metal behemoth. The patent makes no mention of instrumentation and glosses over engines, two crucial components. Perhaps Einarsson was more interested in basic over-all design at this stage.

… each car may have a common plant to drive both the ground wheels as well as propellers with suitable clutch devices to control one or the other cruising power. Separate power plants may be used for air travel jet engines may also be used with and without the use of propellers.

There wasn’t a hope in hell a jet engine was going to be affixed to the car. Imagine the havoc caused on roads when someone kicked on the engine. The backwash alone would be a public hazard. One also has to wonder what the noise level would be inside the car with both engines running whether jet or regular.

Getting back to the patent, Einarsson envisioned foldable wings, although this is also frustratingly vague. The best I can figure is they would fold flat against the body when not used. This wasn’t going to be a one touch convertible model. To use the wings, the driver would have to pull them out and affix them, which sounds a bit like an arm strong application – better have a strong set of arms to put them in place. I’ll leave you to read about the wings and let me know how you think they’ll work. 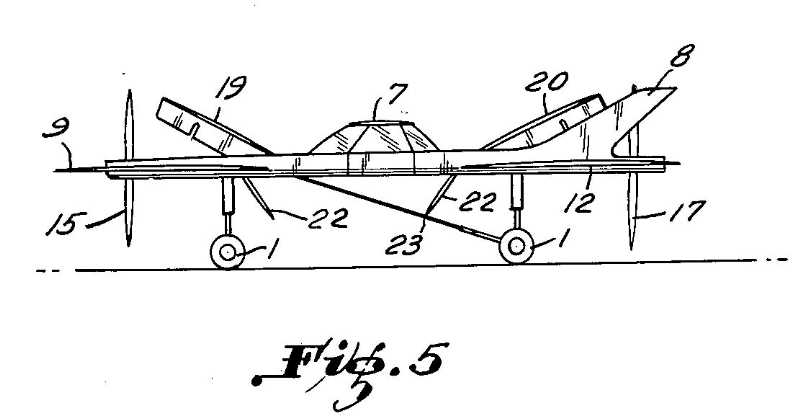 The sheer weight alone would make this one expensive vehicle to run. Which led me down another rabbit hole or two of conjecture – what about fuel. The basic car would run on regular gas, but the air and jet options would require special fuel. Without easy access jet fuel, the lack of infrastructure doomed that part of the design, not to mention proper pilot training to run a jet propelled aircraft. I also wondered how much space the vehicle would need for take off. This isn’t a compact little Taylor Aerocar. As I wrote earlier, this would be a behemoth of steel, chrome and engines. I wonder what the over all weight would be? I have about 20 other questions but, I’ll save them for another discussion because I can see another couple of patent articles in the making.

So where now with the promise of flying cars?

Though most entrepreneurs like Elon Musk have abandoned the idea as impractical, there are companies currently building working prototypes. Look at the heart stopping lines on this beauty: 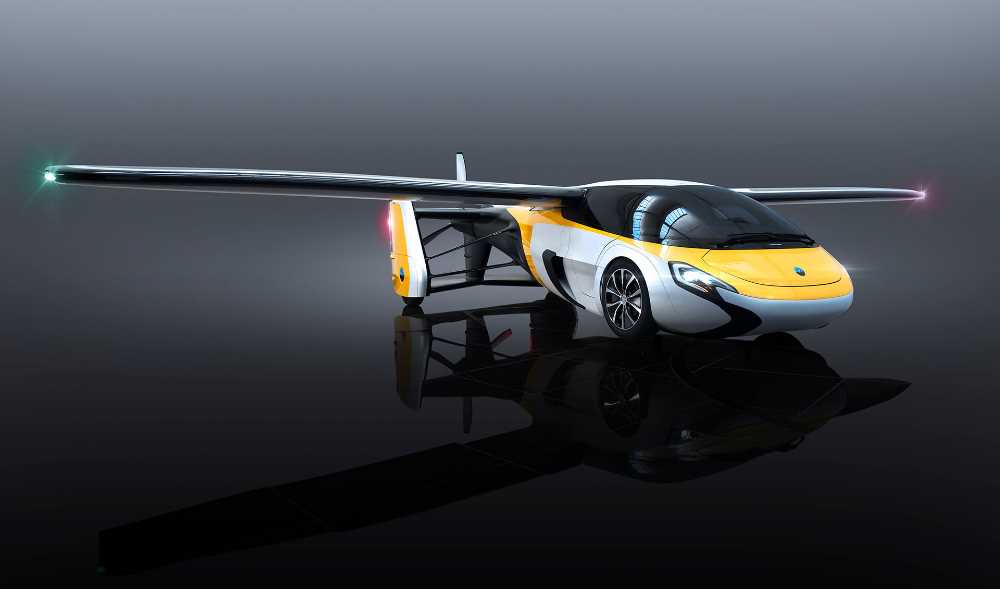 It’s from Aeromobile in Slovakia and boasts a vertical takeoff, a parachute system embedded, lightweight materials, stowable wings much more.  To me these vehicles are as exciting as early pioneer airplanes like the Bleriot, Silver Dart and Antoinettes. My interest in aircraft pretty much ends with the advent of metal frames. Biplanes, especially  pioneer aircraft, get my heart racing in a way very little else does. But modern flying car designs seem to be triggering the same effect on my pulse so I’ve been deep diving into flying car patents, having fun looking at the ideas pushing them forward. And yea, I’d go for a fly in one in a heartbeat. Hand me the waiver, strap me in and let’s go!

Quickly mute annoying autoplay videos
The single most annoying "feature" on webpages is autoplay.  How…
← Where the hell are the patents?
We use cookies to ensure that we give you the best experience on our website. If you continue to use this site we will assume that you are happy with it.Ok